So here we go. Another week and another dose off MMA opinion that will divide a nation. This week, it’s Keego on Nick Diaz. Well, not ON Nick Diaz but on Nick Diaz.

Firstly, Diaz is my favourite fighter. I really like the gimmick, the style and the belief he has in himself. He has consistently fought the best and has had exciting fights with everyone. He has been robbed more than once by the judges. That chip on his shoulder is fantastic to watch.

Diaz is just incapable of following the rules. Before anyone says ‘he shouldn’t be suspended for smoking a plant that is natural from the earth’, that is absolute nonsense! It doesn’t matter if you think it is a p.e.d or not. It is on the list of banned substances. That’s the end of it.

Looking at the disciplinary record of Diaz and starting there, he has failed 3 times. He has lied about his willingness to stop using it. All while they have raised the allowable limits of THC in the system by 300%. 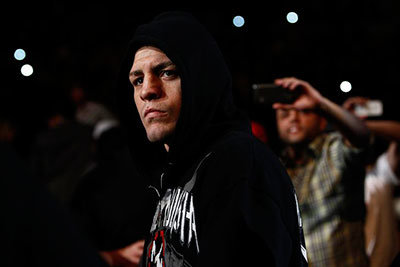 But the failure of drug tests isn’t the only thing that is causing aul nick problems. He has been involved in 2 brawls at different MMA events. Could you imagine showing up at another office and causing hassle?

I know that’s silly, I am just taking what nick has done and put it in the real (non-fight) world. If you repeatedly lie to your boss, fail 1 (let alone 3) drug tests and cause the kind of hassle he has you would be unemployable.

There are people comparing the bans of Diaz to that of Anderson Silva (1year for steroids) and Jon jones getting no ban. Again, this is complete uneducated nonsense. Silva got the standard 1-year ban as per the rules. Jones didn’t get a ban because cocaine (while illegal in the real world) is not illegal in an out of competition test.

That is why he didn’t get any ban. If he tested positive for cocaine in competition then he would have gotten a serious ban. His case is a police case based on charges, not a commission case. And the amount of money that went from his bank account to the pregnant lady victim’s account made sure to not get any charges filed.

I think it was Alberto Von Einstein (the owner of my local chipper) who said to me at 4 am one night over a scampi and chips, ‘The definition of insanity, is doing the exact same thing but expecting a different result’.

Sounds a bit like my favourite fighter, doesn’t it?

As usual, @nkeegan to debate