Dublin’s Neil Seery faces off against former title challenger and top contender Kyoji Horiguchi this weekend at UFC Rotterdam. Seery who is looking to continue where he left off when he goes toe to toe with the top 5 ranked flyweight in the world at the Ahoy Arena.

Horiguchi was matched up against the current flyweight champ Demetrious ‘Mighty mouse’ Johnson back in April 2015. Too soon for the Japanese fighter in many peoples eyes. But in a division where true top contenders are thin on the ground. Losing to a last-second armbar in the 5th round of their bout, showed both the tenacity and quality of the challenger. Proving a stiff test for the champion and earning the respect of many fighters and fans in the process.

But Horiguchi like many before him was thrown to the wolves. With plenty of fights under his belt. Yet a distinctive lack of top ten competition. It was simply too much too soon! A fate Olympian Henry Cejudo also fell foul of at UFC 197.

On paper at least Horiguchi is supposed to win this fight. His record and top 5 rankings speak for itself.

With Seery coming off his own win over Jon Delos Reyes at UFC Fight Night in Dublin Last October. And with the 125lb top 10 were all but cleared out. This is an outstanding opportunity for him to show he has what it takes to hang with the very best the division has to offer. 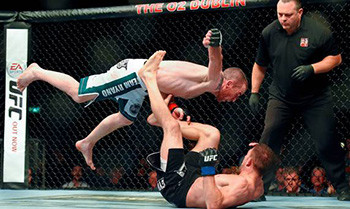 Having faced and defeated the very best in Europe. Seery knows what it is like to sit at the top of the pile. So no one should underestimate where he can take this fight.

Moving into the Top 10

While probably not catapulting him into the top 10. A win over Kyoji would most definitely set the Team Ryano fighter on solid footing and within a hairsbreadth of the top 15. With another follow-up performance which builds on that. There’s no reason why Seery shouldn’t be knocking on the door.

It would be a fitting finale for the former Cage Warriors Champion and one of the very best fighters to come out of the European scene. Expect everything when these two world-class flyweights put it all on the line this weekend in the Netherlands at UFC Fight Night Rotterdam.