We’ve all been there. Watching an MMA card with someone who has never watched one before. Yes, it can be fun to wow them with your incredible knowledge of the sport, and your super cool lingo, quoting Joe Rogan time and time again with them being none the wiser. And it can also be an incredible thing to witness that glow or twinkle in their eyes as they watch, for the first time, someone getting KO’d with a flying knee, or being submitted by a rear-naked choke. That simultaneous wonder and confusion that they display is an amazing sight, and one could almost say it’s beautiful.

BUT (Soothing background music stops), they often say some pretty stupid things! This will be a guide for all newcomers to the sport. I’ll do my best to full proof you to not sound like an idiot next time you’re invited to watch a card with some friends.

-“This UFC sport is pretty cool!”

– “Why aren’t they wearing boxing gloves?”

Although there is a lot of striking involved, there is also a big grappling portion to the sport. Boxing gloves make it very difficult to grab an opponent, set up takedowns, and to apply submissions.”

Yes, it’s distracting and in most cases pretty revealing, but, hey, it’s aerodynamic, flexible, and in some parts of Europe, pretty stylish! Made popular by Georges St-Pierre, a lot of fighters where them.

They wear cups. It’s just that getting kicked in the balls pretty much hurts no matter what.

-“Why are they trying to have sex with one another?”

They’re not. Each fighter is trying to use various techniques to advance their position and/or submit their opponent.

-“Why doesn’t he just pick him and slam him on the ground?”

Well, it’s actually pretty hard to do, unless your Quinton “Rampage” Jackson… 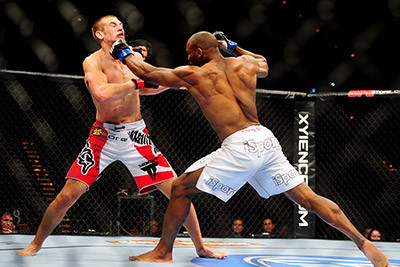 -“Wouldn’t a real boxer just beat these guys up?”

Boxing is an awesome sport, and boxers have great skills that transfer over to MMA very well. But there’s a lot more at play here, with kicks, knees, elbows, and the constant threat of a takedown really changes the game.

This is something James Toney, a former three-division International Boxing Federation Champion found out in his first and last MMA bout against Randy Couture.

No, well not exactly. He weighed that much… Yesterday. There are designated weight classes, and each fighter must achieve this weight at the weigh-ins. However, in most cases, the weigh-ins are 24 hours before the scheduled fight.

Therefore, fighters will cut weight for the weigh-ins, and then gain a bunch of weight for the next 24 hours until they fight. Fighters will gain between 15-30 lbs before they step into the ring the next day. It’s obviously a lot more complicated than this but that’s the simple version

So if your fiancé’s intimidating dad invites you over to watch the fights with him and his friends, and you don’t want to sound like a chump, then don’t say the above-mentioned phrases! If you stick to the plan, you’ll have lots of fun enjoying your first set of fights without sounding like an idiot.