MMA is the respectable fighting art

There’s just something about two athletes stepping into a ring to fight each other. And then at the end of it all shaking hands with one another as if to say “Hey I know we just beat each other’s faces into a bloody mess, but man, do I ever respect you.”

At the end of each fight, I sit there hoping that the fighters will go over to one another to shank hands, hug it out. Or perhaps what might be slightly overkill and sometimes a little awkward even get on the ground and bow to one another.

This might be an odd confession, however, I sometimes watch the post-fight interview with the sole purpose of hearing the fighters acknowledge their opponent’s performance and exchange compliments to one another.

Sportsmanship is the backbone of every sport. It’s role models from sports that kids look up to. That fans admire, and up and coming athletes learn from. These simple acts demonstrate many values and virtues that mirror those of our society.

To be sportsmanlike in a sport such as mixed martial arts shows how amazing some of these athletes truly are. There is a large stigma surrounding the sport, with many referring to it as a blood sport. I’ve heard people go as far as comparing it to human cockfighting or even bear-baiting (look it up, it’s pretty gruesome). 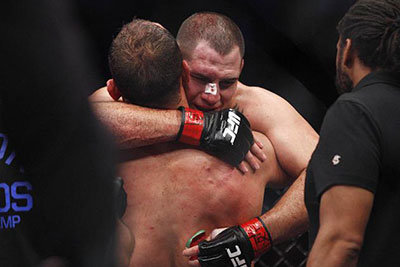 Watching Georges St-Pierre time and time again shake hands with his opponents and refrain from excessive trash talk (minus his terribly demeaning and distasteful outburst towards Matt Hughes at UFC 63.

With his famous line “I am not impressed with your performance“), is a perfect example of how mixed martial arts is not without sportsmanship. Moreover, those who think this sport is simply about two individuals trying to kill each other in a cage are truly uneducated.

One does not have to look far for examples of mixed martial artist who have consistently demonstrated sportsmanship throughout their career. Fighters such as Mirko “Cro Cop” Filipovic, Fedor Emelianenko, Lyoto Machida, Frankie Edgar, and Junior Dos Santos are perfect examples of genuine individuals who have been great ambassadors for the sport.

So next time you hear someone say that mixed martial arts are a blood sport, filled with a bunch of low life bad guys, you tell them to listen to an interview with the above-mentioned fighters! And if they’re still not convinced tell them to go watch Ping Pong.