Mike Winkeljohn or Coach Wink as he is affectionately known to some of the biggest stars in mixed martial arts. Is one-half of perhaps the most successful teams in the sport, Jackson Winkeljohn MMA. With so many of their top fighters on upcoming cards. We wanted to chat with the man himself about the secret sauce which makes his partnership with Greg Jackson work so well. What’s it like being a fighter at his gym? And get his take on one of Ireland’s own…

How are things at the moment, what’s the vibe like at Jackson Winkeljohn?

It’s good, it’s good, we just got done filming a commercial for Michelle Waterson, Invicta 105 pound champion. It was a little crazy with cameras, but, you know it’s good. I got Alistair Overeem in camp, Jon Jones in camp. You know Carlos Condit is coming in working out with the guys. I got Isaac Vallie Flagg and Cub Swanson just took off yesterday for Austin. So it’s quite active right now.

As you mentioned Cub, he’s fighting Frankie Edgar this weekend. How does he get the win over a seasoned veteran and a fighter who many rank in the p4p list? 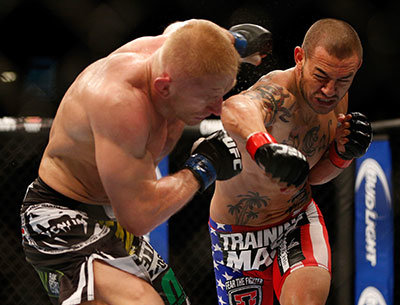 Am, Cub has got power. You know I think Frankie Edgar is incredible, I love his footwork, in and out. I like Mark Henry his coach, I think he’s a genius. But at the end of the day, Frankie can weather the storm, he’s got great conditioning.

But Cub Swanson’s got the power in that division, he really does. When he starts letting things go, he’s got incredible balance, he can do it from any place. He can hurt you.

So over in Ireland, we have one of our guys in the division making a lot of noise. Conor McGregor, what do you make of him?

Well, I think he’s a genius in that he markets himself. Good for him, I think he’s smart doing that and he can back it up. I love the fact that he said, something I’ve been trying to tell my fighters for a long time and that is. There’s a modern MMA fighter that uses movement, understands distancing and he’s that guy, I think that’s where the sport is going.

The sports going towards real athletic people that can strike from long range. And can get takedowns or defend takedowns from range. And a, he’s kinda become the epitome of that. He’s got great eyes, good focus, good accuracy in his shots, I think he’s great.

So in your opinion, what happens when he meets Cub? If not in their next fight, definitely at some point in their careers!

Oh yeah, you know, our job would be to make the design for Cub to win that fight. You know, it will not be easy. But how exciting will that be? Two guys that can actually strike very well from different ranges. Cub has got some great tosses, Conor McGregor can wrestle. Everyone’s got some advantages, some disadvantages. That’s what’s so cool about MMA, you don’t know what you’re going to get. It all comes down to a clash of styles sometimes.

Going back to Jackson Winkeljohn. Could you talk a little about your partnership with Greg Jackson? The dynamics of the relationship and how that all works? Do you guys ever fallout?

You know, I don’t think we have fallen out since day one. He’s like my little brother, Greg is. Ever since I met this kid, back when I was doing a lot of Muay Thai, kickboxing.

He was this kid sleeping in his own gym, behind a wall, no money to his name and a genius on the ground, self-taught. And I started working with him on the stand-up. And he started inventing moves with me on the ground and vice versa.

And ever since then, that was about 93. We started hanging out together, all the time working out together. And he started taking everybody off to the grappling tournaments. I kept the guy’s going on the stand upside.

Then MMA took off you know and the ultimate fighter took off. And we live in a place right now, we’re at high altitude, a mile up. People want a train because of the altitude conditioning, and I guess we got some okay coaching going on too.

You know we don’t fight at all. Pretty much the standup side, in and out of the clinch is my job. And in and out of clinch to the ground, he oversees it. And we trust each other and don’t really second guess each other.

It’s obvious you get great satisfaction from seeing your fighters do well? With so many World-class athletes in your gym. How would you describe your relationship with your fighters?

Well, I’m definitely the older guy, I’m 52. So it’s kind of good cop bad cop. Greg is the kind of guy that sits em down, calms them, he tells them all the positive things. Whereas I’m more straightforward. If you do X you will win, if you do Y you lose. I talk to them that way in the corner, we have specific tactics we have codes.

And I’m pretty straightforward and I guess I can be a jerk it that way. I think they appreciate the honesty, we both care. I want the best for my fighters you know, it’s not about us it’s about them moving their dreams. And I know if Greg and I do our job, we can help them live those dreams.

We just got to get them used to do uncomfortable things that they need to do, that they maybe would not do if I hadn’t pushed them to do it. And maybe now they can live their dreams.

I’m curious, with this busy schedule the UFC have got. Is that a good or bad thing for you, having to keep these fighters in tip-top condition. So many fighters fighting so regularly when compared to a few years ago?

Well, we have had to get a lot of help with the gym and stuff. Greg goes in early, he does a lot of the interviews and stuff, he’s much better at it than I am. I stay and train the fighters more. But it’s tough you know, we’re away from our families a lot. But we’re dedicated to helping the fighters out.

It’s quite crazy, but at the same time, it’s quite exciting because we’re with a sport that is just taking off and growing. And how lucky are we, that we’re not in a situation where things are just being downsized, like a lot of things in the world right now.

There are a lot of fighters getting injured in camps. How does that upset your plans, the regime you had in place for that camp. Is there any fallout from that? Is there any knock-on effect on other fighters camps?

You know what, it’s something that is sometimes unavoidable. I just saw stats the other day. We were on the lower part as far as percentage of injuries versus you know, how many fighters we have fought in the UFC. I think we have more fighters by far than anyone else in the UFC. But our injury rate was down, so I felt good about that. Although it does seem like we got hit with some big ones. Like Carlos Condit, Jon Dodson, Jon Jones have knee injuries.

But it’s a little bit about being crowded in our gym, a little bit. Not all that, with maybe 10% of our injuries that we can get rid of. So what we’re doing to avoid that 10% is we’re actually building a bigger better facility. That’s not going to be quite as crowded on the mat, a couple of cages instead of one.

You know, at the same time it’s going to accommodate more fighters from around the world. Because we have somebody already someone coming in from Russia and Europe and Australia etc. We’re going to have apartments and dorm rooms, so we’re just getting ready to take it to a different level.

That way with rehabilitation rooms with people on staff that can help people quickly. Help people out with the smaller injuries and as you know when they have little things going on with them. Those things can become bigger or their balance is not the same and all of a sudden they do twist something.

You know, when people are at the top, peak condition. Their eyes are there, the neurological is there, they don’t get hurt sparring nearly as much as when they’re tired, fatigued, something’s wrong or their mind is elsewhere.

With some of the most creative fighters in the world under your tutelage. How do you deal with each of these fighters and their own style? There’s obviously no one size fits all when it comes to these guys?

Yeah, that’s exactly it, that’s what I try to do. Especially on the stand-up side of it, that’s all my game. You look at what your fighter can do, what he’s capable of, his strengths. And you want to develop him to be as unpredictable as possible. Because that’s what makes it so hard for the other fighters to fight you.

Because they don’t know where it’s coming from when it’s coming from. So I look at fighting style, I look at what they’re capable of and I talk to them and find out where they want to go with it. And we just start developing new tools. Sometimes it doesn’t play out right away, but a couple of fights down the road, you start seeing those tools come out.

So her family are Irish American?

Oh yeah, that’s her family roots. We talked about it a lot in the boxing world. About getting over there and doing some things. And that’s Holly so, a new fan base for her, but I’m not talking about that. She would just love to be there and go back to her roots. How exciting would that be?