Is Miesha Tate Coming Back Again

Few fighters are best represented in a post-fight press conference following a harsh loss, Miesha Tate is one of those few. Physically injured and emotionally hurt, Tate sat and answered questions following her title loss at UFC 200. Whilst she obviously didn’t have to, it was another defining moment for the fighter, whether she knew it or not.

When asked about her performance, Tate simply said: “It’s not about me tonight; it’s about Amanda.” Though just a single sentence, the selflessness was respectful, refreshing and rare even if completely in character.

It was that honesty that made ‘Cupcake‘ a popular fighter to begin with. Though she’d been an elite Bantamweight fighter for years, it was Tate’s showing as a coach on The Ultimate Fighter that gained her most notoriety. Tate was the contrasting opposite to her rival coach Ronda Rousey.

And people naturally rooted for her as she headed into their title rematch. Nonetheless, Tate would come up short on fight night, showing heart before being submitted by armbar in the third round.

At that point Tate was 0-2 in the UFC, the former Strikeforce champion had been finished by both Zingano and Rousey and many ruled out her chances as a future champion. Tate was undeterred though and got back in the win column by outpointing Liz Carmouche and Rin Nakai.

However, some of the harsher MMA critics were unimpressed and expected Sara McMann to put an end to Tate’s new two-fight win streak.

It looked as though they’d be right early too, as McMann dropped Tate almost immediately, breaking her orbital bone in doing so. Tate weathered the storm though and in the middle of round two turned the contest into a scrappier, grittier fight.

It paid off too as a scramble led to Tate winning the second. The third round would be domination as the fighter formerly known as ‘Takedown’ impressively controlled the Olympic Silver medallist McMann for the whole round to win the decision. 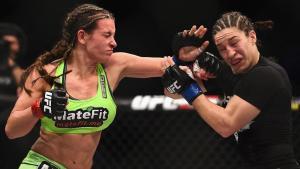 Now on a three-fight win streak, suddenly Tate was almost in line for another shot at her nemesis Ronda Rousey. She would secure that title shot too, once again coming back from a rough start to defeat Jessica Eye comprehensively on points.

Now seemingly the number one contender, ‘Cupcake’ watched on as Rousey’s hype multiplied with a quick finish over Bethe Correia. However, Tate wouldn’t get her shot, the UFC instead opting for the unheralded Holly Holm.

Disgruntled and frustrated, Tate flirted with retirement before on November 14th 2015, everything changed. It was on that night that Holm dominated Rousey with her sublime striking, eventually knocking her out unforgettably with a left head kick.

As it became clear that Rousey wasn’t going to be back for the rematch for quite some time, Holm admirably opted to defend her title and suddenly Tate was the only real viable option. As great as the opportunity was, most felt that it was an almost impossible task as we all were collectively swept up in the Holly Holm momentum.

When it came to fight night though, the fighters were very much equalled. However, other than a dominant second round, Tate was mostly controlled at range even though she wasn’t taking much damage.

Then, in one of the most dramatic finishes in UFC history, Tate scored one final takedown in the fifth round, taking Holm’s back and choking her unconscious. Undeniably one of the great championship wins, Tate’s fame and momentum skyrocketed, after years of fighting, Tate was now standing on top of the division.

UFC 200 Was The Perfect Fit

A spot on the now infamous UFC 200 card was the perfect fit too and Tate would do her part in the promotion for the mega show, doing multiple media tours on a variety of different platforms. It seemed as though the UFC had committed to Tate as their latest superstar, especially considering Rousey’s absence.

On fight week, Dana White would even move Tate’s fight with challenger Amanda Nunes to the main event following Jon Jones drug test failure, and though it was a controversial move, as the only legitimate title fight it was, in my mind, the right one. 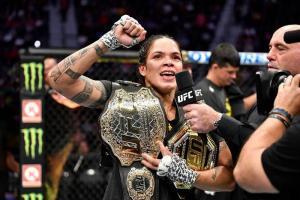 Unfortunately though, as has been proven so many times, that octagon is an unpredictable place and UFC 200 was just another example. Amanda Nunes’ notorious early aggression showed as she stunned Tate quickly before submitting her with a rear-naked choke to become the new champion.

And that brings us to where we started, the former champion Tate bruised and battered, sitting answering questions when she didn’t need to. It was a harsh defeat but for Tate, this is nothing new, in fact, it’s just another chapter.

Miesha Tate has suffered devastating defeats before and knowing the nature of this wild sport, likely will again. What makes Tate special though is her ability to always bounce back regardless. When all the chips are down, on more than once occasion Miesha Tate has found a way to win.

Though her stay as champion was brief, Tate is a respected and revered fighter with or without the belt. Fighting for ten years, Tate is a pioneer that’s still one of the world’s best. An indelible mark already made, at UFC 205 Miesha Tate looks to start one more major comeback.

“One loss and one win, neither one defines me.”

Images courtesy of thefighterlifestyle.com and foxsports.com