Michael ‘Venom’ Page: How Far Can He Go?

In February of 2012 professional MMA witnessed the birth of a sensation by the name of Michael ‘Venom’ Page. An already decorated martial artist with honours in Kickboxing and Sport Karate. Page became dissatisfied with the exposure of these other sports, and their loss was ultimately MMA’s gain.

‘MVP’ as he is appropriately known to some couldn’t have hoped for a better debut in his new career. Displaying an outrageous, dynamic and unorthodox fighting style. Page dazzled his hometown support before finishing his opponent Ben Dishman, with a sensational highlight reel tornado kick after only a minute of the first round.

Page is a pure martial artist in every sense of the words, having been thrust into various disciplines from a young age at the hands of his father, Curtis Page. Who himself is a former three-time world kickboxing champion. It was a natural progression for Page to arrive at top level MMA one day. Having first competed in kickboxing at the age of 5 and has been competing ever since.

After going 3-0 with three first-round finishes, Page announced that he had signed a five-fight deal with Bellator MMA. And on March 23 made his debut with the organisation doing what Michael Page does best, you guessed it, winning via first-round KO. 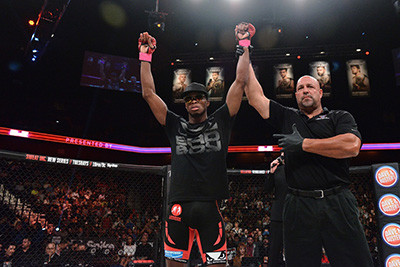 The London born fighter of Caribbean heritage is now 9-0 in MMA with all but one of them victories coming as first-round finishes. Nah-Shon Burrell took Michael the full three-round distance at Bellator 128, but despite not getting the finish. Page received widespread praise for his performance and was once again drawing comparisons with pound for pound all-time great Anderson ‘The Spider’ Silva.

Page is evolving, and on April 22 he will have the opportunity to show to the world just how far he has come. And possibly shed some more light on to how far we think he can go. He will face Jeremie Holloway on the Bellator 153 card that sees the main event bout for the title of Page’s welterweight division. A contest between champion Andrey Koreshkov and the debut of the promotion’s marquee new signing Benson Henderson.

It’s not completely out of the question to think that another impressive performance and finish from Page. Could earn him a shot at the winner of Koreshkov vs Henderson before the year’s end. But surely at the very least a top 5 contender with fellow Brit Paul Daley standing out as the most interesting matchup at the top of the division.

No disrespect to Bellator, but when we talk about the elite level of MMA. The UFC stands on its own, head and shoulders above their rivals in terms of strength and depth of quality world-class competitors per each division. One would think that it’s only a matter of time until the UFC snap up Michael Page. Considering his uniqueness and excitement, he brings to the table, as well as being an extremely talented martial artist.

I feel that should Page make the jump to the UFC, all the questions will be asked that are usually asked of talented fighters that come from a stand-up background. How will he handle a top wrestler? How’s his jiu-jitsu game?

These are fair questions to ask, and there are many potential opponents in the UFC’s top 15 rankings that will test the ability of Page in these areas. I think of fighters like Damian Maia and Johny Hendricks in this respect.

In London Shootfighters though, led by former Olympic wrestler and long time BJJ and Judo practitioner Alexis Demetriades. Page is certainly in the right place to prepare for such challenges.

I think it’s fair to say that there is only so far Bellator can take Michael Page on his voyage to become an icon of mixed martial arts. As with any up and coming fighter, the true measure of their potential can only really be determined when they enter the door of the octagon.

It’s unknown at this time if Page will make it to the octagon door. But personally I would go out on a limb and say it’s only a matter of time. The man is just simply a must-see fighter, even for those who are not overly enthusiastic about mixed martial arts. If you see Michael ‘Venom’ Page in action, you’re going to take notice. And it’s unlikely you will forget about him any time soon.

As far as how far the English man can actually go, I feel as his competition gets stronger. His approach will have to become a bit more calculated. But based on raw talent alone, Michael ‘Venom’ Page has all the attributes to one day sit on the list of the world’s pound for pound best fighters. Along with the likes of Jon ‘Bones’ Jones and Demetrious ‘Mighty Mouse’ Johnson.