“How’s my buddy Conor?”… who Conor McGregor?  “Yeah, how’s he doing? Tell him I love him, I miss him.” John Hackleman aka The Pit Master says. Full of praise for the current crop of Irish based fighters breaking through in the UFC and their coach John Kavanagh.

Hackleman who is head coach at The Pit gym in Arroyo Grande California. Home to former Light Heavyweight Champion Chuck Liddell and current LHW contender Glover Teixeira, amongst many other fighters.

Taking his knowledge from years of both training and competing in a variety of Arts. Fusing everything he had learned into the now infamous Cross Pit Training regime. He has trained everyone from kids to World Champions since way back in 1985. Long before what we know today as MMA ever existed.

I wanted to chat with John about his own life and rich history in combat sports. How The Pit came to be and the very close relationship he has with all his fighters, which come fight time, can be a real emotional rollercoaster.

I also wanted to find out a little bit more about the private side of the Iceman. Discuss Glover Teixeira’s upcoming fight at UFC 179 and how John views his own standing in the history of the sport.

Born in New York but raised in Hawaii, do you consider yourself a Hawaiian or a mainlander?

Ammm, I don’t like labels..I consider Hawaii…This is not politically correct…I consider myself Haole pride, Hawaiian roots. So Haole means white, but I got roots in Hawaii.

Did you feel like you fitted in, in Hawaii or did you always have problems with the natives?

No, no. I mean to be honest when I was young, in grade school I had issues and then once I started training really hard with my instructor who was a really really really hardcore guy. He was like the bad guy, the bad Sensei in karate kid, you know.

He was like, when you go to his gym, you toughen up quick or you go and I started training there when I was ten. So I’d say by the time I was 11 or 12 my bullying issues were long gone.

14! I say I was cornering since I was 14. But to be honest, my cornering was sitting on the stool in between rounds, so I was fighting. So when your team fought I’d help in the corner. Then when I joined the army in the boxing team for my division, I was always in the corner.

So when I was a teenager, the cornering I was doing was drinking the water in between rounds, cause I was fighting. It was completely legal, I was amateur. I was fighting in the police athletic league. So it was legal and sanctioned, it was perfectly legal.

My first no holds barred fight, you know I lied about my age and said I was 18 when I was 16, so I don’t know how legal that was. But my boxing was all legal.

While in the army you won the State and regional Golden gloves titles?

He goes “Well, hey aren’t you John Hackleman, you fought in the golden gloves right? Cause he happened to be from Hawaii. I said “Yeah,” he said, “Why don’t you join my army boxing team?” “What does that mean?” “That means, that’s all you have to do”. I said Okay!

When you left the army you went into professional boxing, for a time under Don King. Did you have many dealings with him?

No, to be honest, I had a lot of sanctioned and unsanctioned fights. I was a hard hitter, I was a tough guy. But I fought for Don King I think twice, but I was really low on the show. I was never the main event boxer.

I think I fought semi-main a couple of times in smaller shows. I was never rated in the top ten or even the top 20 in the world. I was just a tough guy that boxed, kickboxed. Pretty much any type of combat sports which came along.

The Ethos at The Pit Gym

For younger kids, we like to focus a lot on anti-bullying (let no one take your lunch money!) Does that spring from your time growing up in Hawaii and being bullied yourself?

Yeah, yeah. I do that because back home, lunch money was a quarter..back when I was a kid and that was a big deal at school you know. The big local kid would come up and go, “give me your lunch money”. So when I was younger that was one of my big fears. So ah, I push that hard now, you know I was bullied for a while.

But I also see a lot of bullying. Besides the bullying in Hawaii, I have to say some of my best friends are from Hawaii. And ah, we’re going back next month and you know, I loved a lot of my teachers. Couldn’t stand some of them. There was actually racism with teachers too, which is pretty funny. But I also have some of the greatest teachers and role models ever in Hawaii.

Some of the local guys always had my back, so it was a mix of having to fight a lot and prove myself. And finding a culture which was really supportive and family-oriented.

You look at a couple of examples, I mean Chuck Liddell. Chuck Liddell is one of the most family-oriented, kind-hearted people I have ever met in my life and look how tough he is. And that list goes on and on. I mean you have fighters in the UFC who are blood and guts, just killers.

And outside the cage or the ring. These guys are just loving sensitive, caring, well-spoken articulate guys. It’s that warrior spirit and it’s one of the main reasons I love this sport.

So Who is The Real Chuck Liddell?

Going back to Chuck for a second. Obviously, he has the public persona of the hard-hitting MMA fighter. But what’s he like when you sit down one on one and have a beer? 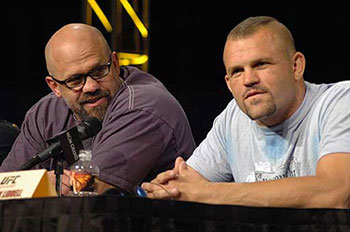 He’s like the guy next door, you would never..if you stopped him on the street and asked him to borrow and quarter. He would treat you with the same respect and dignity that he would if you were the president of the biggest company in the world or you were world-famous.

If you were Donald Trump, he would treat you the same as he would a homeless guy on the street asking for a quarter. He treats everybody with respect. He’s never turned down an autograph or a picture in his life. And he’s loyal to his people, family and friends.

So when you sit down and talk to him, he’ll talk to you about anything from football to sports, to politics, to skateboarding. You’ll never ever… if you didn’t know who he was, think he was Chuck Liddell or a superstar in any way.

What was it like towards the end of his career, seeing him get knocked out so many times, it was like the end of an era in the sport?

It was bittersweet, I’d been wanting him to quit for a while, you know. I don’t like to see my guys get hurt. Some of them I’m so close to for so long. I asked him to quit a few times, we went back and forth. I knew he had to do what was in his heart, not what was in my heart or Dana’s heart or anyone else. He’s the one who had to decide that.

Following His Loss to Rich Franklin

You said yourself that you are a sensitive guy, you love chick flicks. What’s it like seeing your fighters going into fights, getting injured when you have such a strong bond with them. Seems like it must be an emotional rollercoaster for every fight?

Yeah, well it is. That’s one reason why I’m trying to slowly back out of the sport and get more into the martial arts aspect, anti-bullying and the fitness. Making a better life for adults and kids, um. It’s hard, it’s become harder and harder, super emotional for me and my fighters know it, you know. I get more emotional than they do win or lose.

They’re usually cuddling with me in the corner or in the dressing room after a fight. Trying to wipe my tears away because I’m more upset than they are. And before the fights, they’re telling me, “Coach relax it’s fine!“. I’m more worked up than they are and that’s been since Chuck is fighting.

Now my son fights and I can barely even see straight. If it’s my own son or Court McGhee or Steven Siler or Castle or Antonio. You know, any of my guys. It’s not a pretty picture and I’m looking to train some guys once in a while, not work their corners and just be a martial arts guy.

I want to be, the is it. My life’s ambition is to be like a combination Mr Miyagi, Richard Simmons and the drill sergeant from Full Metal Jacket. If I could be all three of those people all rolled into one. My life would be complete (laughing), and if you ask Chuck and Antonio, they think, into that trio of people you have to add Grand Torino with Clint Eastwood. They think, Chuck and some of my guys. That character reminds them of me, which I don’t see at all.

Glover is fighting Phil Davis in a few weeks. What has he had to change up since his loss to the Champ Jon Jones, what’s different about this fight? 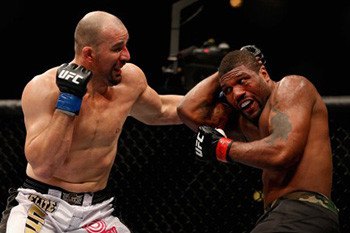 Everythings different, that’s what I love about MMA. It’s so much more a strategy than just slugging. But I don’t think he has to change up anything. You know he got hurt in the first round against Jon. He did a really good strategy.

So I think he has just too much power and equal speed and that one punch knock out power is going to be a determining factor. Whether he lands it or not, just the fact that it’s there.

Always creates a, you know, a different strategy for every opponent. Just like it did with Dan Henderson, Fedor or Mike Tyson. If people have that one-punch knockout power, their opponent always has to account for that in their strategy and their training and it usually makes for a whole different fight.

One of The Pioneers of MMA

You have been one of the pioneers in the sport of mixed martial arts. Looking back on your career many years from now. What would you like to be remembered for?

Ah, I think a combination of a hardcore guy who trains really hard and has the old martial arts values. I want to be known for taking people in and making them realise their dreams. Whether it’s Chuck Liddell, where I helped him realise UFC titles or you know, six-year-old kids getting picked on in school.

You know, making him have more confidence. Yeah, I just want to be remembered as somebody that gave to my martial arts students, as my students give to me.