In the wake of an underwhelming UFC 200 and amidst the sluggish politics of the companies sale. The second coming of the fight no one seemed to want at the outset has become all anyone in MMA is talking about. Anyone who felt that Conor McGregor’s star may have dimmed in retrospect to his loss to Nate Diaz at UFC 196 may have to brace themselves.
As his notoriety seems poised to carry the PPV buys 202 far beyond what was mooted ‘the biggest, baddest card of all time’. With Jones and Brock staring down the barrel of a ban, and the women’s belt being passed hand to hand. The new owner’s now must look to McGregor to put the shine back on the logo.
But beyond the financials, which Conor himself is no doubt keeping an eye on – this one seems to carry something more. To use a well-worn phrase: this time it’s personal. McGregor has always described his opponents as mere passing faces in the fog, the ultimate goal being to follow the win or learn philosophy that his coach, coach John Kavanagh has instilled in all his SBG alumni. But in Diaz Conor McGregor has found his Joe Frazier, a man who will not be drawn by the mental warfare, a man who only cares about the fight.

Conor McGregor Inside the UFC Octagon 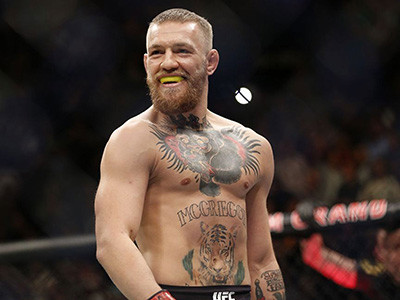 But in all the fast-talking and expensive suits of The Mac Life, it’s easy to forget that the only place McGregor feels truly alive is on his feet, with the door of the Octagon firmly closed. It is the reason he takes on all comers on late notice, why he piles on pounds and jumps into the water over and over.
With injured knees and random opposition, when others would sit it out. He wants to see who can live with him in the deep. Diaz is one such man, and in March he pushed an underprepared Conor to breaking point. But like all great fighters, like Ali when he faced his old enemy Frazier for the second time in the Philippines in what is now recognised as one of the greatest fights of all time, he may discover that breaking point is where greatness is often found.

It is somewhat ironic that it is now the Stockton man who now flaunts bulging biceps on Instagram and is snapped with fight celebrities like Jean Claude Van Damme while Conor, while not exactly hiding when he is interviewed, gives a sense that understands exactly what he has to do. The sparring partners opposite him are now Olympic, the Jiu-Jitsu players are International and in contrast to the crazy run of 2015 that saw Siver, Mendes and Aldo dispatched with ease, the madness has settled and things at SBG seem controlled, disciplined and ready for war.

Far less adaptation is required – diet, sleep regimen and the scheduled twice a day session reflect a refreshed and focused man – he is training like a champion. Motivation is key to any fighter. Post Jose Aldo’s 13-second demolition, with his goal of the belt achieved. McGregor was left without a goal to visualise and charged into battle against anyone to find a challenge. He would be the first to admit, mistakes were made.
With less and fewer days on the clock and the world watching – this time it is not a title being sought, or even applause. Conor McGregor has found his motivation, is finished with mistakes – and is coming for redemption.

Article by Brian Dolan follows him on Twitter @Doledemort.