McGregor vs Mayweather: What are the Chances?

When the back and forth banter between Floyd Mayweather and Conor McGregor first commenced. Both fans and talking heads began to play with the idea of “What if..” What if these two were to ever meet and duke it out, what would happen? Surely Floyd, with his untarnished 49 – 0 record in boxing would make light work of the Caveman.

The fight would be a joke, it may not even go past the first round. The MMA guy won’t even land a punch, not one. And when Floyd decides to do so, he will end the fight how he chooses and when he chooses. I don’t know about you, but I was convinced. 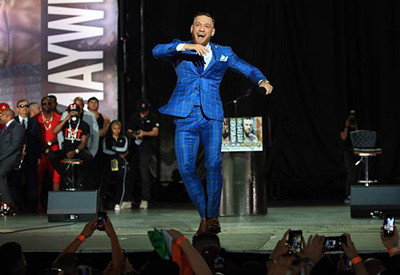 Never knocked down, never been defeated. Floyd has built his career on making the best in the World at boxing look average. Canelo Alvarez, Oscar De La Hoya, Manny Pacquiao to name a few. But there were 46 other names to add to that list. Fighters who thought they had the secret formula to smash through the mystique.

Now as Floyd reverses his way back out of retirement. In the quest to break the record set by Rocky Marciano of 49 – 0 in professional boxing matches. Who will accept the unenviable task of trying to make it a legacy-destroying 49 – 1?

In steps an MMA Fighter

In steps one Conor McGregor, an MMA fighter who has never competed in professional boxing. But, who has become the first athlete to hold titles in two weight divisions simultaneously in the Ultimate Fighting Championships. A guy who in just 4 short years has become the biggest name in all Mixed Martial Arts. And now a guy with whom Floyd “Money” Mayweather will look to make history.

On paper this fight makes little to no sense, “Floyd will destroy him,” he’s not on his level. Being told since day one that this is a done deal, even the odds-on bookies such as William Hill giving 1/7 of a Mayweather win vs. 9/2 on McGregor. Will it be just another day in the office and yet another record-breaking payday?

At which point Mayweather will finally call it a day? Either way, there’s money to be made and betting on boxing online is easier than ever in 2017 due to the latest betting apps where you can just open and wager on your device anytime, anywhere with mobile internet of course. It makes sense to throw a few bob at the biggest boxing event we have seen in our lifetimes.

But this Irish kid, he’s got some special. It’s brought him this far in the fight game. How much further can it take him? Can he truly shock the World and beat one the greatest boxer to have ever lived, at his own game? I certainly won’t call it. It’s a fight and anything can happen. Odds were meant to be broken, as ruled. And if you listened to Conor, “The whole World’s gonna eat their words.” He might he actually have you convinced?