On November 21st 2003, Matt Hughes and Frank Trigg entered the cage to fight each other for the first time. Fast forward thirteen years later and it’s a rivalry that created a fight. That is still talked about as one of the most memorable in the sport’s history.

Though some may find it hard to believe now, at the time many felt that Trigg was one of, if not the toughest opponent of Hughes’ career to date. That’s telling of Trigg’s reputation back then too, considering that Hughes had defeated men like Hayato Sakurai and “The Ronin” Carlos Newton. During his recent twelve fight win streak. Hughes had also been the UFC champion for two years. Using his dominant wrestling and physicality to dominate the division.

Though Trigg didn’t enter on a streak quite as spectacular as Matt Hughes’, Trigg’s 10-1 record was certainly still impressive. Trigg was three years removed from his only loss too. And had since won three straight to become the WFA Welterweight champion.

The links between Hughes and Trigg were inevitable with both men being champions in opposing promotions. And fans wanted to see who would come out the victor if the men fought each other. Fortunately, on November 21st 2003 at UFC 45, fans would find out the answer.

Some pre-fight disagreements about whose wrestling background was more impressive. Only elevated the intrigue too and now it was time to see who the real champion was.

Keen to prove his point, Trigg immediately scored a double leg takedown. And shook off a Hughes guillotine attempt to secure top position. Hughes would quickly escape though and the two would begin scrambling for position.

Hughes Carrys Trigg to His Corner

Eventually, Matt Hughes would lock his hands before picking Trigg up. And casually walking with him on his shoulder before slamming him to the mat violently. However, though he’d be controlled briefly, Trigg would admirably fight himself back into top position. 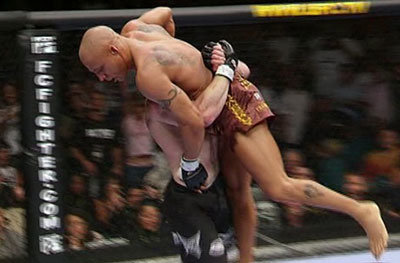 Hughes was prepared for this possibly though and reacted perfectly, spinning out and taking Trigg’s back. Aware of the danger, Trigg stood up but Hughes stayed on his back, looking to synch in the choke.

Suddenly, Trigg was in serious trouble but continued fighting Hughes’ hands as he looked to fight the choke. In the end, though, Trigg was forced to submit before collapsing backwards with Hughes on his back. Creating one of the UFC’s most memorable visuals. Following the fight, as is usually the case, the two men embraced.

The win would position Hughes for defence against one of the world’s best Lightweights: BJ Penn. Though Penn was moving up in weight. His undeniable talent made the fight an intriguing one even if Hughes was still the favourite. To the surprise of many, Penn would put an end to Matt Hughes’ legendary title run. Submitting him in the very first round to become the UFC champion.

Hughes would return to the octagon five months later, fighting and defeating Renato Verissimo at UFC 48. In the co-main event that night. Trigg would also be returning in his first fight since the Hughes loss, stopping Dennis Hallman for the second time. The Welterweight division was without a champion at this time. With Penn leaving the UFC and therefore vacating his title.

Facing Georges St-Pierre for the Title

Matt Hughes’ rebound wins earnt him a shot at the vacant welterweight title, his opponent would be Georges St Pierre. Though he had been incredibly impressive thus far. ‘GSP’ was still just seven fights into his professional career and the experience gap was a massive one.

Nonetheless, St Pierre would start well, scoring an early takedown and being competitive in every area. However, with just one second left in the round, St Pierre would submit to an armbar. Hughes was once again the UFC Welterweight champion. On that same night, just one fight prior Frank Trigg finished Hughes’ last opponent Verissimo, something that Hughes couldn’t do.

With both Trigg and Hughes winning on the same night and Hughes now back as champion, a rematch only made sense. Trigg had been regularly calling Hughes out too. And desperately wanted the opportunity to show that the last result was simply the result of an off day on his part. The fight was booked for April 16th 2005 at UFC 52. 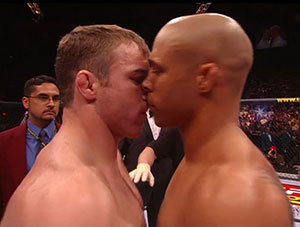 In one of the sport’s most famous staredowns of all time, the two rivals came nose to nose before Hughes pushed Trigg away. As the fight began, both quickly engaged in the clinch. Trading knees as Hughes slowly pushed Trigg back. However, soon the fight would change dramatically as a Trigg knee went low or as the great Joe Rogan so eloquently put it, “he got hit in the balls!”.

Hughes pulled away hurt but the referee didn’t see the foul and so the action continued. Trigg chased the champion as he had every right to and cracked him with a hard left hand. Whether it be due to the knee or the following punches, Hughes was dropped and hurt.

Sensing the end, Trigg reigned down with ground and pound. Almost finishing the fight but Hughes showed just enough defensive capability to keep the fight going. It was all Trigg though as he took mount, continuing his ground and pound throughout. Hughes managed to regain some control. Holding tightly onto Trigg in order to stop his flurry of strikes.

It was clear that Hughes needed to escape though and he tried but in doing so, gave up his back. Desperate for the perfect revenge, Trigg tried to finish the choke. But Hughes fought the hands diligently until trying to stand up left his neck exposed. 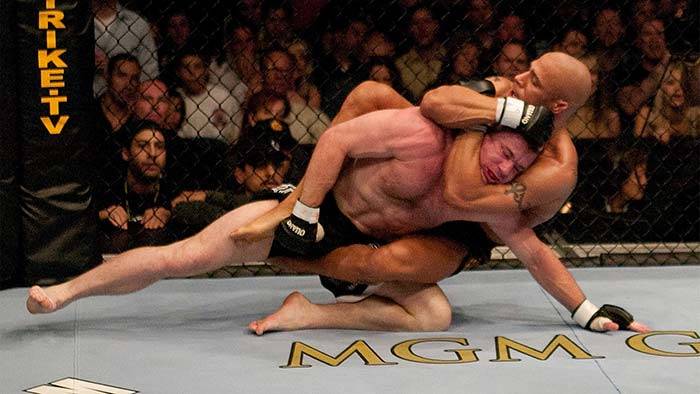 Unfortunately for the challenger though, the angle of the choke just wasn’t tight enough and Hughes escaped. At that very moment, a look of concern came across the frustrated Trigg’s face. Hughes would quickly give credence to his concern too. Once again locking his hands. And literally running Trigg across the whole cage to complete one of the most memorable takedowns MMA has ever seen.

The crowd was simply electric, the drama indescribable. From there it was almost a formality as Hughes immediately mounted the now worn challenger before using ground and pound to force Trigg to give up his back.

To his credit, Trigg would fight the choke as much as possible. But that only led to more punishment from the suddenly dominant Hughes. As the damage grew. Trigg’s hopes dwindled and after just over four minutes of electric action. He succumbed once again to the rear-naked choke.

One of the Best Fights in UFC History

Though the time, finish and winner was virtually identical, the second fight had been much more thrilling and exciting than the first. That’s not to slight the first battle either, it’s more just indicative of how special that incredible fight and comeback really was. To this day it’s pointed to as one of the best title fights in UFC history.

Following the fight, Trigg’s attempts at getting back into title contention failed. As he was finished by a more mature and complete Georges St Pierre than Matt Hughes had previously fought. On the other hand, Hughes’ win streak continued as he defeated Joe Riggs and Royce Gracie before avenging his loss against BJ Penn and successfully defending his belt. Less than two months later though, his second title reign would come to an end as was stopped by St Pierre. Who would eventually win the rubber match between the two as well.

The St Pierre loss would be Trigg’s last UFC appearance for four years. As he spread his next nine fights across multiple promotions, winning all but two. Unfortunately, Trigg’s eventual UFC return was an unsuccessful one. As he was finished by Josh Koscheck and Matt Serra, he would fight just three more times before retiring on a loss to Jim Wallhead in the UK.

For Matt Hughes, he would continue to fight inside the octagon. And even had a slight revival with three straight wins prior to a quick KO loss to his old foe BJ Penn. Hughes’ next fight would be his last when he was stopped by Josh Koscheck, in a clash of opposing Welterweight generations.

Whilst Hughes and Trigg have very different legacies now, inside the cage they created a quite unique and thrilling rivalry. Though he came up short in the end. Trigg was certainly an elite fighter and more than that proved to be a great match for Hughes in style and personality. For Hughes, it’s a rivalry that perfectly encapsulates what made him such a special champion.

He just always seemed to find a way and it led him to a legacy as one of the greats that still stands strong to this day. Every great fighter needs a true rival. And Hughes was lucky enough to have more than one. Regardless of where you rank Trigg in history. This rivalry and the fights that came from it will always be remembered as some of the sport’s most memorable.

It was a combined eight minutes of pure excitement and drama that will never be forgotten.