Interview with “The Machine” Mark Hominick

Mark Hominick discusses his career, current topics, some fun stuff and all things Canadian. Mark “The Machine” Hominick is a retired professional Mixed Martial Artist who has competed in organizations such as the WEC, Affliction, and the UFC. Throughout his career, Hominick has amassed wins over the likes of Yves Edwards, Jorge Gurgel, Brian Caraway, Yves Jabouin, Leonard Garcia, and George Roop.

After stringing together five consecutive victories, Hominick earned himself a title shot in the newly incorporated UFC featherweight division at UFC 129 in Toronto. This would be the first title fight in UFC featherweight history. And it would be against one of the pound for pound best fighters in the world in Jose Aldo. After a four-round war, Hominick came out for the fifth and final round and would push the pace for the remainder of the fight.

After landing an early takedown, Hominick rained down punches on the tired Aldo. Constantly pressuring him and looking for the finish. However, Jose would survive the round and become the first Featherweight champion in UFC history. Although he lost the fight, he not only earned the respect of his opponent. But earned the respect of the thousands in attendance and those watching the fights from home. After the fight, Dana White mentioned that “He’s a tiny guy with a huge heart.”

Hominick has had an amazing career as a professional fighter and remained a class act throughout his career. Many believed he was the greatest featherweight fighter to ever come out of Canada. But at the young age of 30, Hominick decided to hang up his gloves for good.

Since retiring, Mark has made a seamless transition from fighter to coach. Now as the successful gym owner of Adrenaline MMA, Hominick spends his time training others in the art and in the sport he loves. When speaking with Mark I had the opportunity to ask him about his career. His thoughts on current topics in the UFC, and a few fun questions about himself. Here is what he said:

Can you recount what it was like stepping into the Octagon against Jose Aldo at UFC 129 for the first featherweight title fight in UFC history in front of basically a hometown crowd?

Well, I knew I was part of something special. First, I’m from Ontario, and that was the first live MMA show in the province’s history, so that was something in it of itself. And I mean, I was co-headlining the main event against one of the best pound for pound fighters in the world. And I just tried to enjoy every step of the way and took advantage of the opportunity.

• That last round when you were on top of Jose, what was going through your mind? Could you hear the crowd or your coaches? Or did you just block everything out? 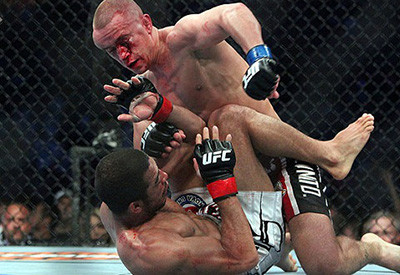 Hard To Finish Aldo Later In The Fight

But being so late in the fight I knew it was going to be hard to finish him but I was doing my best to give him a reason to get out of there. And he’s shown (Jose Aldo) that later in fights he starts to coast a bit. And I’ve always found that the longer the fight goes I always feel I’m stronger so I tried to take advantage of that.

• Since transitioning to a coaching role there’s been a lot of discussion surrounding head trauma in MMA. Have you made any adjustments in the way you train your athletes?

If you think about it, it’s a pretty young sport when you compare it hockey, soccer or football. Those sports have so many years of experience and training. And I was part of this sport when it was still in it’s feeling out phase. Back then we didn’t know, we would ask others how they did training camp because no one really knew the best way to get the best performance outcomes.

And even later into my career, hard sparring took a lot less of a major role. But yea, we’ve made changes, and obviously sparring still has its place in training. And I don’t think fighters should completely omit it but definitely limit it to once a week will be important in reducing damage.

But you learn and grow, and I think that’s a lot of what this sport is. It’s continually evolving with new techniques and training methods like the old school thought. Was that sparring was the most important aspect and know I think we’re moving away from that.

What do you think of GSP doing a training camp to decide whether or not he wants to come back?

I think if there’s been one real mentor on how an athlete should carry himself it’s George St-Pierre and he proves it again by doing it this way. I think this a real smart way of going about it, he’s going to see how he feels at the end. And know if he still has the same ability and motivation that he once had and makes an informed decision off of that, and I think that’s a really smart thing to do.

Who are you hoping to see come out with the win between Aldo and McGregor? 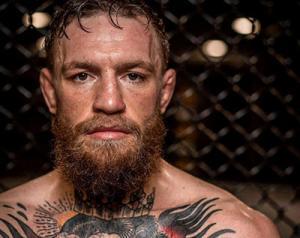 In all honesty, I’m cheering for Aldo because of how long he’s been the champion and he’s beaten the who’s who of the division. And I think he’s proven it time and time again. But there’s always someone coming up and I think Conor McGregor has done a great job marketing himself. And getting to be the number one contender by beating Chad Mendes regardless of how short his training camp was. Conor’s beaten all the top guys in the division other than Frankie. But again I think Jose has the edge in this one for sure.

I think early on in the fight Conor is going to be dangerous for Aldo because of he’s so unorthodox, aggressive and very confident. But yeah, the longer the fight goes, I think the experience will take over and allow Aldo to go home with the belt.

Frankie Edgar is set to face off against Chad Mendes, what are your thoughts on the fight and who do you think is going to get the win?

I think that’s a crazy fight, it’s unfortunate that Mcgregor didn’t have to go through Frankie Edgar because I think that would have been one hell of a fight. But yea, Frankie is just one of those guys that you can never count out. Every time he’s in a fight I never bet against him because he has so much tenacity and so much heart. He’s like a little pitbull so he’s always a pick in any fight for me.

But Chad, I mean I’m a big supporter of his as well so I’m definitely excited. But I think the experience, especially in big fights goes to Frankie. Anytime he’s in a big fight you have to put your money on him.

Fun Stuff and All things Canadian:

If I asked you to do as many push-ups as possible right now, how many do you think you could do? Give me a ballpark and all I’m saying is I did 25 this morning and I’m a skinny journalist.

In a row?! Probably a hundred, but it’s something I do every day. I’ve been an athlete my whole life so it’s just something that’s ingrained into me.

Now I tell you that you can face off against Jose Aldo right now to avenge your loss, but you have to choose a different sport. What sport are you going to choose?

Umm, definitely not soccer… I think it’s an easy one; I have to go with hockey. I think I would destroy him at hockey!

You Vs Mike Goldberg in an arm-wrestling match who wins?

Umm, I’ve got some pretty bad shoulders so I’d have to go with Goldy on that one. He used to play hockey to I think so he’s got to be a little athletic. And yea he’s definitely a bit bigger than I am that’s for sure.

Who can make a better Poutine you or Georges St Pierre? 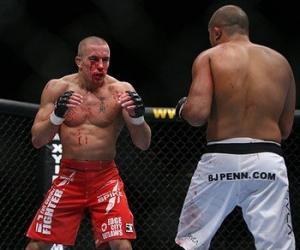 Oh George for sure, cause that’s a Quebec staple. The people here in Ontario are years behind the level of Quebec when it comes to making poutine.

I would say more of a leafs fan than a Canadiens fan but I’ve always liked the Calgary flames the most.

Now you’re on skates, who would win in a hockey fight, you or ex

In a hockey fight, I have to be honest; I think he’d whoop my ass! But growing up he was one of my favourite players to watch.

There is a video going around the internet of Canada’s newly elected Prime Minister, Mr Justin Trudeau, winning a charity boxing match. Have you seen the video, and if so what were your thoughts on the fight?

I think first off, he should stick to politics! But it was pretty cool of him to step up and do an event like that. It was a pretty ballsy move and anyone who’s willing to step into the ring has my respect.