The main event and only top quality fight on this weekend’s Fox card see former champion Lyoto Machida face former Olympian, Yoel Romero. The matchup certainly does get the juices flowing. Both fighters are right there at the top of the division. But what is evident is that both guys are in desperate need of this win.

Fighting is a young man’s game, or so they say, and these two elite fighters are certainly not young men in fighters years. This coupled with the division’s number one and two challengers already being set. Rockhold & Jacare, means they need to a super impressive win to get back into contention.

Machida comes into this fight on the back of a terrible outing against Luke Rockhold in which is he was dominated and finished in the second round. The first time ever Machida has been completely dominated inside the Octagon. Taking into account he has lost a total of six times in his career. The Rampage, Phil Davis and Chris Weidman fights were all close losses. I would argue he was doing fine against Jon Jones and Shogun before he was caught and subsequently finished. And all these fights, bar the loss to Weidman, were up a weight class.

This fight with Romero presents another chance for Machida to storm to the front of the division and become a contender again. However, losing two in a row and three out of his last four fights. Would surely curtail any future hopes Machida has for the middleweight strap. Added to this is the fact Lyoto is 37 years old, so unless he is another Couture/Henderson, he does not have many years left to achieve his dreams.

Romero The Soldier of God

Romero has been out of action since September last year. And has pulled out a fight with Jacare Souza on two different occasions. And is in danger of being forgotten at the top of the division. Romero is a physical specimen of a human being, he looks like a superhero character. And his credentials are insane. Back this up with a 9-1 record and his five-fight win streak and the man has to be taken seriously.

However, Romero is 38, and if he wants to make his move for the middleweight strap. He has to go through one of the trickiest fighters out there in Machida. This is the first time Romero will be getting into the ring with a former champion on the level of Machida. He previously faced Rafael Cavalcante in Strikeforce and suffered his only professional loss by TKO. However, a win over Machida would propel Yoel right into the title mix. And give him the credentials needed at middleweight to challenge either Weidman or Rockhold for the strap.

Romero is an Olympic silver medallist in freestyle wrestling and is somewhat of a freak athlete. With eight out of nine of his career wins have come from KO or TKO. A sure sign that while Romero has an incredible wrestling base he has become a legit striker with incredible power.

Problems for Romero occur when he faces someone who is a master in movement and striking. And unluckily for him, that just so happens to be Machida. The karate black belt has all the tools to keep the range in this fight. And pick apart Romero while avoiding the power. 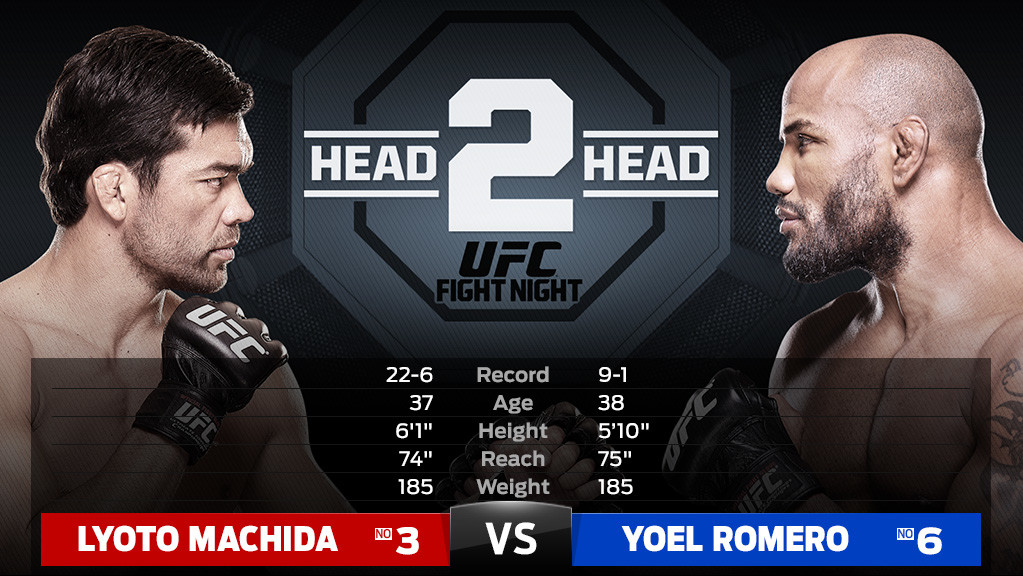 The x-factor in this fight comes down to three things, first is Romero`s wrestling. Will, he finally unleashes it to a significant level and not only this but how will he employ it against Machida. Who has a list of some of the best wrestlers in MMA, Dan Henderson, Tito Ortiz, Randy Couture, Ryan Bader, Rashad Evans, in his win column.

Secondly, how will Romero cope with a five-round fight? The wrestler has never gone five rounds and his high-pressure style could leave him drained and empty facing the championship rounds. This compared to Machida who`s last five fights have all been five rounder’s leaves a big advantage in the corner of Machida.

Third and the biggest thing for me is how is Lyoto Machida physically. He previously shrugged off takedown attempts with ease. But against Rockhold, he was mauled on the ground and gave up no resistance. How much will this have an effect on the former champion? Will we see a Machida similar to that of the one who fought Rampage after his Shogun loss, timid and very wary until the third round when it was too late? Hopefully not but the questions need to be answered.

Machida and Romero are held in high regard but add a couple of losses onto the end of the records and that regards start to slip. Both need this win as badly as any in their careers so I expect to see fireworks Saturday night.

Images courtesy of www.furysfightpicks.com and foxsports.com