At Bellator 166, veteran fighter LC Davis steps back into the cage to take on former champion Marcos Galvao. Currently 3-1 in the promotion, a win over Galvao could possibly edge Davis closer to a Bantamweight title shot. However, Davis’ future hasn’t always looked so bright and it’s been a very long and hard road up to this point, a road filled with peaks and valleys. Davis made an excellent start to his career, winning his first nine fights before losing his undefeated record to Wagnney Fabiano in December 2007. Davis rebounded though, winning seven of his next eight, including three straight victories in the WEC promotion.

As is so often the case in a sport so unforgiving though, Davis’ would soon hit a rough patch of form. At WEC 49 Davis’ win streak would come to a halt as he was submitted by Josh Grispi and he’d fail to rebound immediately too, as he lost a decision to Raphael Assuncao at the penultimate WEC event. With the UFC WEC merger oncoming, Davis was released due to his sudden losing streak and found himself both injured and without a home promotion. After fifteen months off Davis returned, fighting the undefeated Christian Uflacker on the regional circuit. Once again Davis would be on the wrong side of the decision. After winning 16 of his first 18 fights Davis was now riding a three fight slump.

Davis was under no illusions though and knew that things had to change, “It was tough to go through that! Losing, getting released, suffering a knee injury and having my son all during that time”, Davis admitted. “It was kind of a wakeup call though, I knew that I needed to make changes and evolve with the sport in order to stay relevant”. And so three months later Davis made his Bantamweight debut in his hometown of Kansas City. Thankfully, it would be a successful division debut as Davis scored a second round finish for his first win in over two years. The rejuvenated Davis would begin to string the wins together too, winning three straight all within four months of 2013.

The new win streak positioned Davis perfectly for a spot in the UFC Bantamweight division and it looked likely that Davis would be offered a contract sooner rather than later, provided he beat Ryan Roberts. Unfortunately though that wouldn’t be the case as Davis lost a five round split decision in a result that Davis still refutes to this day, “I really didn’t lose that fight with Roberts in my opinion. He also came in 5lbs overweight and has never weighed in at 135lbs (the fight’s scheduled weight) in his whole career. I fought a big Featherweight in his hometown so it was a lose lose for me but watch the fight, I feel I won to this day”. Though Davis doesn’t agree with the result, he doesn’t dwell on it, simply stating “everything happens for a reason I guess”.

He’d be right too as even though he’d officially lost, Davis’ performance earned him an unaired bout on a Bellator undercard. Davis would make the most of the opportunity too, finishing the fight with a first round guillotine. The impressive debut victory landed Davis a spot on the main card of Bellator 124 and once again he would win, this time outpointing Zeilton Rodrigues. In hindsight, Bellator was and has been a great home for Davis, “I have fought in almost every major organization out there and Bellator is second to none! I love the direction they are headed and the whole staff is amazing. I’m honoured to be under contract with them,” Davis said.

Nonetheless, Davis was now 2-0 inside the Bellator cage and was next matched with beloved Japanese fighter Hideo Tokoro, who was making his promotional debut. Though Tokoro’s record heading into the Davis fight was 32-27-2, he was a revered and respected fighter due to his wild style and his undeniable experience. Though on paper it looked a fun fight, few could have expected that we’d see the excitement we eventually would on fight night. In one of the absolute best fights of 2015, Davis and Tokoro would go back and forth on the feet and the ground, with both men almost landing a finish on multiple occasions. It was fifteen minutes of pure drama and action, a truly great fight that perfectly encapsulated what makes MMA so special. In the end, Davis would come out the close decision winner and he’d certainly earned it. 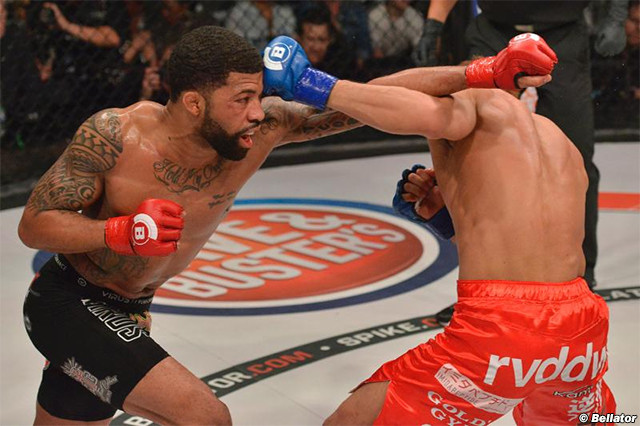 With his teeth literally smashed and shattered, Davis still opted to do his post-fight interview with Jimmy Smith and rightly so, it was his moment after all. For Davis the heart shown was nothing new, “yes that showed who I am as a fighter but the fight with Roberts did as well. The Rafael Dias and Bao Quach fights show my fighting spirit as well”. Whilst it wasn’t the first time Davis had to dig extra deep, his own spirit coupled with Tokoro’s created magic that will likely never be forgotten. With momentum on his side Davis now looked to be close to a shot at the Bellator Bantamweight title until unfortunately, he would fall at one of the final hurdles as he lost a decision to former champion Joe Warren.

“I don’t like to make excuses but mentally I wasn’t there that night. I suffered what I thought was a small knee injury five weeks prior to the fight, it hindered my training which hindered my mental game. I later found out after the fight that what I thought was a small knee injury was a completely torn ACL and MCL so I was actually proud of the mental toughness I showed to compete with him or any man like that”. That knee injury has kept Davis out of action since too, with him not fighting since the September 2015 Warren bout. After going through ACL reconstruction, rehab and just generally getting back to being himself, Davis is now ready to go and has the opportunity to remind the world of his skills in this upcoming bout with Galvao. Though he’s obviously confident, Davis is aware of how strong of an opponent Galvao is.

“He is a former world champion, I respect him and he is the type of guy I need to beat in order to put myself into title contention. With that being said I love the matchup and I plan to completely dominate him.” If Davis indeed does as he plans, he’ll find himself as one of Bellator’s top contenders at 135lbs and at the age of 36, Davis knows that time is somewhat running out. “Father Time is undefeated but my body feels good, my skills and timing are still sharp. I have three fights left on my contract and I plan to get that belt in that time frame and then ride off into the sunset.” Time will tell whether or not Davis can complete his career so idealistically but either way it’s fair to say that the ten year pro has been an admirable fighter throughout his career, showing heart and resilience on more than one occasion in and out of the cage. If the title belt is the end goal though, Davis’ journey must start with a win at Bellator 166 against Marcos Galvao.

Big thank you to LC Davis for all the insight and for more please go to @joehulbert5 on Twitter.

Images courtesy of MMAMania.com and MMAFighting.com