Kyoji Horiguchi is a Name Some Fans May Not Even Know

The name Kyoji Horiguchi may not spring to mind when thinking of UFC champions, in fact, it may be a name some fans have never even heard of. But that all might change come April 25th. Not the most high profile fighter to compete for a world championship. Horiguchi takes on current UFC flyweight champion Demetrius “Mighty Mouse” Johnson at UFC 186, at the Bell Centre in Montreal, Canada.

At just 24 years old, Horiguchi has been competing in professional MMA for five years, amassing a record of 15-1. In 2008 immediately upon graduating school. And at just 18 years of age, he began training full time in MMA, starting out as a training partner for Japanese star Nuriumi Yamamoto.

He now trains under Yamamoto at his famous “Krazy Bee” gym in Japan. He won the Shooto rookie tournament in 2010 after only two professional fights. And went on to be crowned the Shooto Bantamweight Champion in 2013. 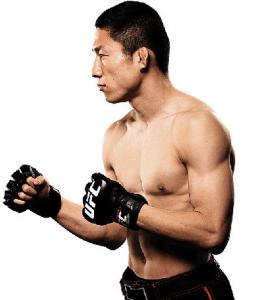 Horiguchi’s fighting style is heavily based on his Karate background. Studying karate from the age of 5 he becomes a regional champion. Entering the UFC in 2013 he had a professional record of 11-1. With his only loss coming to Shooto Featherweight Champion Masakatsu Ueda.

Starting off his UFC career at Bantamweight in October 2013. He won his first fight against Dustin Pague via TKO in the second round.

Dropping a weight class and making his flyweight debut, he won his second fight taking a unanimous decision from Darrell Montague. In his third outing, he scored a quick TKO victory. Finishing Jon Delos Reyes with punches in the very first round.

Taking his biggest win to date at UFC 182, he outpointed Louis Gaudinot for a unanimous decision and his fourth consecutive win in the UFC, bringing his total unbeaten fight streak to nine. 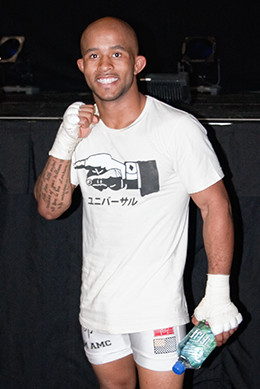 Though many feel like current champion Mightymouse has already cleared out his division with victories over top contenders. Like McCall, Benevidez, Moraga and Bagautinov. He can’t afford to sleep on somebody like Horiguchi.

We all remember the night that Matt Serra upset the king of the welterweight division GSP, and as we all know, in this game anything can happen.

The keyboard warriors may complain and find it easy to overlook someone like Kyoji Horiguchi. Unheard of, unheralded, they may easily label him as not real competition for the champion. Especially facing such a dominant champion as johnson.