It was a good night for the Irish at KSW 40 but Parke versus Gamrot almost sparked a mass brawl.

Heading into the most anticipated bout of what was a fantastic nights entertainment, Ireland were 3-0 against their Polish counterparts. The event was happening on Irish soil in Dublin’s 3 Arena but judging by the atmosphere you could have sworn you were in Warsaw.

The Polish had taken over. Norman Parke was met with a hostile reception as he made his walk to the cage. His opponent, Mateusz Gamrot was welcomed like he was the hometown hero. 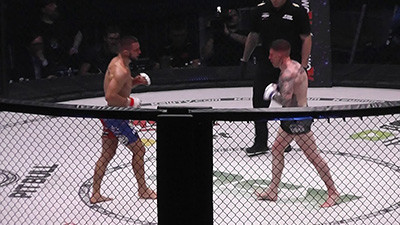 Parke was up for this. He was more fired up for this than we’d ever seen the Bushmill’s man. There was bad blood between these two from their first encounter and both men were hell-bent on setting the record straight.

Unfortunately, we are none the wiser to whom the better man is. But that’s not to say it wasn’t interesting. The fight was a barn burner while it lasted, and not just while it lasted.

Gamrot vs Parke Waved Off

What followed Marc Goddard’s waving off of the fight due to two eye pokes from Gamrot almost sparked a full-scale riot. Security was called into the cage and into the stands. Nobody knew were to l00k but it was clear that things were getting ugly.

It was a shame the fight came to the conclusion it did midway through round two. It had been a great back and forth stand-up war to that point. But two eye pokes from the Pole had left Parke’s eye visibly damaged and a no contest was declared.

Round one was a tough one to call. Both men were swinging for the fences like it was the last ten seconds of the fight. Gamrot seemed to be landing the cleaner shots but he did land two that weren’t so clean, one to the groin and the first of them two eye pokes. 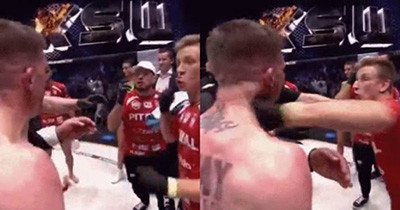 The crowd reacted to that fantastic opening round and the decibels inside the arena were raised a level in anticipation for the second. So it didn’t come as a surprise when the fight was waved off that the crowd didn’t react too favourably.

Trouble broke out in the crowd and extra security had to be called to sort it out. As that was going on a mini-melee was transpiring in the cage. That escalated when Gamrot’s corner man decided to punch Norman Parke on the chin.

Not the classiest of moves from the young man but the Polish crowd seemed to enjoy it. Parke had to be escorted backstage and things eventually settled down again. It’s hard to know if Parke and Gamrot have seen the last of one and other but it feels like there’s still some unfinished business.

Three out of Three KSW 40

Earlier in the night, the Irish had won three out of three against the Polish. Paul Lawrence nicked a very close split decision against Konrad Iwanowski. Paul Redmond was also awarded a split decision, although his seemed a clearer cut victory against Lukasz Chlewicki.

Ireland’s most impressive performance came from the returning SBG fighter Chris Fields. The middleweight had been out of action since February 2016 but didn’t show a hint of ring rust on his return. He dominated Michal Fijalka in what was very much a grappling match, threatening with various submissions throughout.

The KSW woman’s flyweight title was on the line as champion Ariane Lipski made her first defense against fellow Brazilian Mariana Morias. Lipski is a real star in the making and has a lot of hype around her. She fuelled this even more by making easy work of Morias, submitting her with a rear naked choke in the first round. 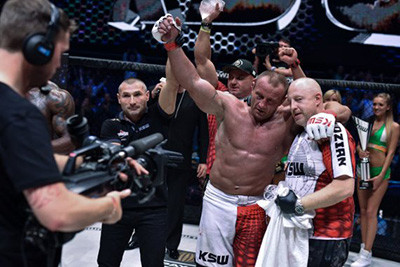 The main event of the evening seen former Worlds strongest man and Polish icon Mariusz Pudzianowski take on Jay Silva. ‘Puzian’ was spurred on by an unbelievable ovation from the crowd and came out swinging. He threw everything but the kitchen sink at Silva in the opening round.

Silva survived though but had to endure another difficult second with the big Pole dominating him from the top on the ground. Pudianowski gassed a bit for the third and allowed Silva back in the fight. Silva needed the finish but couldn’t get it and ended up losing via unanimous decision.

It was a good fight that capped of an incredible night. KSW really made a real impression on their first visit to Ireland. The fights were good but the production is in a league of its own when it comes to MMA organisations that have visited Ireland. We look forward to seeing them again.