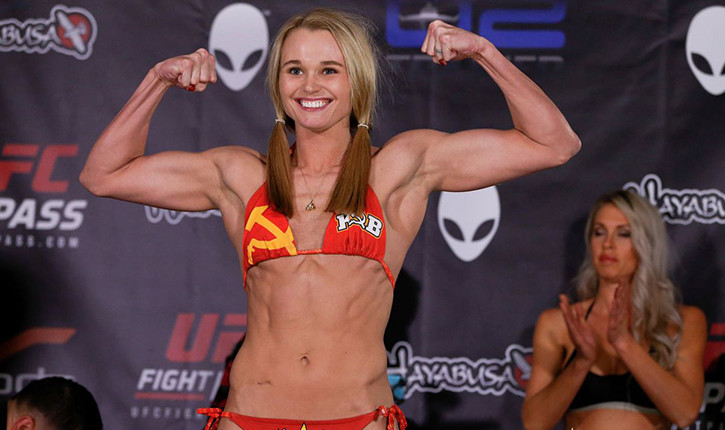 Beside myself with excitement as one of my absolute favourite fighters outside the UFC is about to get her big chance, what better time to introduce one of the most under-appreciated fighters in WMMA today?

Less than a week after her devastating victory at LFA 23 in Louisiana, Ariel Helwani reported that she’ll be fighting at UFC 216 against one of the unheralded division’s stalwarts, Brazil’s Kalindra Faria.

@arielhelwani Ariel apparently has ears in all places. The secrets out!

KGB (nicknamed so after head coach Donny Aaron decided “she looks like a Russian chick”) will be looking to join the likes of Jessica Aguilar, Karolina Kowalkiewicz and Claudia Gadelha as one of only 5 women to get a victory over the 23 fight Brazilian veteran.

So, who is Andrea Lee? And why should you care? Currently the LFA Women’s Flyweight Champion, the Texan has had an explosive 2017 so far. Having had an extremely busy year, Lee returned from an extremely harsh suspension due to a banned diuretic, in March 2016 with a bang.

4-0 in 2017 thus far, Lee knocked out veteran Jenny Liou Shriver at Invicta’s first show of the year, and followed that up by winning the LFA strap with an armbar victory over Heather Bassett just a month later. 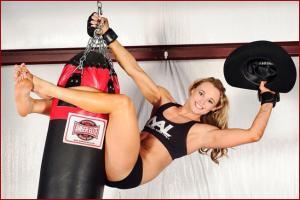 Splitting her time between LFA and Invicta, she would return to Shannon Knapp’s promotion in the summer to eke out a decision over Portland, Oregon native Liz Tracy Invicta 23.

Last week she got back into the habit of finishing fights, after Jamie Thorton finally succumbed to the KGB onslaught, and tapped to a textbook 2nd round Kimura. (A fight you can watch in full here on YouTube because LFA look after their fans).

Existing as one of the biggest names in the division, Andrea Lee confirmed to MMA Junkie (rocking her trademark Cowboy hat), prior to her win that she chose to turn down the ringer of The Ultimate Fighter, and her decision has paid dividends as she answers the call to replace the Paige Vanzant – Jessica Eye fight as the Women’s flyweight curtain raiser.

Currently ranked 4th in the division by Tapology.com, the 28 year old is an extremely well-rounded Mixed Martial Artist. Lee is a black belt in Kyokushin Karate, a Jiu Jitsu purple belt under the legendary Relson Gracie, a Judo brown belt, and a god-damn Muay Thai fiend (as you’ll see if you watch the above fight).

Training out of Karate Mafia in Shreveport Louisiana, the Texan has a strong, supportive team around her in one of the most underrated camps in all of MMA, and is well placed to make a big splash in the division in 2018 and beyond.

Put simply, Andrea Lee is without doubt one of the very elite at the weight class, and regardless of who emerges from TUF 26 with the belt, Lee will be champing at the bit to exchange her LFA title belt for a UFC one. A late starter to MMA, Lee lost a super-close decision to the very experienced Roxanne Modafferi at Invicta 10 in just her third pro fight.

With the ‘Happy Warrior’ currently blazing a trail in her 2nd spell in the Ultimate Fighter house, a rematch between Lee and the number one seed for the title would be an intriguing prospect, and Lee would undoubtedly relish an opportunity to right that wrong on the biggest stage of all.