This weekend Keith McCabe is back inside the cage after what seems like an unusually long time away from competition for one of Ireland’s most active amateur fighters. Facing off against Alex Masuku at UXC Fight Night, McCabe is looking to get back into the swing of things, before turning pro in the not too distant future.

We spoke with the fighter from Team Balance about the impending fight, plus a whole lot more…

Fight week, what have you been up to in the gym?

Normally the week coming up to the fight we just do a cardio week, so we do a lot of pads and stuff. We normally have our last session… last sparring. So I did a good pads session this morning and tonight on to another cardio session with some light rounds, about 10 light rounds of kickboxing. Then tomorrow, I’ll take tomorrow off and start doing my weight cut.

All the preparation is done so you’re ready to go?

All the preparation is done, took no shortcuts. I know it’s a long time but not a long time for myself you know, four months off fighting has done me well. And just took some time to train, I’m fresh and ready for this, injury-free too so… hope it all goes well.

The so-called official amateur record online is usually wrong. How many fights have you done the last couple of years?

So this guy you are coming up against Alex Masuku Impetus MMA? What do you know about him?

I don’t know too much about him, I found one video online. He’s strong and from the video, I saw he’s got fast hands. And he seems to be aggressive on the ground as well so… As I said I’ve only seen one video, so I haven’t seen too much on him… just enough.

Because you’re fighting so regularly what kind of injuries do you typically come out with from a fight? 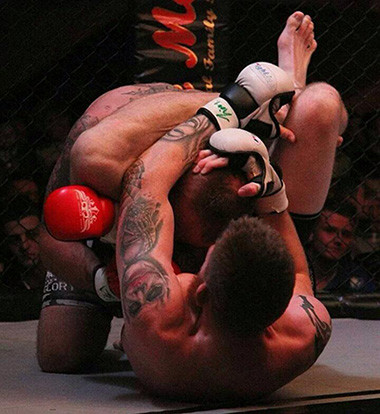 To be honest, man I’ve never really got properly injured in any fight and that’s what, 13, 14 fights and I haven’t come out with any bad injuries. A few little bumps and so on, but nothing too bad. Nothing that will stop me training.

I don’t normally take many breaks after fights cause I fight so often. But am, just a few lumps and bumps you know yourself. But I’ve been fortunate enough not to get too serious of an injury.

It seems to be a good recipe, being consistent, fighting regularly?

We’ll look over the video when I go back… go back to the drawing board with my coaches. Even the ones that win, we look back at the video with my coaches and see some of the things we can tweak and stuff. And any mistakes are made in the previous fight, I haven’t made them since.

It’s the only amateur so you might as well make your mistakes now while you can. Obviously, a win is great, but have as many fights as you can, be consistent and you can look forward towards professional then.

What is the story as regards you and turning professional, have you a timeline in mind?

I have this fight, then I have another fight three weeks later defending my own title at Akuma up the north as well. And if all goes well with those last two fights, I’m hoping that is my last two amateur fights and I look forward to pro then.

I want to try and get over to Philadelphia, Team Balance, Phil Migliarese owns my gym over in Philadelphia. I went over there last year, think I got a week and a half’s training. There’s 50 plus black belts on the mat at any one time, so the training you get over there is phenomenal.

I’d like to go over there for a month, maybe two during the summer and get some serious training in. Come back and maybe get a pro fight in September.

So the most important question of all, you’re going beard or no beard?

Haha, the beard as got a little bit of trim going, but I still have my beard. It was a bit wild there last week so I give a bit of a trim.

That’s it cushions the blows on the chin.