After barely surviving the sporting weekend that was, and still in recovery from training last week. This is Keego on the verge of tears with another instalment of ‘Keego on………’

The Master and the Student?

I don’t have a huge amount on the plate this week, or at least I didn’t until my favourite fighter/ped abuser and yours Chael P Sonnen hit twitter with a vengeance. It was like he had a few too many ‘pre-workout shakes’ (cough cough) and let his fingers do the talking. Aiming squarely at Conor McGregor. It was fantastic, hilarious but without the possibility of a payoff. And that is why there has been a minimal reply. 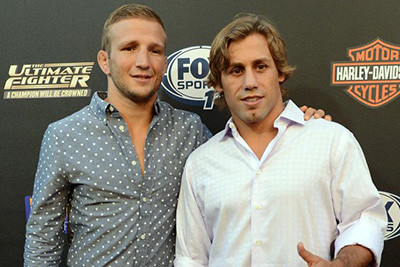 I don’t want these guys to ever fight, I want a mic and an audience and just let them talk. Last one to run out of one-liners stolen from pro wrestling wins.

In other news, a fighter who was brought into the sport, trained and became a champion with the help of his coach decides to leave his home gym to train at the gym of his former trainer who is on the outs with his home gym.

Do you get that? TJ Dillashaw took a few dollah dollah bills and moved over to Duane Ludwig (who is on the outs with Urijah Faber) gym. This sounds exactly like that time in school when the girl was with me but ended up leaving me for my friend because he had a bigger………eh………..ability to understand algebra.

This is low from Dillashaw but is fantastic after McGregor (him again) called TJ a snake in the latest series of The Ultimate Fighter. Imagine being Faber in this instance. Training Dillashaw to the world championship, bringing him along, giving him the help to be a champion and he ups and leaves. I understand training everywhere to add skills to the toolbox. That is what everyone should do, but you always come back to the home gym.

Can’t We All Just Be Friends?

This helps bring more skills at home. You should also do this with minimal fuss, minimal exposure to it. Instead of doing this like an adult, it comes out because these lads can’t live off twitter. They can’t live without the exposure on the interweb. It is very unfortunate. TJ is pulling the ‘but we are friends, why won’t you let me train at the gym’ card, which is typical 14-year-old girl stuff.

Maybe the word girl should be taken out of my previous sentence.

Is a Faber v Dillashaw fight on the horizon? I think this would be a great fight WITHOUT a championship on the line. The story would be the gym nonsense instead of the title. In reality, age is too much of a factor in the fight that barring a miracle, Faber loses. Dillashaw fights Cruz, and that is far from a walkover. If he loses, then the Faber fight is the way to go with the winner getting a shot at the title (Dillashaw).

Outside of that, I am still in mourning for my soul that was lost at training last week. I was hit more times in 90 minutes that in the last decade. Maybe too little caffeine with too little sleep, but even the heavy bag was hitting me on the chin.

That is the snapping of my synapses for this week.