Here we go! The words of Bruce Buffer will echo around every fight fans television this weekend. This is the biggest weekend in MMA history (until the next biggest weekend ever). This weekend we will see Conor McGregor take his place atop the UFC, or…………well let’s not think about that.

Just like every other MMA blogger this week, I will give you my thoughts on the fight. Some may make sense, some may not but they won’t be too technical. I don’t pretend to know the ins and outs of strategy. So this may be at a playschool level for some of you.

The closer we get to the fight the more worried I get. If we could have had this happen the night after the UFC press conference in Dublin I think Conor would have gotten the job done in minutes. The Irish crowd had Aldo rattled, the fact that he couldn’t control any part of what was happening had gotten to him and he was ripe for the pickings.

The longer we get away from that the more worried I get. The vast amount of Aldo best of videos on YouTube don’t help either. He is an absolute monster with a leg kick that is like an axe chopping down a Christmas tree (seasonal reference). Aldo has power, no more than Chad Mendes but he has power that can’t be taken lightly. I know Conor walked through the best that Mendes threw, but he can’t do that every time. In years past, he was so hard to hit it was like he was living in the matrix.

During the last few fights, Conor has been walking straight into shots knowing that the granite chin will stay strong. There are only so many times that the granite stays intact when someone is swinging a hammer at it. Watching the clips of the movement training he is doing, it appears that the plan is to be abusive and elusive. Good choice.

How Has This Affected Jose Aldo Junior? 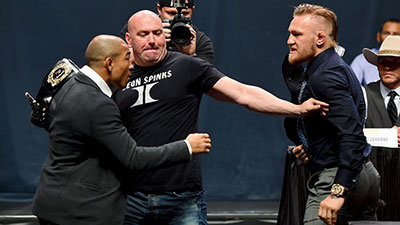 As for Aldo. How have all the shenanigans affected him? No one has gotten in his head like McGregor. Every waking moment and some of his sleeping ones are being taken with the King of Dublin. Every piece of disrespect will have an effect.

Will he fight on anger? Or will he be able to control himself and execute a game plan. Which will probably revolve around leg kicks and right hands. Aldo would be best served to try and take Conor down. He has an ace Jiu-jitsu game and would negate the left hand from Crumlin.

It’s just too hard to call. My heart and 85% of my head say McGregor, but it is just like Tiger Woods before the aul riding, no one ever bet against him. And with good reason. He had demolished the field, no one could handle being near him in the final round of a major. Just like Tyson and Foreman before him. Aldo is in that company. He has demolished the division.

As we stand now, there is a huge gap between what he has accomplished and the rest. But has Conor gotten into his head, has the notorious one been able to plant a seed of doubt? Will that doubt leaves the chin open for the left hook?

It’s just too close to call…..