Josh Barnett returns to the UFC this weekend for the first time since 2013 to face Roy Nelson at UFC Fight Night 75. After a previous hiatus of some 12 years, it is the promotions third time holding an event since 2012 in what was once the hotbed of mixed martial arts.

Barnett, of course, is no stranger to the island nation and spent many years competing there against the very best the sport had to offer. His career path changed abruptly when in 2002, after beating Randy Couture to become the youngest fighter to ever win the UFC heavyweight championship.

The Baby Faced Assassin then had the title summarily stripped following a failed drugs test. Soon after Barnett left the UFC and signed to fight in Japan. It was to be the beginning of a prolonged period competing outside the US, that would go on to define the career of the American catch wrestler.

His return to the Saitama super arena this weekend has all the hallmarks of a homecoming for the Japanese crowd favourite. With many of his battles having been forged in Pride fighting Championships and Pancrase against some of the sports legends.

It’s probably not too big a statement to make that Barnett himself is seen as a legend in his own right amongst many. Not alone for his fighting ability, but also his unique character which has won him countless fans down through the years.

Finding himself amongst a very rare and lofty group of names including the likes of Frank Shamrock, Ken Shamrock and Bas Rutten. He is one of an elite few who have held both a Pancrase and UFC title.

There is no doubt that his time away from the spotlight that is the Ultimate Fighting Championships. Somewhat diminished his standing amongst the casual fan who knows nothing other than the UFC.

But with his recent return to favour and some exciting fights inside the octagon. Josh Barnett has begun to re-establish himself as a threat in the heavyweight division. 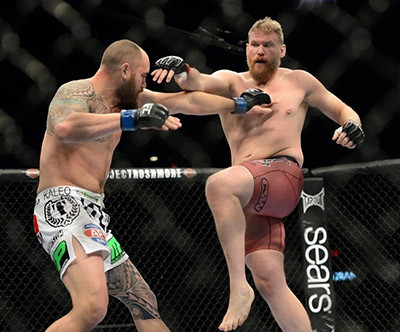 With one win over perennial top contender and fellow veteran Frank Mir and a subsequent loss to Travis Browne, both in 2013. It will be Barnett’s first time competing inside the Octagon in almost 2 years.

Outside of mixed martial arts, the Warmaster has been keeping busy. In 2014 winning the inaugural Metamoris 4 Heavyweight title against multiple title holder and submission specialist Dean Lister.

Lister had never before lost via submission and outside of MMA, it was a win which earned Barnett huge kudos in the world’s grappling community.

In 2015 Barnett would once again taste success when he defeated Ryron Gracie in the main event at Metamoris 6. His second win outside of the cage in two years.

With both UFC Fight Night 75 main event fighters being well known for their ground game. Nelson has yet to win via submission since joining the UFC. Choosing instead to use his devastating right hand to finish the majority of his fights.

So how things will play out when these two veterans meet each other in the Saitama Super arena is indeed an exciting prospect which could go any number of ways.

With both fighters traditionally being as happy to stay on their feet and trade leather as they are to take things to the ground. It’s a heavyweight matchup truly worthy of the iconic Japanese venue.