Joseph Duffy in the Biggest Fight of His Career to Date

Just seven months ago Joseph Duffy was a former highly successful MMA fighter. Making his way back on to the scene following a stint in professional boxing, where he amassed an undefeated record of 7 – 0. Today “Irish Joe” finds himself on the cusp of what is no doubt the biggest fight of his career, as he looks to introduce himself to a global audience when he makes his debut at UFC 185 this weekend in Dallas.

With two fights and two wins since his return to action under the Cage Warriors promotion. Coming off of one of the most devastating and clinical finishes of 2015 over Frenchman Julien Boussuge. The man from Donegal via Burtonport was quickly snapped up by the UFC. And with the waters now being somewhat muddied in relation to the future of the Cage Warriors promotion. Duffy couldn’t have picked a better time to take the next step up in his career.

His upcoming fight against Jake Lindsey in Dallas at UFC 185 offers the Irishman the perfect opportunity to enter the psyche of the casual UFC fan and become an established force in the lightweight division. Should Duffy announce his arrival with the same venom and finishing prowess for which he has become known? Those unfamiliar’s are sure to soon become fans. 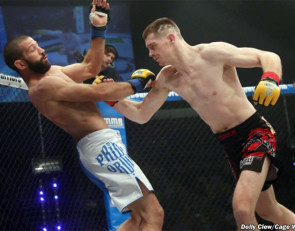 As a fan and long time follower of the sport, you could not ask for a better ambassador. Outside of the cage, Joseph Duffy is a very nice guy, cool and calm with a humble demeanour.

But once inside the cage, he is a highly skilled hunter who stalks, then walks down his prey. And should he continue on his current trajectory, there is no doubt that his pressure style of fighting will endear him to the fans and UFC brass.

With a move of gyms from the UK to the famed Tristar Gym in Montreal, Quebec Canada. What effect will training alongside such names such as Rory MacDonald, David Loiseau and Georges St Pierre have on his style? Under the ever-watchful eye of head coach Firas Zahabi and his team. How will Duffy’s game evolve?

Tristar has been a breeding ground for some of the sports biggest stars. With his own unique set of skills, what will the addition of Duffy to the team bring? And will the newly formed partnership bear fruit on its first outing?

What changes or improvements might we see? It’s anyone’s guess as to what, if anything Duffy might change as he looks to continue his winning ways as a UFC fighter. There’s no doubting the level of competition in the UFC’s ranks is the very best the world has to offer. And for competitors like Joseph Duffy, it’s that type of challenge which drives them forward.

Will the Irish invasion continue at pace, with Duffy taking the helm at least for this weekend at UFC 185? All eyes will be on the pride of Donegal and Burtonport as he looks to make it yet another win in his growing tally.

For his supporters, there is no doubting Duffy has what it takes to go right to the top. Now that he finds himself within the hallowed fences of the UFC’s octagon and facing a whole new line up of adversaries. This is his chance to prove it.