On Saturday night ‘Irish’ Joseph Duffy will enter the octagon for the second time to face Brazilian Ivan Jorge. As the UFC makes its much-anticipated debut on Scottish soil.

Despite being only a one fight novice with the world’s leading mixed martial arts organization, the Donegal man finds himself high enough up the fight card. By the time Duffy makes the walk to the octagon, Paddy Holahan will have already contested a bout with Vaughan Lee. The two between them having ten fight experience with the promotion. This is rare and a testament to just how high the UFC rate the Irishman, and rightly so.

Since returning from a three-year hiatus from mixed martial arts, to pursue a career in professional boxing. Joe has been on a fast track to the top of the business. It was after an unfortunate loss to Ivan Musardo for the Cage Warriors Lightweight title in 2011. A fight in which Joe sustained a broken hand, he decided to turn his attention to the pro boxing game. But despite going undefeated and amassing seven victories. Duffy decided that he belonged in mixed martial arts, and thankfully made his return.

Fittingly Dublin was the venue for Joe’s return, where he faced Damien Lapilus at Cage Warriors 70. Duffy finished the fight in the third round via rare naked choke, increasing his reputation as a bit of a submission artist. The Donegal man was only one more fight away from a deal with the UFC and that fight was short-lived. Joe caught his opponent Julian Boussage with a devastating knee that left him out cold in the very first minute of the very first round.

Joseph Duffy Is The Last Man To Beat Conor McGregor

The Irish man was making a name for himself across the globe. As well as being helped along with the repeated fact that he was the last man to beat rising superstar Conor McGregor. The timing couldn’t be any better for Joe to make his UFC debut. And after signing a contract with the promotion on January 2015. Duffy was soon scheduled to face Brazilian Vagner Rocha on March 14 at UFC 185. Rocha however, had to pull from the bout due to injury but was replaced by American Jake Lindsey.

Joe made the switch to the famous Tristar gym in Montreal Canada to train for his fight with Lindsey. Tristar is the home of many world-class martial artists including legend Georges St Pierre and UFC welterweight contender Rory MacDonald. The head coach in the gym is the famous Firas Zahabi who has been described by many, including Joe Rogan, as one of the best MMA coaches in the world. 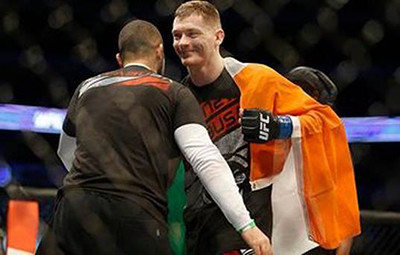 Having Firas Zahabi train and be in the corner of Duffy is a huge bonus for the Donegal man. However, the corner wasn’t needed in his UFC debut as Duffy ran straight through Lyndsey, finishing him in spectacular fashion in the first round.

Joe showed great composure, controlled the centre of the octagon, unleashed strikes at will before catching his opponent with a devastating left kick to the head that rocked Lyndsey, and Joe finished the job nicely with a two punch combination to the body.

You can look at the evolution of Rory MacDonald since his debut in 2010 to see just how influential Zahabi can be. Duffy isn’t too dissimilar to MacDonald in that both men carry themselves very well outside of the octagon. Both men are very cool, humble and soft-spoken, a real credit to the sport. But close that cage door and they are a pair of ruthless warriors.

It’s been four months since his UFC debut and in this time training at Tristar, we shouldn’t be surprised to see a further improvement in Joe’s skills. No opponent should be taken lightly in the UFC and Ivan Jorge could potentially cause some serious problems being a Black belt in Brazilian Jiu-Jitsu. But Duffy has shown his professional approach before and will be a firm favourite going into the bout. 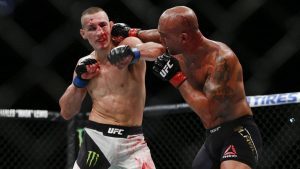 Should Duffy get through this test in impressive fashion, fans and pundits alike will be immediately talking about who’s next and when? The UFC is, of course, making its return to Dublin in October, a card every Irish fighter will want to be on. The 155lbs division is as stacked a division there is. And there will be no shortage of potential opponents should Joe be scheduled for that event.

Duffy off course has spoken of potentially making the move down to 145lbs. The division off course now ruled by our very own Notorious Conor McGregor. Like Conor, Joe would have a massive size advantage over most opponents in this division. And should he be able to manage the weight cut without any trouble, would be a serious contender in that division.

Whether his future lies at lightweight or featherweight will remain to be seen. There’s no denying that whatever division Joseph Duffy decides to settle in. He has all the attributes, both mentally and physically to succeed. For now, though his focus will be on Ivan Jorge in Glasgow on Saturday night. For the rest of us though we can look forward to what should be a very bright future. A satisfying year rounded off on home soil and an exciting 2016 in prospect, for Irish mixed martial arts, and Joeseph Duffy in particular.