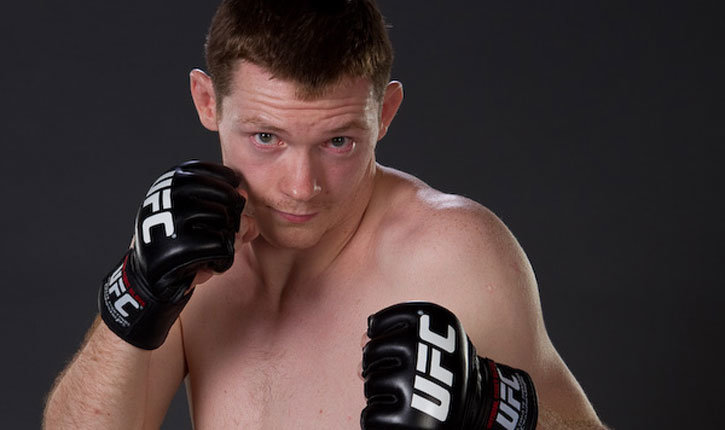 In 2011, Joseph Duffy was a mixed martial artist on a roll. After amassing some 10 straight professional career wins in a row. The man from Donegal looked to have all the hallmarks of a future star in the sport. With professional wins over both Conor McGregor and Norman Parke only the second time he has ever been beaten. The future looked very bright indeed. So what happened, why did Duffy decide to step away from a sport in which he excelled?

“I moved up to London because I was training out of Wales at the time. So I moved up to London started training and the plan was I was gonna have a few fights back and then I was going to move to America to Jacksons. Maybe have a little look at Tristar, one of the top camps, so that was the plan.

But when I was up there I started working my hands with John Tandy the boxing coach up here and it just kinda went from there really. He said, “have you ever thought about giving pro boxing a go?” And I though, bugger it. I got nothing to lose so I gave it a go and it snowballed from there really.”

How has the boxing career been going for you?

“It was good, it was good. Am the fight, I got to 7 – 0. But I had alot of trouble throughout the fights with my hands. Not so much at the start, the first few at the start it was ok. But towards the end, you know four fights. I was pretty much boxing one handed from the first round on really.”

Is boxing something you might go back to, is it close to your heart or is it back to mma now an that’s it?

“Now that was the deciding factor really. Mma was always the one that was close to my heart. And as much as I enjoyed the boxing at the time, but I didn’t have to passion for it like I do mma. And I felt when you go up the levels and you’re fighting these boys who’ve been doing it since they were kids. This is their passion, I thought I’m gonna come unstuck. They’re just gonna want it more than I do. So I thought maybe it’s time to make the move, well before it’s too late really.”

So you’re a blackbelt in Jiu Jitsu. Which came first, did you start boxing first or how did it happen?

“I never boxed in my life to tell you the truth, until I moved to London. I started in all Martial Arts really. I started in Taekwondo, semi contact kickboxing and then into full contact kickboxing and then I started learning Jiu Jitsu. And then I just ended up in mma, it all just kinda blended together. It was just something that happened rather than something that was planned. And obviously with the boxing, I never learned to box. So it was a good opportunity to give it a crack and the worst comes to worst, come back with decent hands.”

With the Irish fighters doing well, which have comes through Cage Warriors and then moved on to UFC. Is that something you’re also looking to do?

“Yeah of course, that was always my ambition. I always wanted to be in the UFC and I always wanted to be fighting at the top level. Looking towards the titles. I feel any sport that you’re in you need to be looking at working toward the top or it’s just a hobby. But for me it’s about more than that. It’s my passion and that’s where I aspire to be I suppose.”

You’re known by many as the guy who beat Norman Parke and Conor McGregor. Do you feel that that association has aided your career or is it more of a pain in the backside having it brought up all the time?

“Am, I don’t know. I suppose I won’t know until I start back fighting, obviously if I go back with a good performance straight away. People have heard of me because they look at Norman Parke and they look at Conor’s record and they see my name on there.

So that’s good in terms of if you’re on the route to getting into the UFC. With them two names on your record they look at you as legit straight away. But at the same time, that’s not what… I don’t want to be known as the person who just beat these guys. Obviously I got my own aspirations and I want to work hard and be doing what them boys are doing myself.”

After fighting these two guys, do you think either of them got what it takes to get to the top?

“I do yeah, yeah definitely. Like, Conor taking out a top level guy in one round, it’s impressive, it’s an impressive performance. Especially with all the pressure and everything, I definitely see him at the top level. You know I think he’s just got that belief and it shows. To be able to go through these guys in the top level, the same way he was in Cage Warriors. You gotta stand up and take note really at how well he’s doing.”

Presuming it’s not going to be another 5 years before the UFC comes back to Ireland. Would it be something you would be working towards, being that Irish guy on the next Dublin card?

“Without a doubt, it’s a dream right there really. It’s a massive honour to be headlining a Cage Warriors card in Dublin. But if you are on a UFC card aswell. That’s what all Irish fighters are aspiring to do aswell, get on Irish UFC. Even better, we could get a title fight in Ireland. An Irish guy fighting for a title in Ireland, that would be as good as it gets I suppose.”

You’re still only 26, with a (10 – 1) record. Surely it must give you an amazing amount of confidence, knowing you have the skills. How do you feel going forward into this next Cage Warriors card?

“It’s great! Before, you know I always trusted my standup and I trusted the rest of my game. And I feel like since I’ve been in London I feel I’ve improved alot of the areas I felt weaker at. And obviously with the boxing I feel like my standup has gone to another level again. So I’m confident and I’m looking forward to it and the main thing I’m just looking to enjoy myself. You know, I’m looking to show people what I can do and get back to enjoying the fight and enjoying what I love best really, back in the cage.”

Are you a believer in ring rust. If so, do you feel you’ll have any on the night?

“You know, I think it’s all in the head. You can look into it too much and obviously then it will hinder you. But I think as long as you trust yourself and you give everything a 100%. I think, you wouldn’t know any difference is the truth.
I think after the mma, it was over a year before I had my first pro boxing bout and I didn’t show no ring rust then. I’ve been out for over a year now from boxing, so I’m not too worried.”

What about your opponent Damien Lapilus. He has a good record. Is there anything that really stands out for you as you look toward the fight?

“Not really. Again I’m trying to concentrate on my own game. I feel he’s got a talent everywhere really. He’s well rounded, so all I think is I trust my own game. Obviously belivin that I’m better and implementing it all on the night.”

So are you hanging around Dublin for a few days after the fight or are you straight back to London?

“I’m back the Sunday unfortunately. I’d like to get up home for a few days, visit the family but we’re heading on holiday the following week. So I’m gonna get back, keep my training going so I don’t get too fat for when I’m lying on the beach.”

Working on the six-pack?