He doesn’t talk much but when he fights you better pay attention when people chat about the best fighters on the planet you better believe that Jose Aldo is always in the discussion. The quiet man from Brazil has proven time and again that regardless of opponent and styles he can dominate and destroy. The Brazilian has been a near-constant member of the top three pounds for pound fighters and has very rarely failed to shine on the big stage.

Knockout power in both hands, leg kicks that are the benchmark for all UFC fighters, a black belt on the ground, coupled with the fact he has never been taken down and controlled, it is hard to see any weakness in the Champion. He is the number two pound for pound fighter on the planet, his only loss came back in 2005, a year into his pro career, Jose Aldo is a human highlight reel of destruction but yet, “McGregor will finish him in one”, claimed a fan at the UFC world tour in Dublin mid-week and he was met by a roar of approval form like-minded fans in attendance.

These people forget or simply do not know, that until his last fight against Chad Mendes, Aldo had never been hurt or in danger in any way while fighting in his UFC career, and even against Mendes, he was dropped to his ass by a hook but immediately recovered and nearly KO`d Mendes a minute later.

Aldo vs McGregor is (hopefully) going to be a barn burner but we simply do not know. Both fighters have a god-given ability to end the fight at any second. The recent world tour highlighted McGregor size advantage but in MMA size doesn’t count for much, just look at Stefan Struve who holds a height advantage over every opponent he faces.

Jose started out in 2004 and within a year was 6-0, all his wins coming via first-round stoppage. In late 2005 the 18-year-old Jose Aldo suffered his first and only MMA loss, after dominating Luciano Azevedo on the feet for the first round, Aldo was taken down and submitted late in the second. Aldo had 3 more fights before he signed with the WEC and started to slowly break into public awareness.

His next two fights were possibly his biggest yet, he took on Mike Brown for the belt and easily dispatched of him, claiming the belt that he still holds today, albeit in a different organisation. Then came the Faber fight, easily the biggest fight in WEC history, the former Champ and golden boy Urijah Faber squared off against the young Brazilian.

What ensued was a one-sided demolition with Faber being carried to his corner after a round with his leg being brutalised at every opportunity. Aldo won a 5 round lop-sided bout with Faber and firmly announced himself to the MMA world. Here is the picture of Uriah`s leg from the day after. 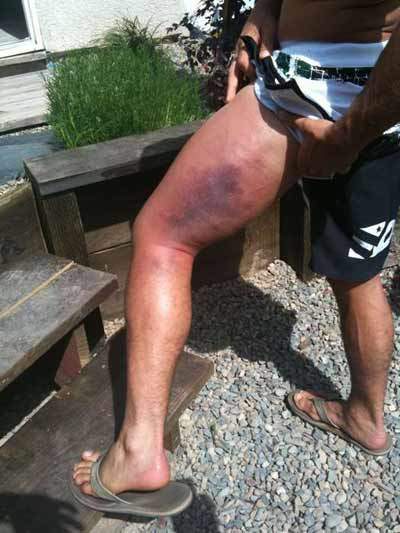 Aldo next took care of Manny Gamburyan before entering the UFC as featherweight king and defeating Mark Hominick and Kenny Florian in back to back 5 round decisions. In the past 3 years Mendes(twice), Frankie Edgar, Chan Sung Jung and Ricardo Lamas have all fallen aside in Aldo`s wake with only Edgar and Mendes seeming to test the Champion in any significant way.

I don’t pen this piece as a naysayer but more so, advising caution, Irish fans are the best in the world I have already stated at supporting one of their own, but Conor is still the underdog in this fight, and he’s facing a man who is as complete an MMA fighter as you will find today.

Jose Aldo is a humble lad from Brazil, raised by his dad, living in abject poverty, who rose from the favelas to become one of the greatest fighters on this planet. Jose Aldo is a rare, rare occurrence and his story is so unlikely that it should steal all the headlines. Add this to his exceptional fighting ability and the UFC has a superstar, right? In a perfect world, yes, but Aldo has never captured the fans imagination and truth be told has played second fiddle to Conor McGregor all through this world tour.

Conor is also a destroyer of men and has looked awesome so far in his career and as a fan of his for many years I really hope he beats Aldo and wins gold, but just because he has been the star of the World tour does not mean he has already defeated Aldo.

The verbal jousting and belt snatching is one thing but the question has to be posed are Irish fans giving Jose Aldo the credit he deserves? He has been a long time champ and conducts himself with poise and confidence. Some of the abuse hurled at Aldo during the World tour was embarrassing and way over the line. It is a different story when Conor is doing it because at the end of the day, they are opponents and Conor will step into the octagon where they will put hands on each other.

Irish fans have garnered much attention on the world scene as enthusiastic and passionate and the early thoughts seem to be that the image of Irish fans has been tarnished by some of the questions and insult thrown at Aldo.

It can be argued that the Irish fans were getting back at Aldo for the Brazilian fans continuous chants of “uh vai morrer” or “your gonna die” at McGregor, but I felt here we had a chance to rise above that and while still creating a hostile environment keep it above the belt, but some of the fan questions were sickening with Dana White refusing to let Aldo acknowledge them.

A quick note on the world tour, I do not know whether it is a good thing or bad for Conor but I have never seen Jose Aldo so pumped up and aggravated in his career. He tried to create drama with Chad Mendes but it looked fake and premeditated, this is not the case now, his reaction to Conor is something that all Conor previous opponents have in common, anger.

Jose has never shown much emotion towards another fighter and his “beef” with Mendes was a precursor to one of the fights of 2014, so as an eternal optimist I can only hope that with this drama it will lead to one of the greatest fights of all time.

The reaction to the press conference is outstanding in Ireland and while Jose Aldo might have come off worse in terms of verbal banter he can only benefit from the name recognition that has finally arrived for the Brazilian destroyer.

One example of how big this fight has become in Ireland and possibly in Brazil but that could be doubtful Conor McGregor vs Jose Aldo is bigger than Mayweather vs Pacquiao in those Countries.

The question is often posed to me, how will it go? How to answer, yes, no, maybe? Truth be told, I have no idea, he might, I seem to say more often than not. One thing that is for sure is that this fight is easily the most important fight in Irish MMA history and with two stand-up strikers at this level could easily be a candidate for fight of the year.