We go behind the scenes and inside Jose Aldo’s training camp at Nova Uniao to speak with Alex Chadud, the featherweight champions long time Muay Thai Coach. He gave us some insight into how things were going at Nova Uniao both before and after Jose’s rib injury which put an end to his title defence against Conor McGregor at UFC 189 in Las Vegas.

Alex gives us his thoughts on the injury and what effect it has had on the featherweight champions mindset. How he hopes everything will play out and his belief that Jose will meet with McGregor eventually, just not at UFC 189. Something he himself personally wants to see happen.

You are Dutch by birth, a country famous for kickboxers. Is that where your love of Muay Thai came from?

Actually I was not born in Holland, I moved there when I was almost 15 years old… I lived in Amsterdam till 2010, and yes there is where started my love for Thai boxing.

Are you usually based in Goiânia, but have been at Nova Uniao Rio now for this entire UFC 189 camp?

Yes, my gym is in Goiania and when there is a big fight I fly over to Rio to do the camps, for this camp I was flying every week to Rio and coming back to Goiania…

What was the mood like in Nova Uniao prior to Jose Aldo’s injury, how was the camp going?

The camp was going great… everything was just fine till the kick landed… the mood was not ok of course!!! Everybody was crushed!

When did you first learn of his rib injury and were you there at the time when it happened? 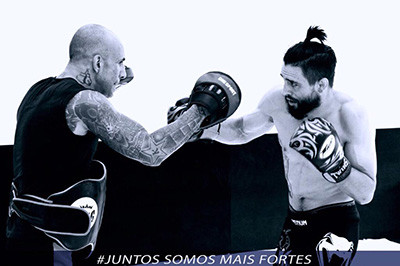 No, I was not there when it happened… I was on a plane flying to Rio… when I got there he was at the hospital already.

It’s been a real roller coaster for everyone, one minute the fight is on, the next it’s off.

Did you personally think he would be ok?

I think he did right not to fight this time… health is everything… I saw the scan and I saw the broken rib… how can he fights with an injury like that?

How is Jose dealing with the injury after being through almost a full fight camp?

He is very sad about it… but only time will comfort him… this fight will happen for sure but not on July 11th.

Will Jose be sitting cage side at UFC 189 anyway?

I am presuming he wants  McGregor to win so that he can be the one to beat him, am I right or wrong?

I really don’t know if you are right or wrong, but if you ask me what I want? I will tell you that I want that the bitchgregor wins… then we can destroy him anytime soon…

Who is Jose’s money on to win between McGregor and Mendes and why?

Who do you think will win and does André Pederneiras share the same opinion?

Sorry I have no answer for this one either.