Jorge Santos is a Brazilian native, living and plying his craft in Ireland. After achieving his black belt in his home country, he travelled to Dublin to set up his own Jiu-Jitsu school. We wanted to find out why he had moved from the home of Brazilian Jiu-Jitsu. Across the globe to a country where it is very much a niche sport. What changes has he seen since first arriving and what does he think of the sport’s progression overall.

So how long have you been in Ireland now?

Three years and a half, nearly four.

And how did you come here originally?

I came here for training, to do the class. Because when I was a brown belt, my friend lives here. Two of my friends live here. They say, “Jorge when you get your black belt you come to Ireland. Don’t have black belts here, so we can have a good opportunity to growing up“. Because in Brazil, I just one more black belt there so.

What is the scene like in Brazil now for jiu-jitsu? 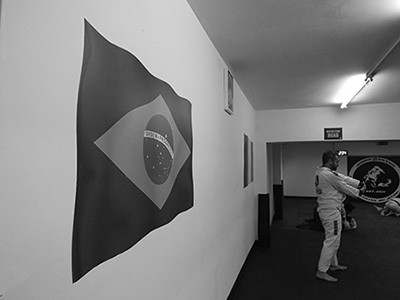 It’s strong, but we have black belts everywhere you know. It’s very common.

Do you know how many black belts we have in Ireland right now?

I think it’s around 25, including the Republic and the North.

Is there any other black belts here in your own club?

Yes here, with me 5 now. Alexandro, Alexandre, Paolo, Fabio. Yes there are five. All trained under me yes.

How long does it take to get a black belt these days?

Many guys got the belt in four years, five years you know. But this is… But guys… like under Andre Galvao, like prove you know. Go to World Champion and win many times and was black belts. But I got mine in nine years.

Do you get many Irish coming in here?

Yea, Yea many Irish in here. I hope from next month, I am going to start one student of mine, Irish. He is going to start to do the class too, going to start to coach. Because then it is good for connection. Bringing more Irish to my club. Because I know the Brazilian culture, then I can talk to Brazils. But not with Irish, the same connection. So I need to get one instructor Irish…

So how far do you feel the scene has come in Ireland in the last 3 1/2 years?

Since I come here is very small… jiu-jitsu, but start to grow up. Every month of competition. And the more competition comes to Ireland now, I think these trials, World Pro come to Ireland. This from Abu Dhabi. These very good, very professional. So going to give some money for the Brazilian jiu-jitsu.

So what do you think of competitions like Metamoris? Different grappling styles competing together. Wrestlers like Chael Sonnen competing against Galvao?

So you don’t agree with people getting belts without..

For sure no, like MMA fighters black belts. Never put feet on the mat?

People have a preference for Gi, No-Gi. A lot of the guys in MMA train No-Gi because it’s not practical for competition.

Yes, a lot of the guys in MMA train No-Gi.

But they still get their belts no?

Yes, but you hear of guys in MMA getting belts, who don’t compete with Gi?

No, no you can’t, this is not fair you know. You don’t have kimono for close, your belt is just for close.

So what separates jiu-jitsu from the other martial arts, the ethos, the culture?

Jiu-jitsu for me is the best martial art. Because, the only Martial art, forgive the opportunity for your opponent to give up. You don’t have to kill him you know. Muay Thai, Karate, you just punch punch punch. No give the opportunity for your opponent. If you do with the choke, maybe a guy going to sleep, or tap. If you get armbar, before it break guy going to tap or you break the arm… it gives an opportunity. The other martial art is no give, just punch, kick you know, hit.

I think it was Demian Maia who said he does not like to hurt his opponent..

Yes, I think I start jiu-jitsu because of that. When I was young with my brother, he tried punch me. I hold him… put on the floor, just hold and ask you know, give up, come on.

He also does Jiu-Jitsu?

No, he starts, but stop.

Who in mixed martial arts has the best and Jiu-jitsu in your opinion, Werdum?

Werdum from my city. I trained before with him from when before was Chute boxe. It depends you know, it’s very hard to say. It’s very very hard… many guys.