It’s been quite a while since we last saw ‘The Bull’ John Makdessi inside the octagon. A fixture in the UFC lightweight division since 2010, Makdessi hasn’t fought since February of this year. But that’s not how the man from Montreal wanted his 2014 to pan out.

After dealing with a longstanding issue, he has been recuperating and contemplating both life and career. With his focus firmly fixed on his return to action, potentially in January 2015. We wanted to chat with the TriStar fighter about his life in Martial Arts, the transition into MMA and what the future holds for one of the most creative strikers in the game.

A Black belt in Shotokan and Taekwondo. Having gone a straight 22 fights, 22 wins in kickboxing. Did you decide to make the move to mixed martial arts in 2006?

My first art, I started was Taekwondo and then I competed at a high level. Then my first Sensei closed down the dojo and I kinda had to figure out my own way. I always loved training, I always loved martial arts. I more or less always had someone teaching me, but at one point I had to teach myself, you know. Then I found another instructor and he was a Karate instructor, Shotokan guy and I went under him and did very well under him you know.

That’s when I wanted to go into something more full contact. I got introduced to kickboxing. At that point, I had gone through three instructors already and I wanted to continue fighting and kickboxing was very good to me. I wanted to actually pursue kickboxing professionally. But at that point in Montreal, North  America, kickboxing had kinda died out.

My Introduction To Mixed Martial Arts

That’s when I got introduced to mixed martial arts and I heard about Tristar. I started to go train there amongst many other big fighters, kind of evolved my skills. A lot of bumps on the road trying to figure out what was the best thing for me in the sense of my fighting style.

You know, I’m always trying to figure out a way to stand out from these other fighters. Sometimes regardless of what the judges think I always put on a good fight.

How would you describe the ethos at  TriStar? What kind of coach is Firas?

Firas is very smart, he’s very calculated and he does his homework. You know ever since I met Firas…. The best way I can describe Firas, he’s a philosopher. He’s always trying to evolve consistently, not only as a coach but also as a person. The thing about a lot of other coaches is they just sit on the sidelines.

He actually trains himself, he does his own stuff and he helps out fighters. I guess you get the best of both worlds. I went to a lot of trainers and it’s all about chemistry, understanding the coach and the student, know what I mean.

What’s the vibe like at TriStar at the moment. Some are saying Canadian MMA has hit a bit of a low point. Do you believe that’s true?

In my own personal situation, I don’t feel any different. It didn’t affect me personally. At TriStar, there’s always going to be fighters coming in and coming out. Me personally I find that fighters in today’s world, they are more athletic, more evolved and  I find that there’s always going to be a new wave of fighters, just like anything else in life. I haven’t felt any difference since Georges stepped to the side.

What happens when Rory meets Johny or Robbie, does he win that fight?

You’re in the UFC since 2010. What do you see when you look at the top of the lightweight division at the moment? 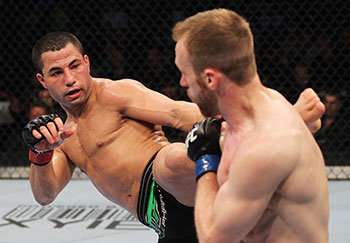 I always believed! People always ask me why don’t you cut to 145, because obviously my disadvantage in size. I mean, fighting in the UFC I realised two things. I’m fucking fighting big guys.

Secondly, I’m fighting guys that really don’t… really want to fight, know what I mean. The thing is, what’s tricky about the UFC is, being in the organisation. I can’t let things get to me. I’m the kind of person where I let things get to me. So I’m trying to find my way in the sense of I try to break all barriers, you know.

Listen, the UFC is going to match me with who they want to match me up with. Obviously, I’m trying to get exciting fights and get closer to the title, know what I mean. But I truly believe 155 is not only the toughest division but the most competitive division and the most stacked division.

There’s a big gap from 155 to 135. I mean you look at every other division and there isn’t as much, not only competitive talent in the other divisions if you want to compare it to 155 division. That being said it’s a very tough challenge for me. But I truly believe, sometimes these things take time.

I Want To Make A Statement In The UFC

My goal is I want to make a statement. I gotta change my attitude and get the attitude, no more playing a nice guy. I always respectful, but it’s a business and that’s the thing I’m starting to realise, it’s a business. I gotta go out there and fight like it’s my last day you know.

Some notable fighters have been quite vocal in their disdain for how mixed martial arts has developed differently in the west, where the rules favour wrestling and groundwork. When in comparison to the east, where promotions such as PRIDE. The rules were engineered more toward standup. Would you agree with that statement?

Yeah, of course, I mean there are many ways to look at a situation. But I truly believe that number one, the cage is obviously bigger than a ring. In a ring, it’s easier to corner the opponent. It also forces the two fighters to engage.

Instead of one guy is running away for half the round and the other guy is trying to chase the guy, it’s all about perspective. If you take down an opponent, most of the time the guy on top is stalling and the guy on the bottom is actually doing more of the work, trying a submission or trying to get up.

It’s all perspective. If you look at PRIDE, a guy who stalling gets a warning card, know what I mean. I find that if the UFC and the referees would put more pressure on the fighters to engage more. Hitting and running away type of thing and waiting for the clock to run, know what I mean, that’s my personal perspective. Don’t forget the fans, if it’s not exciting to watch…

I Trained With Many Different Coaches

And also it changes the way people train. I’ve been to many different gyms, I trained under many different coaches and I truly believe training is becoming kinda boring, it’s just boring. It’s very technical. Yes, it’s a technical fight, yes it’s a chess match.

You know back in the PRIDE days, all the fighters tried to finish the fight and that’s what made the fights exciting. The fights not exciting when one guy running away and one guy trying to fight. It takes two to dance. And then when you witness the fights where the two guys show up to fight, you witness something exciting.

When can we hope to see you back in action again?

Yes, I’ve been gone for almost a year now, I’ve been itching to fight. Obviously, in the process, I had to do eye surgery. I had some vision problems growing up as a kid. Hopefully, this is my third operation, my third try. Hopefully, it’s a successful one. I’ve actually had a lot of time to reflect on myself as a person, as a fighter.

Let me tell you, my training is different, my spirit is much different and I’m very excited to go out there and fight. I’m crossing my fingers and trying to get a fight for January.