As Mixed Martial Arts continues to grow in the consciousness of the public, the importance of a strong broadcast team becomes ever more important. Whilst some organisations go the tried and tested root of a specialist play-by-play combat sports commentator alongside a former fighter, the UFC charged away from the competition some years ago by pairing smooth play-by-play guy Mike Goldberg with stand-up comic Joe Rogan.

Whilst not meaning to diminish Joe’s substantial knowledge of the sport and of fighting in general, former UFC exec Campbell McLaren admitted on Rogan’s podcast that he specifically sought out a personality to carry the brand in the early years. And how well it worked. Joe Rogan is widely regarded as the leading voice in the industry and has totally re-defined the art of colour commentary in Mixed Martial Arts.

That is not to say however that other organisations haven’t had success with the more tried and tested partnership. Whilst there will undoubtedly be more on Rogan later in this article, we must first wade through a number of former fighters who have propped up in various promotions as colour commentators.

Whilst knowledge is, of course, a hugely important facet of the art, it is far from a guarantee of success in the booth.  There are a number of highly respected names in MMA that have been underwhelming when making the step into broadcasting. Frank Shamrock, who formed part of the notoriously dreadful Strikeforce commentary team is a prime example of this.

The Rise of Mauro Ranallo

You would be hard-pressed to find anyone in the sport of MMA that has anything but the utmost respect for Shamrock’s knowledge and understanding of the sport, but nonetheless, was part of amateur hour during the peak run of the California-based promotion. As part of a team containing a favourite of the MMA hardcore, former Pride announcer Mauro Ranallo, as well as the perpetually inaccurate Gus Johnson.

Particular highlights included roundly praising Roger Gracie’s striking every time he appeared, and an unexplainable fetish for making every fight sound as though it was close.

MMA icon and 5-time World Champion Randy ‘The Natural’ Couture was among the first to be given a platform by the UFC. After Couture retired first time, he appeared on various B-level UFC events. Whilst often receiving praise for his insight, Couture’s quiet and calm way of speaking was often drowned out by the raucous UFC crowds of the era.

Couture also appeared in the booth at Bellator 96, where once again he was roundly praised for his knowledge and insight but was nonetheless derided for the lack of an entertainment factor in his tone.

That is something that has been the plight of a series of fighters that have moved into broadcasting. Frank Mir, whose commentary for the WEC prior to the UFC merger really split the MMA public. Mir is known as a very intelligent man, in terms of mixed martial arts and in other aspects.

And his detailed analysis of the ground game made him a favourite of the hard-core fans. However he was considered unlikeable to the casuals, and was gradually phased out in favour of Stephan Bonnar toward the end of the WEC’s run.

That being said, there have been a parade of successful instances of this. Pat Miletich was a rare bright spot on the Strikeforce commentary team. A man who has been a roaring success in everything he has ever done in the sport, a world champion as a fighter, a trainer of multiple world champions as head coach of Miletich Fighting Systems in his hometown of Bettendorf, Iowa.

As a commentator, his ability to explain even the most complex issues in layman’s terms, without also alienating the hardcore fan-base by over-simplifying the sport. Oddly enough, despite the universal and widespread praise (including from the likes of Joe Rogan) Strikeforce chose to use Miletich almost exclusively in their smaller shows. Clearly not wishing to spoil Gus Johnson’s expert analysis. 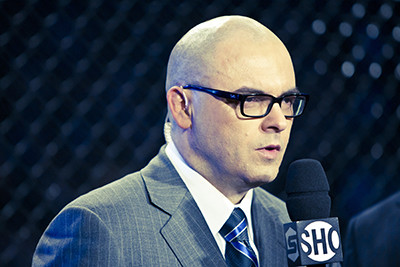 Very dear to your writers heart, PRIDE struck gold with their various broadcasting teams. Combining the brilliant Mauro Ranallo or ‘The Fight Professor’ Stephen Quadros on play-by-play, with the always hilarious Bas Rutten or Frank Trigg, notorious for his no-nonsense analysis.

Likewise the UFC themselves have in recent years branched out into various ‘B’ level commentary teams. The use of Dan Hardy and John Gooden in the UK, as well as Jon Anik, paired with either Kenny Florian or latterly, with the rapidly improving Brian Stann.

A man who has been receiving high praise for his work in the booth as of late, after a difficult start to life as a commentator.

With his on-screen background and big personality quickly gained favour with the UFC execs, whilst his enthusiasm and knowledge instantly won over the viewers.

A former Tae-Kwon Do standout, Rogan combines excellent knowledge of the striking game with an ability to perfectly explain what’s going on on the ground. A black belt under the great Eddie Bravo, Joe Rogan has aided thousands of fans in their understanding of Jiu-Jitsu.

The Art of Colour Commentary

Whilst Rogan has himself said that he believes Mike Goldberg’s job to be the more difficult of the two, the art of colour commentary is immensely difficult to get right. Many have tried and failed, there seeming to be no formula for success. Whilst one revered trash talker like Chael Sonnen appears to have great potential, another, Tito Ortiz, has been a consistent disaster.

Requiring knowledge of all facets of the sport, personality, likeability and an ability to be comfortable speaking on screen, it is one of the most highly skilled positions in a promotion. The likes of Miletich, Bellator’s Jimmy Smith and even Rogan himself have their own methods and philosophies on it.

It is a hugely important role in Mixed Martial Arts broadcasting, and one that will continue to grow, and must continue to grow in order to keep up with the demands of the sport.