It’s hard to believe that Joanna Jedrzejczyk only made her UFC debut just over two years ago. The current UFC Strawweight queen has made such an undeniable impact that it’s easy to forget that in reality, Jedrzejczyk may just be getting started. Nonetheless, Jedrzejczyk first entered the octagon as an undefeated prospect in July 2014, defeating Juliana Lima via decision.

Whilst Joanna showed many of the fundamentals that would quickly make her the champion. She wasn’t quite the destroyer we’d soon see. Regardless. Her strong takedown defence and sharp striking were enough to earn a clear points victory. 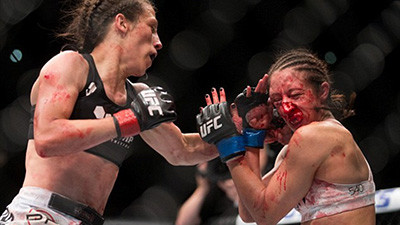 On December 13th 2014, one day following the crowning of the first-ever UFC Strawweight champion. Jedrzejczyk would step back into the cage for a clash with fellow unbeaten top contender Claudia Gadelha. In an incredibly close fight, Gadelha would control much of the action with takedowns.

But Joanna’s striking prowess kept her in the fight, even dropping Gadelha at the end of the first round. The fight would end in controversy as Gadelha landed a punch after the bell, a moment that would foreshadow a rivalry that would heat up sooner rather than later. That controversy would only grow as Jedrzejczyk was elected the winner, two of the three judges scoring the fight in her favour.

The win positioned Jedrzejczyk for a shot at newly-crowned champion Carla Esparza. In one of the most dominant title fights of all time, Jedrzejczyk comprehensively stuffed all of Esparza’s takedown attempts and began to stalk the champion, bullying her across the cage.

Early on, the finish looked inevitable and after some brutally accurate combinations. The fight was mercifully stopped in the second round. In emphatic fashion, Joanna Jedrzejczyk was the world champion. Suddenly, women’s MMA had a whole new feature fighter. One with more striking finesse and ability than had ever been seen before.

The sudden import of violence would only grow in Jedrzejczyk’s first defence too, as she battered a brave Jessica Penne in June 2015. Jedrzejczyk’s pinpoint striking caused serious damage and her innate nasty aggression. Would lead to the fight’s end as it was thankfully stopped in the third round.

Though she had only made one title defence, Jedrzejczyk was already one of MMA’s most feared and revered champions. Only six months removed from a razor-close split decision win, Jedrzejczyk had been so brutal in a victory that she seemed almost peerless.

Valerie Letourneau would attempt vehemently to show otherwise. Though when she challenged Jedrzejczyk in November 2015. The Canadian contender made a strong start but when the hard weight cut began to show as Letourneau’s energy depleted. Jedrzejczyk’s penchant for violence once again came to the forefront.

The confident champion used hard low kicks to wear on Letourneau before tagging her with impressive combinations to win a unanimous decision. Letourneau was courageous in not folding under the immense pressure. But Joanna ensured that the physical damage would be prominent, finish or not. 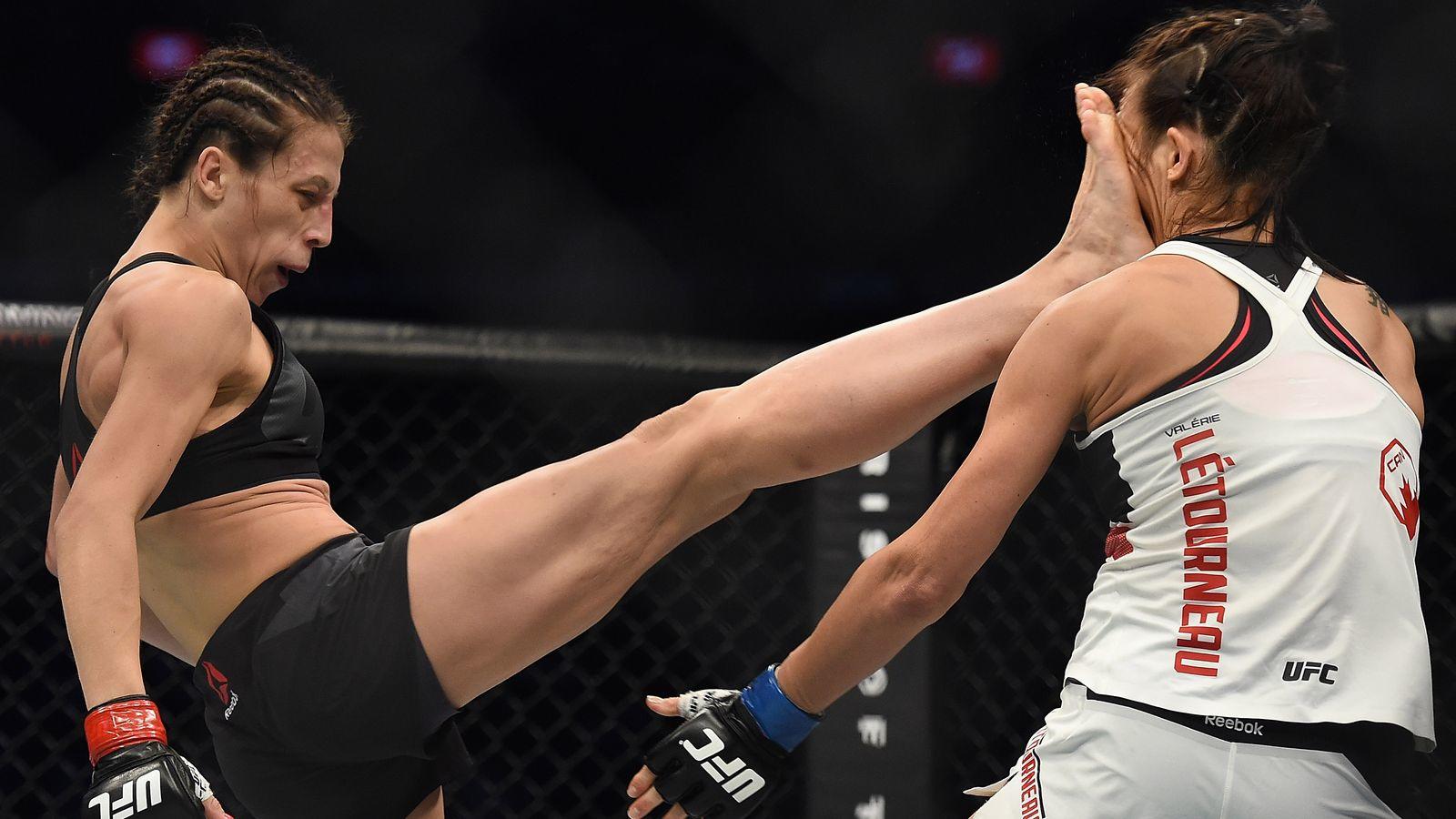 Though she’d fought just once since their first battle. Claudia Gadelha seemed the only deserving next contender and so the rematch was booked. First, though, the two rivals would coach opposite each other on the 23rd season of The Ultimate Fighter. A quite tumultuous season would only heighten the drama as the two fighters regularly went back and forth verbally.

An angered Jedrzejczyk seemingly felt almost insulted that Gadelha felt that she was equal to her based on their first contest. On fight night though, when it really mattered, they were very much equal. Well, early on at least.

Gadelha would briefly drop Jedrzejczyk immediately before using her wrestling to control the action impressively for almost all of the first two rounds. It was a sublime start for Gadelha but the problem was she had been forced to work so hard by the undeterred champion that she was fading, rapidly.

In the third, a tired Gadelha would be picked off both at the range and on the inside by Jedrzejczyk. She was still dangerous though and stunned the champion with a sensational elbow. It was a wild night full of excitement but the tide had turned, Jedrzejczyk was taking control.

The turning of the tide wouldn’t slow in the fourth either, in fact, it would greatly fasten. Almost frozen in the centre of the cage, Gadelha would be hammered by textbook and varied combinations. The challenger’s offence had vanished and suddenly the fight was shockingly one-sided.

Jedrzejczyk had weathered the storm and now took enjoyment in punishing her vulnerable foe. Though not as dominant, the fifth round would be much of the same. After a turbulent start, Jedrzejczyk’s immense stamina and technique had led her to another victory over her greatest rival, thus far.

The beauty of combat sports though is that there’s always another rival approaching. Jedrzejczyk’s UFC 205 opponent Karolina Kowalkiewicz is already a rival in many ways. In March 2012 Jedrzejczyk submitted her countrywoman Kowalkiewicz in an amateur bout. Fast forward over four years later and both stand undefeated, one as champion and the other a top contender.

A battle for national pride, a clash for weight class supremacy, a fight for the undisputed world title. Time will tell whether or not Kowalkiewicz can really test Jedrzejczyk but either way the current champion is in the midst of building a very unique legacy. An identity of her own already created, few bring a brand of violence as brutal as Joanna Jedrzejczyk.

Images courtesy of foxsports.com and mmamania.com