When British fighter Jimi Manuwa joined the elite ranks of the UFC, it was with much fanfare amongst his UK fanbase. A fighter who had delayed his signing with the promotion. Until he believed that he had enough quality fights under his belt, and the time was right. And by all accounts, after his first number of outings, this approach appeared to have paid off.

Cutting through all of his first three opponents inside two rounds. To those not in the know, Manuwa looked like a force to be reckoned with inside the octagon. And a fighter with all the potential to be the first-ever UFC light heavyweight champion to come from the UK.

So when the Brit came up against Alexander Gustafsson at UFC Fight Night 37. Many saw the fight as his seminal breakthrough moment! And an undeniable sign from the MMA Gods that Jimi Manuwa was a man on his way to the very top. But, as history now reminds us, he came up short, suffering a decisive knockout loss for the very first time in his professional career. And, as it happens, to the former number one challenger in the division. 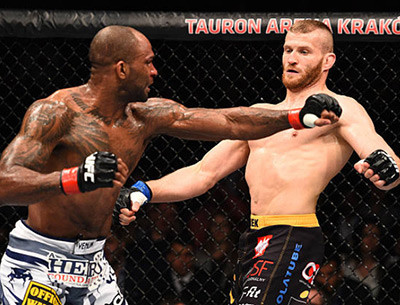 It’s a loss which from the outside looking in seemed to shake Manuwa’s momentum to its very core. The fighter who looked destined for greatness, being stopped by the only guy to push the champion, Jon Jones, to the wire.

And like at least some fighters before him, Manuwa didn’t look to shy away from his loss. Deciding to face it head-on and go train alongside Gustafsson at his base in Sweden. As he searched for the remedy to what and why things had gone wrong.

Jump forward two years and he has now seen a mixed bag of results inside the cage. With a win over Jan Blachowicz, the guy he faces yet again in a rematch at UFC London, Ovince St Preux and Corey Anderson. As well as losses to former top contenders Anthony Johnson and Volkan Oezdemir.

What Does the Future Hold?

There appears to be a pattern, where when Jimi comes up against the very top tier of the division he falls short. And now at 38 years young, which I did not fully realise this myself until now. How much time has he got to prove he has what it takes to go all the way to the top? Sure he’s a light heavyweight and we know the heavier divisions fighters often mature at a later stage… Sometimes.

But with opponents like Anderson 28, Oezdemir 28, Gustafsson 31, all guys who are in or coming into their prime years. And even Ilir Latifi waiting in the wings. That window of opportunity is getting smaller and smaller by the day.

Now, providing Daniel Cormier is still, in fact, the champion, when he finally hangs up those gloves in 2019. It will not doubt open up the division like a drowning managing to fill his lungs with air. With Jones and DC having control of the division like a lifelong dictator. His departure will free up those assets who have been unable till this point to break the grip.

But that is yet another year and several fights away. With the resulting jostling at the top to follow. Where will Manuwa find himself in the mix? Without a win over Blachowicz this weekend, the answer could very well be, nowhere. And with an ever-evolving 205lb pecking order to consider. Will he be able to find that elusive route all the way to the summit and stake his claim to a future title shot.

Lions eat first. But in this unforgiving world, Lions are almost always usurped by the younger, hungrier challengers.