When Jens Pulver lost five straight and got cut by the Zuffa-owned WEC back in 2009. Most in the MMA community assumed it would be the end for the former UFC Lightweight champion. However almost 4 years out from his armbar defeat to Javier Vazquez, ‘Lil Evil’ is still in active competition.

Pulver has dropped from 155lbs all the way down to Flyweight. Before finding a more permanent home recently in ONE FC’s 135 lb division. After going all of 2014 without fighting, he will return this month. On February the 14th, Pulver will travel to the Indonesian capital Jakarta to take on undefeated hometown favourite Fransino Tirta.

In an era where the so-called ‘old guard’ such as Robbie Lawler, Josh Barnett and Vitor Belfort have re-emerged as major players in their weight division. Jens Pulver, a champion in a bygone era will look to spark his own turnaround. At just 6-13 in his last 19 fights, the former Washington state champion wrestler has been far from the force he once was.

However, in his prime Jens Pulver dominated the 155 lb division in the Early-Zuffa era of the UFC. Rarely mentioned in the same breath as his fellow champions and top contenders of the time such as Frank Shamrock. Randy Couture and Matt Hughes, what exactly is the Jens Pulver Legacy?

Similar to most fighters in the fledgeling days of the sport. Jens entered the sport just one expert discipline, wrestling. Pulver decided to enter the 2nd Bas Rutten Invitational in April 1999. With an opportunity to impress then UFC matchmaker John Perretti on the line.

Pulver defeated his opponent, Curtis Hill in 3 minutes, as Hill’s corner threw in the towel. Next up was David Harris, who had just tapped future UFC fighter John Alessio in the previous round.

Harris would go on to win the fight with a toe hold in a gruelling single-round bout that lasted almost 12 minutes and Pulver had received the first setback of his fledgeling career. Despite this, Perretti informed the young wrestler that he believed he had potential and asked him to return for the 3rd incarnation of the invitational in June of the same year.

Pulver duly did and stopped Ray Morales and future Ultimate Fighter winner Joe Stevenson in a combined 89 seconds. Unsurprisingly, the call from the UFC followed. 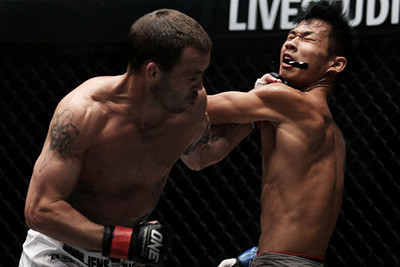 Booked on debut to face Muay Thai exponent Alfonso ‘Alfie’ Alcarez. Jens took the trip to California and trained with Bob Shamrock, a man iconic for his work with troubled young fighters.

And Pulver certainly fitted the bill. Raised in what Jens himself described as a “nightmare”. His abusive father greatly influenced the lives of Jens and all of his family.

One of the more notorious stories involves Jens, at 7 years of age. Having a shotgun placed in his mouth by his threatening father. With a sister often in trouble and a brother serving 55 years, ‘Lil Evil’s success is even more of an achievement.

Bob Shamrock helped harness the anger that Pulver described as a motivating factor. And left the Washington native in fine shape for his first UFC fight.

In a judging error unique to the early days of the sport, an initial decision win for Pulver was overturned just minutes later. When a jubilant Jens was informed in the locker room that a draw was declared with an eye on a rematch.

Though the rematch would never materialise, ‘Lil Evil’ was well on his way in Mixed Martial Arts. And after Bob’s gym, Shamrock 2000 closed its doors, Pulver would make the next step in his career.

One that would take him to Bettendorf, Iowa; and Miletich Fighting Systems. Regular sparring with the likes of Dave Menne, Matt Hughes and a young Robbie Lawler saw Pulver’s skillset soar. And a run of three straight UFC wins saw him land a fight for the vacant lightweight championship.

Victory over experienced Japanese grappler Caol Uno won Jens the belt, which he defended a few months later against Dennis Hallman. A man with two wins over teammate Matt Hughes up at 170lbs.

Whilst Jens was atop the division, a young grappler by the name of BJ Penn was blazing a trail in his efforts to take Lil Evil’s belt. 3-0 in the UFC has never been out of the first round, Penn was off the back of an 11 second knockout of Caol Uno and was heavily favoured against the champion.

The Greatest Performance Of Pulvers Career

In what is widely considered the greatest performance of Pulver’s career, he defeated the young upstart by majority decision. Ending the first chapter in a brutal rivalry that would define large parts of two MMA legend’s careers. Jens left the UFC shortly thereafter, bouncing between promotions including stints in Shooto, the IFL and a four-fight stay in Pride. That encompassed a knockout loss to the consensus #1 Lightweight on the planet, Takanori Gomi.

The pull of the UFC would prove too strong, however. And Pulver would return to coach The Ultimate Fighter season five opposite BJ Penn in one of the most hostile seasons of all time. The two almost came to blows on numerous occasions. 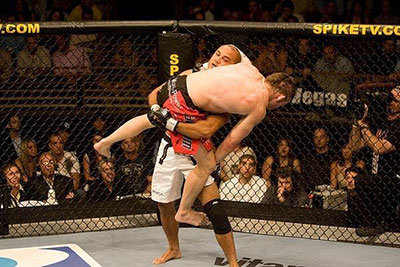 Most notably when Pulver perceived than Penn and UFC President Dana White were colluding against his team on quarterfinal matchups. Penn comprehensively defeated Pulver at the finale, thus ending the rivalry and Pulver’s UFC career to date.

Jens dropped to 145lbs to facilitate a move to the Zuffa-owned WEC, where after a victory against a young Cub Swanson he began the run of defeats referenced at the start of this article. Afterwards, a run of 5-6 since his release from Zuffa employment where the only recognisable names on his record are Tim Elliot and recent Bibiano Fernandes victim Masakatsu Ueda (both losses).

It begs the question if a return to championship form doesn’t seem likely, why still fight? Jens provided the answer to Bloody Elbow back in 2010; “People ask me why I’m still fighting. Why? I’ve got to. Sh*t man, don’t kid yourself. I ain’t rich. I got a family to support. I’ve got to suck it up.”

How Will History Remember Jens Pulver?

So, to another question, how will history remember Jens ‘Lil Evil’ Pulver? Throughout his entire career, Pulver has never given the fans, his employers or his opponents anything other than his best. A true warrior from infancy all the way through to the present day, he is a living example of the rapid growth of our sport.

A legend, involved in some of the biggest fights of his era in the UFC, in Pride and even in the WEC, with many saying his fight with the uber-popular Urijah Faber put the now-defunct promotion on the map.

But despite his success, never made the big money that the sport now offers. Jens Pulver has dedicated his entire life to competition, be it wrestling, boxing (Pulver went 4-0 as a pro-boxer in 2004) or MMA, and it would take a cold-hearted MMA fan not to wish a fruitful last run to one of the most underappreciated fighters to pull on a pair of 4oz gloves.