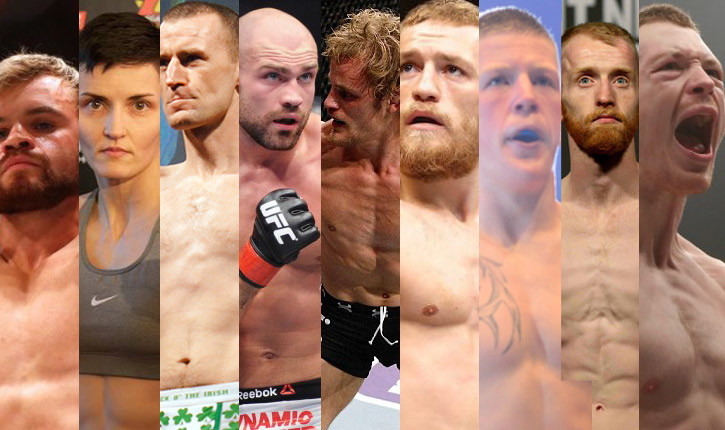 Irish Fighters Competing in Global Promotions Across the Month of July

Just like buses, for a while there’s none, then a whole bunch arrives at the same time! I am of course referring to Irish mixed martial artists competing this coming July. Andy Young kicks off the action on July 3rd at M1 Global in Astana, Kazakhstan. As the Northern Ireland fighter makes his first appearance in the Russian promotion’s inaugural bantamweight division against Sergey Morozov.

Cage Warriors stalwart Catherine Costigan makes her long-overdue US debut at Invicta Fighting Championships 13 on July 9th in Las Vegas against Amber Brown. Undefeated as a professional, the “Alpha Female” campaigned hard for a division title belt prior to Cage Warriors dropping off the radar. But both time and fate were not on her side.

Now with Invicta giving the Pankration fighter a call, Costigan once again has an opportunity to show the world what she brings to the atomweight division. And what a time and location to be doing it. With the UFC in town for its annual International fight week and the highly anticipated UFC 189 card just two days later, all Irish eyes will be on Sin city.

Just a week short of exactly one year ago. For the Irish fighters concerned, the UFC 189 looks a lot like the Dublin card did last July. And kicking off the now-massive event in the early prelims will be Team Ryano flyweight Neil Seery. Seery is due to face Louis Smolka, the guy who beat the guy, who Seery was supposed to face in Australia back in November. You still with me?

Seery will be looking to continue his winning ways and make it 3 out of 3. Giving the UFC matchmakers something to think about as they plan the second half of the 2015 fight calendar.

Cathal Pendred, who has just come off a win in Mexico against Augusto Montano. Eagerly jumped at the opportunity to fill a vacancy on the 189 card left by the injured John Hathaway.

Pendred faces John Howard who is still reeling from three straight losses and now surely finds himself in the sights of the UFC’s ever vigilante pruning department. A win for Pendred here may very well have him knocking on the door of the top 15, a direction in which the SBGI man seems determined to go.

Ireland’s adopted son, who splits his training between SBGI and Mjolnir Iceland. Gunnar Nelson was supposed to be facing John Hathaway, but now takes on Brandon Thatch who could well be a tougher test for the Icelander. Up until his loss to former lightweight champion Benson Henderson, with all of his wins coming inside the first round by stoppage, Thatch had looked outstanding. With both fighters coming off a loss, this matchup could well decide which of the two will be inside the top 15 come next week.

There’s someone else on this card, give me a sec! Oh yes, how could one forget? A little matter of Conor McGregor facing Jose Aldo Junior for the UFC featherweight title… or will he? This one really is touch and go as no one, not even the fighters will know who will face who until July 10th. With Chad Mendes waiting in the wings, making weight as we speak. The main event may turn from a title to the interim title fight in the blink of an eye. All I can say is watch this space and hold on to your inflatable green hats.

Following 189, another two cards will take place midweek. Before the UFC makes its way back across the Atlantic the following weekend for Michael Bisping vs Thales Leites in Glasgow.

Being the first-ever event in Scotland, it’s sure to be another great fight night. And the card is awash with Irish talent, as Paul Redmond kicks off proceedings for the Irish fans against their hometown fighter Rob Whiteford. Redmond is determined to get his UFC career back on track and with a win in Glasgow, he’ll do exactly just that.

The Hooligan Paddy Holohan will be looking to make it two out of two for the Irish as he takes on Englishman Vaughan Lee. Expect a charged but playful atmosphere in the packed Hydro Arena Glasgow as travelling supporters will look to cheer their man to victory. This will be Holohan’s fourth fight under the UFC banner in 12 months as he looks to continue his positive momentum in the stacked flyweight division.

It may only be Joseph Duffy’s second fight in the UFC, but he already finds himself high up the Glasgow card. The UFC is banking on Duffy becoming yet another standout fighter to emerge from Ireland in recent years. And with a solid win over the experienced veteran Ivan Jorge, they may well be right.

Commenting that this will be the toughest fight of his career to date. In Jorge, Duffy is facing a guy with 30 professional fights and only four losses. A win against such a seasoned competitor should not only give him the confidence that the UFC is where he belongs. But will also set the scene for a step up into the upper echelons of the division’s rankings and a run at its top fifteen.

A lot to look forward to as we move deeper into the Summer months. Will we see Irish fighters moving up those rankings and perhaps even getting that Gold? This is MMA and anything can and will happen, so cross those fingers and hold on tight.