At 20 and just 3 fights into his mixed martial arts career. Jay Ar Campos who fights out of Kokoro MMA is already making waves. With his spectacular flying knee knockout at Clan Wars 21. Campos has made it 3 wins out of 3, all by way of stoppage. Not too shabby for a guy who was talked into trying out “all this fighting stuff” by one of his best mates who said that he should give it a go…

“It sounded interesting.. so I just want to get more fights in at the moment.”

And so your last fight was in June of last year, there has been a good gap between these two fights?

Yeah pretty much, the first two fights were in the same year and then I pretty much took the year off. Then after this fight, trying to get more then.

You stepped in for a guy at short notice, did you to know anything about the guy you are taking on?

No, I didn’t really know about him, I just said I’d take it. I didn’t need to cut that much weight as well. So I just took the opportunity.

You are only three fights in and you already have people talking about you all over the international MMA media. Not bad is it?

No, it’s pretty amazing actually. It feels weird it feels awkward for me at the moment. I dunno, it’s amazing, I’m surprised.

You said after the fight that you’d didn’t expect to land that knee and you just threw it?

I didn’t think I was going to land it in that fight, but it happened though. I know I was practicing that in training as well, so I think it just came out of that.
He was trying to actually go for a shoot on me so, he landed on the knee like.

So you’re not too concerned about your opponent’s record going into a fight?

No, I’m not concerned at all, how he fights and stuff. It’s pretty much just having fun in the fight giving the people of a good show. That’s pretty much it like, keeping them happy. If they’re happy I’m happy.

What was the first thing that popped into your own head when you got the knockout?

Jesus, it’s hard to believe like, I don’t know I can’t explain the feeling. But it’s really amazing though. I’d love to do it again, I’d love to do some mad crazy shit next fight.

A lot of the amateur fights end up on the ground, but you like to keep it standing? 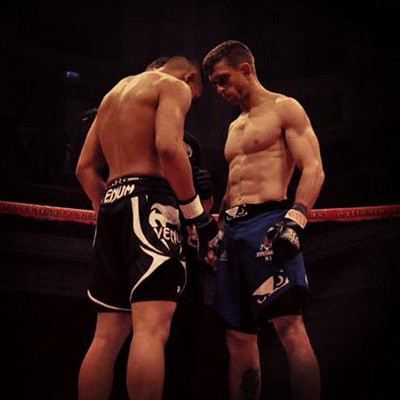 Yeah, I’d try to avoid that actually. Try to avoid getting on the ground, it takes so much out of you. For the people as well, they find it boring. They want a nice exciting fight like. Flying means, flying whatever, back kicks, all that stuff. They want to see that.

You are originally from the Philippines?

Yeah well, I was born in the Philippines, but I grew up in Ireland. I think I was like four or five years old when they moved here. I went there last year, I only go once in a while. The Philippines is an amazing place really hot weather, I’d love to train there one day.

So who are your favorite fighters?

There’s a load of them, too many to name. The first one is obviously Jose Aldo and the second one is Dominick Cruz. The movement, Jesus Christ, the way they move, the way they fight. That’s pretty much my idols.

And the nickname “Chicano” where does that come from?

A few of my Filipino friends just named me, they just call me that.

So do you know what it means?

No, I don’t know, I just went along with it but it sounds cool.

So do you want to make a career out of the sport?

Yeah pretty much I want to turn pro soon, maybe two years time or a year depends how many fights I get in. It’s all about getting experience as well, you get me?