UFC Heavyweights Where Do We Stand?

Even for the blistering pace at which the UFC operates the past couple of weeks have been manic. Most notably in the UFC Heavyweight division which culminated in the passing of the belt, yet again. UFC 198 preserved a bizarre trend which dates back to the inception of the Heavyweight title as we know it, at UFC 12. Every man to hold the belt has been unable to keep it for more than two successive fights. In this case, Fabricio Werdum falling at the first hurdle.

Stipe Miocic’s first-round knockout of Werdum truly confirms the adage that anything can happen once the door is locked behind the UFC’s Heavyweights. Not to mention the second-fastest stoppage in UFC Heavyweight history a little over two weeks ago in Rotterdam. 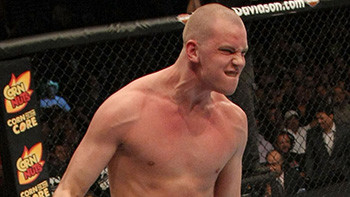 Stefan Struve managed to push himself back to toward the top of the pile with his 16-second finish over Antonio ‘Bigfoot’ Silva in the co-main event. Hopefully, this can kick-start a run for the 7ft tall Dutchman who’s star has somewhat faded as of late given the mass hype around the start of his UFC career. At just 28 years of age ‘Skyscraper’ has more than enough time to fulfill his huge potential and prove the doubters wrong.

Speaking of a career turnaround, there is no doubt who is next in line for a chance at the belt, Struve’s fellow countryman Alistair Overeem. Riding a four-fight win streak which includes a win over, in my opinion, the only other viable title challenger, Junior Dos Santos. This is as close to a shot at the gold Overeem has come since a win over Brock Lesnar in his UFC debut back in December 2011.

The former K1 and Strikeforce world champion finished fifth-ranked Andre Arlovski with a series of ground strikes. Following a Machida-Esque front kick in the second round of their bout in front of a 10,000 strong Rotterdam crowd. With Cain Velasquez booked to fight Travis Browne at UFC 200 it would seem that a title shot is now inevitable for Overeem unless Dana White and co grant Werdum with the rematch he is campaigning for.

However, I find it difficult not to sympathise with the aforementioned Cain Velasquez. The man was held in a similar light to Jon Jones and Demetrious Johnson in the sense that he would rule over his division indefinitely. Cain looked seemingly unbeatable having twice avenged his knockout loss to JDS. Many believe, myself included, that the high elevation cost the man his title in Mexico City to Werdum.

If Cain can exert his overwhelming pressure on Browne I see no other outcome. Then a dominant performance that sets himself up with either a no.1 contender match or a fast track straight to a shot at the belt. That is the least the Mexican fighter deserves considering he was scheduled for a rematch with Werdum. Until he was sidelined with a back injury and the chance was eventually given to Stipe at 198.

The UFC’s Heavyweight division has been in a strange place over the past few years. The ‘Brock Lesnar era’ brought a huge amount of eyes to the weight class and the sport as a whole. As Lesnar left the UFC so did some of the shine over the division. It appeared to me as the sport continued to evolve into the mainstream the Heavyweight fighters were unable to do so with the same momentum. But sure enough, the cogs are starting to turn.

It will be difficult to find someone or something that elevates the division to the highs it had at the time of Lesnar and Co. But there is only one way it’s heading as of now and it shows no sign of stopping.