God In The Ring In MMA

The klaxon, bell or horn sounds the end of a contest in which every crunch of bone, the weaving of joint and ecstatic burst of adrenaline marked zenith and counterpoint of both combatants’ titanic struggle to make themselves heard and to protest to the world that none shall surpass, or deny them their right to ultimate victory. Each recognises the other’s ability through bow, hand-clasp or hug.

This perfect endeavour, this pageant of naked atavism replete with learned skill and testament to headstrong practice, despite social and familial pressures to live in a more mundane manner, is at an end. Finally, one arm is raised aloft, like a banner atop the spoils of victory. Both pugilists are saluted by the crowd, as a triumph of the human body and mind is celebrated throughout the auditorium. A hush descends upon the good folk, as the conqueror, breathing deeply, begins to speak.

This will be no God-bashing, cynical diatribe. How easy it is to describe yourself as an atheist these days, and scoff at those who put faith in the existence of something other than the manifestation of physical laws, much of which has been chopped and changed as often as religious canon anyway.

Romero A Man Of Faith

I am a man of faith, but not religion. I see the need for the recognition of the spiritual, as well as physical, aspects to our existence. My belief is in some non-interventionist entity, who watches on (hopefully amazed), only rarely occasionally hitting CTRL+BREAK on their keyboard to insert some new lines of code. In fact, why shouldn’t the ultimate aim of science be to escape this Petri Dish and meet that which may be the progenitor of existence?

I would still call myself a Christian, as I just think JC seems to have been a pretty sound guy, whose teachings, unfortunately, became quickly over-analysed. Anyway, as Forrest Gump said: “And that’s all I have to say about that.”. I just needed to give you an idea of where I’m coming from as I voice my opinion. No doubt I, like many others, would have been branded a heretic a century ago.

There have been other articles written on this subject, but which have inclined more to the political upset fighters have caused by bringing their beliefs into the ring. Lately, Dana White has professed his distaste at the whole notion, after poor Yoel Romero had an unfortunately timed speech after his victory against Lyoto Machida. I think he was misunderstood in this instance.

Despite how topical it has become as a result, I thought I would break away from the political aspect, and discuss the spiritual of Yoel

“You know, these guys want to talk about God. ‘Oh, I want to thank God’… if I ever found out that God cared one way or another about a borderline illegal fist-fight on Saturday night, I would be so greatly disappointed that it would make rethink my entire belief system.”

God Does Not Belong In The Cage

Despite his supposed omnipresence, God does not belong in the cage, but perhaps outside as a spectator. So let me speculate as to why fighters drop the name from time to time. Note that for the purposes of this article, I will just be referring to the Abrahamic faiths’ God.

You could just as easily swap him/her/it/them out for Buddha, the Universe, Mother Gaia, the Hindu pantheon or whatever your own spiritual belief system is. If you have none, then just play along!

Interventionist Beliefs or Karma – Jesus won me the fight

The belief is that reward will be granted to the more faithful, or to those who have lived a more blessed life. This is the one that annoys me the most. It is certainly transferred hubris, and possibly guilt. Rather than outwardly admit they themselves have just beaten seven shades out of their opponent, they instead declare that the win was Christ’s.

Not only is this an outrageous statement of itself (Jesus was largely, but not always, a man of peace), the victor is actually rubbing salt into the wound of the defeated combatant be declaring them to be less worthy of divine favour. 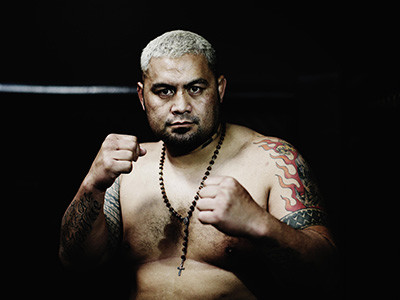 I can’t profess to know the unknowable, but my own beliefs would indicate that God does not play favourites. Ever. This is why sometimes crap things happen to good people, and incredible evil goes unpunished.

The Power Of Faith

It irks me when fighters attribute victories in this way. They speak very nicely about their opponent and then proceed to calumny them on religious grounds. In most cases, they probably don’t have a clue what they’re saying, which makes it even more bothersome. This is one of those times where you must suppress your profession of faith, and show a little emotional intelligence.

I don’t quite get what the drive is here. Is it a humble-brag? False-modesty? Perhaps even genuine modesty? Whatever the reason, this is another behaviour that should be reined in.

Here’s the kicker: it was all you, baby. The contest is one of human physicality, strategy and tactics, and spatial intelligence. Often it is only by genetic quirk (or perhaps the hypodermic needle!) is one naturally gifted at whatever one happens to excel at in life. Most can improve to a similar skill level through training: a human doing a human’s work. I don’t believe any deity is directly responsible for creating your skills or traits.

They are genetic and environmental. Whilst I do believe some sort of entity sparked the initial burst of creation with the right balance of everything for our universe’s physical laws (including those which governed the creation of life) aeons ago, it has been a multi-billion year journey of evolution that has more or less determined what you have become.

To those fighters who employ this, I would say that they should give themselves a little more credit for their achievement. It’s not pride: just a matter of fact.
Faith as a Focus – Jesus Helped me

What Is The Ultimate Goal?

This one is ok for me. If you’re a driven person, and fighters must generally be, then you usually have something vivid that acts as some sort of compass towards your goal. Perhaps it’s the ultimate goal itself, or some longer-term objective. For example, the next stripe or colour of a belt, a championship, or simply a successful move. Hell, maybe it’s a turnip… whatever works for some people!

Or perhaps it’s people? Maybe your ultimate aim is to provide for a loved one or family or fight in memory of a lost loved one or for charitable reasons. Have you ever had a role model or idol you looked up to, or still do? I think a goodly number of fighters have that too. Using the positive behaviour of others is a laudable way of inspiring you to reach your stretch goal.

So why not have a focus of a religious figure or entity? No problem to a point. I would advocate this insofar as it gives one impetus to persevere, and give direction and general drive to attain one’s ultimate objective. If it morphs into a sense that the entity makes the fighter somehow superior, then, according to my beliefs, that’s intolerable.

I Still Have No Clue

All this is speculation, despite anyone’s level of faith, and this is all my opinion, based on my own beliefs. It is unknowable, of course, and so I don’t know any better than you. From a moral standpoint, I’m like most others: I strive to live a good life, but occasionally fall on my butt. I’m not saying I’m better than anyone!

I hope I haven’t offended anyone with this small article, but religious exaltation in combat sports was beginning to get to me.

If anyone takes anything from my spiel, it’s this:

– No entity is directly responsible for your skill or actions.
– Don’t declare your superiority on religious grounds, especially where you intimate moral prestige, and then go out and act like a dick. Deeds, not words.
– Celebrate the human side of yourself, rather than the divine, in the ring – the ape, not the angel, as it were! God knows you’ve earned it.