Give Us Nick Diaz vs Georges St Pierre 2

The word on the street is Georges St Pierre is nearing his return to the octagon, and at this stage of the game, there is only one fight that truly makes sense.

St Pierre and Nick Diaz finally got to throw down at UFC 158 in what was one of the most anticipated bouts in the organisation’s history. Diaz had been very vocal for years proclaiming that he was the number one welterweight fighter in the world. Especially in his Strikeforce days where he was the dominant 170 lb champion.

But as dominant as the Stockton man was in Strikeforce, St Pierre matched that dominance and more in the premier MMA organisation in the world. There was a logical argument on both sides of the fence to whom actually was the best. And when the UFC purchased Strikeforce in 2011 it seemed the score we all wanted to be settled was imminent.

However, Diaz being Diaz through a spanner in the works when he failed to show up for a UFC 137 press conference where the pair were set to face off. The UFC reacted by pulling Nick from the contest and awarded the title shot to Carlos Condit.

The former Strikeforce champion was then paired with the great BJ Penn for his return to the promotion and he didn’t disappoint. Diaz beat Penn from pillar to post that night and further enhanced his argument that he was the number one welterweight in the world. 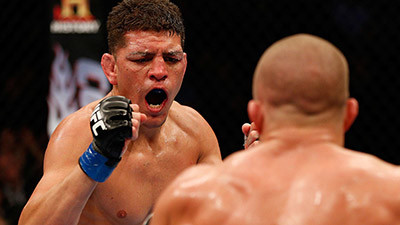 This was it now, finally, we were going to see the two best welterweights in the world go to war. Sadly not, tragedy struck again when St Pierre injured his knee and would be sidelined for quite some time. This meant we would be made to wait again for the fight to finally happen.

If Nick Can Get Past Carlos Condit

And it was definitely going to happen, providing Diaz got past Condit for the interim title. Easier said than done however, Diaz came up short and was on the losing side of a split decision that really could have gone either way. If that wasn’t enough the Nevada State Athletic Commission deemed the fact Nick likes to smoke a harmless plant from time to time, unfair behaviour and banned him from competition for a year. Where we ever going to see this fight?

Yes, we were, and we did. Diaz returned from his suspension and soon was scheduled to take on the long-reigning UFC champion in his home country Canada. What resulted was conclusive, Georges St Pierre was the best welterweight in the world, or at least the better man on the night.

That was three and a half years ago, and a lot has happened in the careers and lives of both men since. St Pierre defended his title against Johny Hendricks and looked a shadow of the man that faced Diaz. And was extremely lucky to have been awarded the decision on the night.

This along with personal issues provoked the Canadian into a hiatus from the sport and the MMA community have been waiting on his return ever since. Likewise, Diaz has been an absent figure in this time, with only one middleweight bout against the greatest of all time Anderson Silva sandwiched in between two suspensions.

It’s fair to say that since their big fight back in 2013, both men’s careers have taken a serious turn for the worse. So what better way to undo this dreaded curse than to roll the tape back and do it all over again. We waited long enough for the first fight I think we deserve a second instalment. 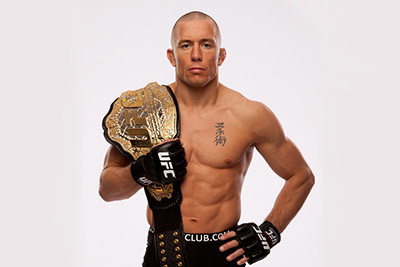 There are people out there who will say “what’s the point? St Pierre battered him the first time”. And that’s fair enough, but any elite fighter can beat another on any given night, we have surely all learned that by now.

They have both stated that they only want a big money fight, and other than a red panty night with Mystic Mac. I can’t see any bigger payday than this. If anything Nate Diaz’ gain in popularity in his pair of flings with McGregor has probably also enhanced his brother’s popularity in this crazy world we live in.

There’s also the fact that both men are coming back from long absences. Which conveniently takes away the ring rust factor. I actually feel it adds an extra spice to the contest and should be a dream for those tasked with making promotional videos for the UFC.

Who else is there out there really to face either man? St Pierre has been touted alongside Anderson Silva. But that fight was supposed to happen five years ago. It has a Pacquaio Mayweather anticlimax feel about it if you ask me.

Let’s do Nick Diaz versus Georges St Pierre 2, and let’s do it now. UFC 206 in Toronto needs a main event and there aren’t two better men available to fill it. The UFC needs to give the pair the money they deserve, give the fans the fight they deserve, and then we can all sit back and enjoy and take it from there.