When Fighters Get Cut From The UFC

After almost every event, a number of fighters in the UFC will find themselves released. Often it will be fighters on a 3 or even 4 fight losing streak and they will be out and moving on with their mixed martial arts careers. Before the casual fan even notices they’re gone.

Occasionally such as with Jon Fitch and Yushin Okami, the UFC create considerably more fanfare over a release by cutting a current contender. The response to “getting cut” differs from fighter to fighter, and is one of the most intriguing tests of a modern mixed martial artist.

A recent winner, UFC veteran Efrain Ecudero is as good a place to start this article as any. Comprehensive domination of Brazilian Rodrigo de Lima in Broomfield, Colorado. Earned him his first UFC win since May 2010 when he decisioned Dan Lauzon back at UFC 114. ‘Effy’ appeared on The Ultimate Fighter season 8. As a member of Team Nogueira, and would go on to win the season.

Victory over Cole Miller would round out 2009, but losses the following year to Evan Dunham and a young Charles Oliveira (a fight in which Escudero missed weight). Would lead to the Mexican receiving his release papers. The response to this though was admirable.

Escudero dropped back to the regional circuit and won three straight fights. Going on to compile a record of 5-1 over the next 13 months in a run that included stays in Bellator and California based promotion Tachi Palace Fights.

Returning To The UFC

Escudero returned to the UFC on short notice to take on Jacob Volkmann next, and despite a submission, the loss was retained. A loss to Mac Danzig followed soon though and the John Crouch disciple found himself cut a second time from the world’s largest promotion.

Again, an impressive response would follow, including a victory on the undercard of Bellator 100. And Effy once again received the call from the UFC. 1-1 in his third stint, Escudero has proved himself a reliable option for Joe Silva and has won many fans from his mental fortitude.

Contrary to the response offered by the likes of Escudero, fellow former UFC lightweight Jens Pulver had a rather different career following his release. Cut from the UFC following a loss to BJ Penn back in 2007. Pulver dropped to featherweight and won a hard-fought decision over a young Cub Swanson.

Before going on to lose his next 5 fights, including 4 consecutive stoppage defeats whilst under contract at Zuffa owned promotion WEC. Pulver was defeated by the likes of Urijah Faber, Josh Grispi and Leonard Garcia before turning his career around somewhat back on the regional circuit.

It is a similar story for Jon Fitch, who was released by the UFC amongst a social media backlash back in 2013. Ranked #9 at the time of his release, UFC management claimed Fitch’s hefty contract of $66,000 to for the show and the win was to blame for his unexpected firing.

The former title contender switched to the up and coming World Series Of Fighting. And was matched up with Josh Burkman in his first fight. Burkman himself was a UFC veteran and had been released by the promotion after a loss to Serra-Longo mainstay Pete Sell back at UFC 90.

A heavy favourite, Fitch was hurt early by strikes and then finished by a guillotine choke to stun the MMA world. He would return against Marcelo Alfaya later that year, and would fail to impress again in a split decision win at WSOF 6.

Victory over Dennis Hallman came in 2014, but that was followed with a first-round kneebar loss to Rousimar Palhares last December. A fight in which Fitch failed his pre-fight drug screening from the California State Athletic Commission. 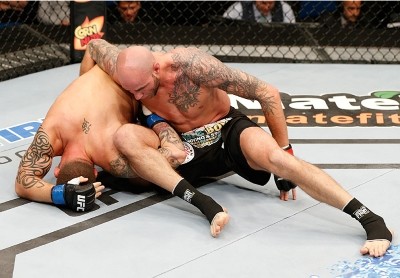 Upon release from the UFC, there are generally two ways a fighter can go, back to the regional promotions that many of them originated in to look for a way back. Or, if the opportunity presents itself, to one of the UFC’s competitors.

Bellator and World Series Of Fighting have supplemented their own stars with UFC alumni for much of their existence, as did Strikeforce, Affliction and EliteXC before them.

Recently WSOF has snapped up Fitch, Yushin Okami, Jake Shields, Rousimar Palhares and Melvin Guillard upon the end of their time under Zuffa contract.

No Time For Funky Ben Saunders

Likewise for Bellator, who have heavily featured Tito Ortiz and Stephan Bonnar in their recent history. Some though do manage to take a piece of both of those options. Ben Saunders, who enjoyed a 4-3 UFC stint in his early career, is a prime example. Victory over Marcus Davis was the most memorable point of Saunders’ original stint, but the welterweight was cut after a 1-3 run back in 2010.

He joined Bellator the following year and had a successful run in the company making the Season 5 and season 8 final, losing on both occasions to Douglas Lima. After an 8-2 run, Saunders rejoined the UFC last year and won Submission Of The Year with an Omoplata and is now 2-0 with a fight booked against Erick Silva in Rio. Heavyweight king Fabricio Werdum is another prominent example.

Cut after a loss to Junior Dos Santos at UFC 90, Werdum joined Strikeforce where he went 3-1 and helped remove the veil on Fedor Emelianenko’s invincibility. With an early triangle ending the fight in the first. A return to the UFC has brought great success, culminating in an emotional Heavyweight title win in Mexico last year.

A Changing Point In a Career

An inevitable moment in the career of many fighters, being cut can be almost as big a career changer as getting hired in the first place. As proven by the given examples, anyone is at risk despite your perceived ‘status’ in the company or the division.

However also as shown in the given examples, no matter what your circumstances. It’s never too late to turn it around, be that back inside the Octagon, or be that elsewhere as Rousimar Palhares has done.

With the likes of Werdum, Saunders and Andrei Arlovski showing it is possible to go on to make waves in your second chance. As in any walk of life, losing your job can never be positive. But can produce a powerful reaction in the individual. If harnessed correctly, that can be used to win championships and make better money than ever. But on the shoulders of the wrong fighter can all but ruin a career for good.