With the news that newly-crowned UFC middleweight champion Georges St Pierre, will be vacating his title effective immediately. A certain degree of both confusion and inevitable reluctant has quickly descended over the division.

If anyone’s cares to remember that pre-UFC 217. Many had called it, saying that should he win, St Pierre would not, in fact, defend his title. But, to a degree, those naysayers were appeased when UFC president Dana White came out and reassured all concerned that St Pierre’s contract stipulated that he had to defend his belt at least one time, case closed! Or so we thought.

Roll forward a little over a month and murmurings of GSP being sick with a dose of colitis surface. Once again bringing the champion back into the spotlight. Dana White was quick to step in and say that the illness was no a big deal and that, “Georges will be out for a minute..”

Well, thank goodness for that. That put paid to those negative Nancy’s whose ears had pricked up following the original announcement.  But it wouldn’t be too long before Georges himself was on mainstream TV. Discussing his current state of health and hinting at him once again, taking an indefinite leave of absence from the sport. And with that, the vacating of his newly acquired title at 185lb’s.

Fast forward what may have been counted in hours and an official announcement came. Stating that St Pierre would be vacating his title effective immediately. Which was quickly followed by a newly minted promotional poster for Robert Whittaker vs Luke Rockhold February 10th, at UFC 221 in Perth. Which was seemingly prepared in no time at all!

The whole announcement had the appearance of a carefully choreographed, pre-planned decision. With the fans being the ones who were lead down the garden path. 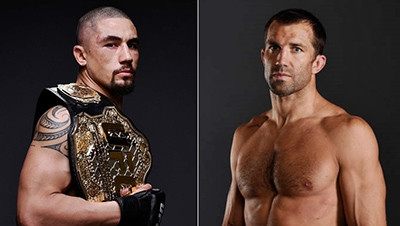 And look, it’s not like this doesn’t work out well for all parties concerned. GSP got his second belt. Robert Whittaker gets his rightful crown and Rockhold gets himself back in the mix. Job done, nothing to see here, let’s move on.

But it’s that niggling thought at the back of your mind, that all along, you were the one being fed a lie. Like there’s a great joke doing the rounds. But that joke is on you.

With all but a peep from the UFC, you have to ask yourself, who knew? Was this the plan from day one? As it’s a pretty weak contract that doesn’t seek to confirm the current state of health of your champion. Or perhaps it’s that his local doctor’s word will do just fine?

Georges St Pierre is out. Robert Whittaker installs himself in what many people believe is his rightful position as the best 185er in the world. And Luke Rockhold gets his opportunity to exorcise his demons. Life goes on and the world keeps spinning.

Albeit with a little less trust in someone’s word. Fool me once, as a US President once said, while proceeding to f#$% up the rest of the quote… But you know how it goes.