You have been an inspiration to many by demonstrating the true meaning of a champion. You have one of the most reputable legacies in UFC history, compiling victories over fighters such as Matt Hughes, BJ Penn, John Fitch, Carlos Condit, Jake Shields, and lastly Johny Hendricks (more on this last fight later).

Many fans have watched you evolve as a fighter and overcome adversity. Rising up through the ranks, you faced Matt Hughes at UFC 54, when you walked in you couldn’t even look him in the eye as you were so nervous. After losing in the last seconds of round one via a slick armbar from the champion, everyone watching that fight knew you would be back to fight for the belt.

Next, after that loss to Hughes, you went on to win five consecutive fights earning another title fight with the man who many considered to be the best pound for pound fighter in the world, the man who last beat you, Matt Hughes. I remember noticing how different you looked walking into the cage, there was something in the way you looked at him, the way you held yourself with your head high in the air,

After winning the title in dominant fashion, fans everywhere believed that you were going to be the most dominant champion in UFC welterweight history. However, there was someone out there who had other plans for you, Matt Serra. After Serra shocked the world, and beat you, I think we saw you reassess and grow not only as a fighter but as a person. This loss would motivate you and make you hungrier. After coming back and absolutely dismantling Serra, this would mark the beginning of one of the most dominant reigns in UFC history. 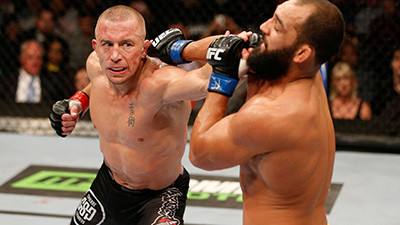 After defending the title eleven times, you faced the biggest threat of your career in Johny Hendricks. This fight was a hard fight to watch as a journalist, as a fan, and as a fellow Canadian. Although a controversial win in many eyes, this fight was extremely close and you deserved the win.

But that is the last thing in the fight that anyone should be focusing on. You had your most important highlight-reel moment in that fight. No, it wasn’t a takedown, a combination of strikes.

It was stepping away from your career at its peak on your own terms; by far the hardest thing for any professional athlete to do. Many have attempted this feat, however, very few have been successful. Time and time again we have witnessed greats, fight one too many fights.

We’ve seen it in boxing with legends such as Sugar Ray Leonard, Roy Jones Jr, and Mike Tyson. And we’ve seen it in MMA with Chuck Liddell, BJ Penn and most notably Gary Goodridge. These fighters came back and took unnecessary damage that will affect them for the rest of their lives.

St Pierre Coming Out of Retirement?

This is all to say, please do not come out of retirement for the wrong reasons. You have proven to everyone that you were one of the best fighters of all time. You have accomplished everything there is to accomplish in the sport and you have been a positive role model for anyone who has witnessed your career. There are fighters out there right now who are contemplating retirement and are looking at you as an example of someone who left the sport at the right time and on their own terms.

You have helped remove the negative image of fighters by being educated, well-spoken, kind and generous. It is athletes such as yourself that make for great role models for children around the world, and you have undoubtedly made a positive difference in the lives of people from all walks of life through your career.

So please, from a journalist, a fan, and a fellow Countryman please keep your health a priority when considering coming out of retirement. And know that you will always be regarded as one of the greatest of all times regardless of your decision.

PS: I have never been a professional athlete at the peak of my career so my point of view is maybe slightly irrelevant. Nonetheless, whatever decision you make, fans everywhere will support you.