As you can imagine, every time I have been ready to press the submit button on this blog over the last 3 weeks, something crazy has happened. So, no matter what happens in the next 15 minutes, this will be submitted and this is, Keego on, retirement, regulation and the sports business.

When I started this it was just after dropping in to have a word with my good Twitter friend George Hook. I had been tweeting him to ask for a conversation about MMA, regulation and just generally what the sport is about. I assumed this conversation would be over a coffee.

But he called my bluff and put me on the radio in the ears of 200 thousand listeners all over the country. It was mainly about the backlash against the sport after the unfortunate and just horrific death of Jiao Carvalho in Dublin.

George was genuinely interested in the sport and what it was. I explained this and without naming names, asked for calm in the reaction to the recent events in Dublin. I understand someone lost their life and there is nothing that can be said to make that ok. I just thought it was important to point out what actually happened at the event, and in events in general on that night.

My main point was that maybe the answer, in the short term while regulation is worked on, is to educate the referees a bit more. Especially on the amateur level. Much like any sport, the top-level referees are generally at a very high standard with player/fighter safety at the forefront of their concerns. Whereas the amateur level might lack in education.

Maybe the code blue people (codeblue.ie), they take care of the fighters on fight night, could produce a video showing what the refs should look out for. Signs of a change in movement etc which could be a result of trauma. That would mean the ref can bring in the doctor earlier and prevent anything overly harmful happening. This would work in all combat sports at all levels.

For all the grief George gets, he was fair with me and that’s all I judge people on.

Listen back to the interview here (starts approximately 10 minutes in!)

Just as I was about to submit blog 1, there was a tweet from Conor McGregor which read ‘I have decided to retire young. Thanks for the cheese. Catch ya’s later’. That was it. Twitter went insane. Everyone in Ireland went insane. Was this real? Was there a test failure? Is this a game with the UFC? Where the rumours of bad behaviour true?

The answer came to light fairly quickly. While Conor was training in Iceland, the UFC were holding a press conference in Las Vegas to promote UFC 200, the biggest show in history. The UFC wanted Conor there, Conor wanted to train and felt he was entitled to a bit of leeway in preparing for the Diaz rematch, the UFC disagreed. 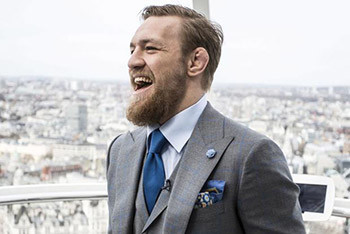 For me, I am 50/50 on this. It is hard to be objective when I am a McGregor supporter. But when your boss tells you to do something you basically have to. In saying that, when you generate the kind of revenue for your boss that McGregor does, then should you not have a small allowance. Especially after the work, he has done.

The Mendes and Aldo fight where totally promoted by Conor, minimal input from both opponents, world tours, multiple interviews and he still made the walk, fought and won.

It appeared the gas was gone for Diaz. He looked great and was in control, but when the petrol runs out, the car won’t go anywhere and that is what happened in the fight. That and the fact that the Diaz brother are beasts.

So now, Conor is off the biggest event ever. Costing the UFC tens of millions of dollars. Conor (a multi-millionaire) decided to take on a billionaire and this is what happened. The replacements are good, but nowhere near McGregor V Diaz2. Both sides may have been stubborn. But the fact is, we won’t get the fight for a while longer. And that is disappointing.

Now the questions is, was this a genius marketing ploy for UFC 201/202/203? McGregor’s tweets are not the most retweeted in sporting history. The promotion has already been done for his next fight.

Maybe the UFC were happy in the knowledge that they will get 1.5 million buys for UFC 200 and they want to spread that Conor magic through a few more cards during the year? Thus bringing the total gate receipts for the year up hugely. They are smart folk there in the UFC.

So now for UFC 200, we have Jones v Cormier 2 as the main event. I really hope Daniel beats jones. Based on the last Jones fight I think he can do it. Jon is a polarising figure. He is the best to ever fight in MMA an absolute beast, unbeatable when he is in the right frame of mind. But he has thrown it all away.

He is human after the last fight. He could have been a dynasty fighter, one we talk about in our old age, but now he is a joke. So before something else happens in the world of MMA. I am submitting this piece to the editor.

Until next week, its @nkeegan