“The Greatest Martial Artist on the Planet”

As a troubled young boy in California moving from foster home to foster home, only punctuated by run-ins with the law, fate would eventually push Frank Juarez into the home of Bob Shamrock. Shamrock, as he had done for so many other young delinquents took Frank into his home, and created a legend.

Bob Shamrock was a truly inspiring character. Taking in boys between the ages of 13-16, usually in groups of 8 at a time, Shamrock and his wife Dee Dee looked to correct the paths of young men whose lives had drifted into the rocks. Without wishing to spend this article profiling the wrong man (you can see Jake Rossen’s piece for Sherdog for a more appropriate tribute to the late patriarch of the Shamrock Boys’ Home) Bob attempted to change the lives of hundreds of young boys for the better.

Two of those, including the aforementioned Mexican-American Frank Juarez who would later be officially adopted by Bob at age 21, would go on to become legends in the emerging sport of Mixed Martial Arts.

Frank was paroled from Folsom Prison in Northern California in the early 1990s and was at a crossroads in his life. His adopted father pointed him the direction of another of Bob’s projects – the Georgia-born Ken Kilpatrick, by then himself adopted as Ken Shamrock and the infamous Lion’s Den fight team.

Ken, who had already competed in Pancrase as well as suffered a loss to Royce Gracie at UFC 1 was one of the burgeoning names in the sport and ran his adopted brother through the wringer. As Frank told MMAFighting.com, , he was having his limbs ripped apart by his brother before he found himself spending 8 weeks in Japan, preparing for his MMA debut in Pancrase.

Shamrock took on Dutchman Bas Rutten (the subject of a previous MMA Intrigue instalment ) in the first round of the King of Pancrase tournament, against whom he would win a razor-close decision despite Bas’ greater experience in professional fighting. He would follow up with a submission loss to Manabu Yamada, who would eventually go on to lose to Ken in the finals of the very same tournament.

Frank would return the next month with a win over Katsuomi Inagaki, before going 1-1 against Pancrase co-founders Minoru Suzuki and Masakatsu Funaki. Shamrock would spend the first couple of years of his career under the Pancrase banner, becoming the Interim King of Pancrase, as well as enjoying marquee rematches with Rutten, Suzuki and Yamada.

He also took part in an infamous bout with Brazilian Allan Goes that involved eye-gouges and Shamrock breaking Goes’ leg with a heel-hook. Journalist Dave Meltzer later referred to this as the first ‘fight’ in Pancrase history.

During Ken Shamrock’s feud with the Pancrase brass, Frank was fired after being caught in the crossfire. Although it was around this time that cracks were beginning to appear in the relationship between the two brothers. With Ken now in the WWF, Frank was largely left in charge of the Lion’s Den team.

As was traditional with MMA camps at the time, the Lion’s Den focused almost entirely on skills training. A new addition to the team, Maurice Smith, exposed the flaws in this with his superior conditioning. Thus, when Frank fell out with his brother’s team completely, he along with Smith and a young Javier Mendez left to form ‘The Alliance’. 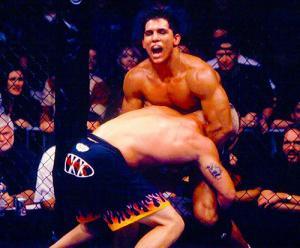 Shamrock would return to Japan in late-1997, where he would face Yamato-damashii himself, Enson Inoue in a fight he often refers to as the toughest of his career. Like most of Inoue’s bouts, it was a back-and-forth war. Frank ended it with a vicious knee that saw Egan Inoue run into the ring to check on his brother.

The win over Inoue earned Shamrock a UFC debut, and with it a shot at the UFC Light Heavyweight championship. He would take on Kevin Jackson, a gold medallist in wrestling from the 1992 games in Barcelona. Jackson was off the back of a tournament win at UFC 14.

And had a win over Shamrock’s conqueror, John Lober on his record. Frank though proved MMA math irrelevant, arm barring Jackson in just 16 seconds to win his first belt as a professional fighter.

Though Shamrock’s days as champion were in the notorious dark ages, he became one of the most decorated champions the UFC. A brutal win over a young Tito Ortiz at UFC 22 would prove to be Shamrock’s last in the UFC. As he ‘retired’ from the promotion as champion with a 5-0 record. 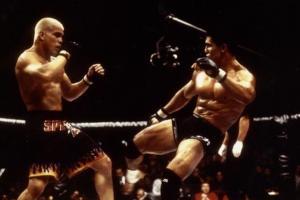 His first retirement would be brief, as he would return in Japan once again to defeat Australian Elvis Sinosic at the 2000 K1 World Grand Prix Final, he would pop up again to defeat Bryan Pardoe at WEC 6, but it wouldn’t be until the beginning of the next boom period of MMA that the final chapters in his great career would be written.

Shamrock would headline the debut event for new Californian promotion Strikeforce, with a knockout victory of Cesar Gracie. In Elite XC, he would lose via disqualification to Cesar’s cousin, Renzo, before choking Phil Baroni unconscious in the summer of 2007 to win the Middleweight championship.

Frank’s final title fight would see him out-struck by Cung Le and eventually stopped on his stool by way of a broken arm at the end of the 3rd round. He would call time on his career after a TKO loss to a man 11 years his junior in Nick Diaz.

Frank Shamrock was one of the best fighters of his generation, and a vital figure in the history of the sport. A pioneer that transformed training methods and thoughts on conditioning, he was one of the first true mixed martial artists and his legacy is intact in the eyes of those who remember.

He was past his prime by the time major coverage landed in his lap, and an ongoing dispute with UFC President Dana White will probably mean he never gets his dues from the world’s largest promotion. Frank Shamrock may not remain in the MMA consciousness as some of his peers will, but anybody that saw him at his best will agree that he deserves his place in the MMA history books.