Renan Barao went 0 for 2 against Bantamweight champ T.J. Dillashaw this past weekend, leading many to call for the former champ to jump up a weight class to the featherweight division where his long-time training partner Jose Aldo rules the roost, for now. He is not the first fighter to suffer a loss and hear the calls immediately to leave the weight class and won’t be the last, but perhaps he should heed those calls.

Dana White was not alone in calling for the move and while I often feel calling for a fighter to move division immediately after a fight is somewhat premature there is enough of a reason for Barao to consider the benefits. The simple facts are that Barao, after losing two title fights, is years away from a third especially if the Champ remains Dillashaw.

There are not any big fights for Barao are 135 and killing himself to make the weight seems like a waste when he can easily go up in weight and retain his power and speed.

Lyoto Machida, John Dodson, Anthony Johnson, Uriah Faber, Nate Diaz, Frankie Edgar, Chael Sonnen, Robbie Lawler, and Jake Shields are prime examples of fighters who switched weight-class to the benefit of their careers, with every fighter mentioned getting a title shot in there new division and some like Lawler winning the belt.

Too often the call for a  fighter to change division comes prematurely and in the heat of the moment but sometimes, just sometimes, the call should be heeded…Here are the fighters that could benefit from answering that call.

Frankie Edgar can rightly feel that he is being over-looked for the title shot at featherweight, after mauling Cub Swanson and BJ Penn the former lightweight champion was skipped by the gifted Irishman Conor McGregor. McGregor draws in the fans be it casual of hardcore whereas Frankie has always struggled to garner the same attention.

Edgar was once again skipped when Chad Mendes jumped him to take injured Champion Jose Aldo’s spot to face McGregor. Now, Frankie is back to square one, Conor will once again face Aldo, whenever the Brazilian is healed which could be a substantial time. The scenario leaves Frankie in limbo and for an ageing fighter, this can be as bad as a loss.

However there is another option, TJ Dillashaw recently dismantled Barao to leave the division incredibly bare. Teammate Faber is the only healthy option inside the top 5. Dana White has already given his backing through social media so it seems the ball is firmly in Edgar’s corner if he wants a title shot he has to drop down to get it. 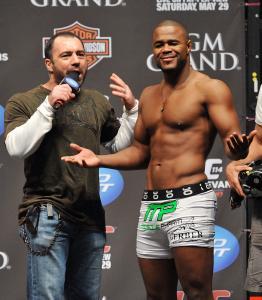 Rashad Evans has been one of the main men at 205 since first winning the belt. Always near the top of the division, his last title shot came with a defeat at the hands of Jon Jones back in 2012. He has since only fought three times since then due to injury and the 35-year-old is scheduled to fight Ryan Bader at UFC 192 in Houston Texas.

Now with a win over Bader, he could possibly be in line for a title shot but the reality for Evans is that every fighter ahead of him at 205 has a significant advantage over him in size, with the exception of Champion Daniel Cormier who has a similar but more aggressive style than Evans.

Dropping Down A Weight Class

While he might never drop down to middleweight, it could be the place where Evans regains UFC gold. The middleweight division is stacked but a fighter like Evans would consider himself favoured over many of the top tier guys and instead of getting Evans vs Bader, which is somewhat intriguing.

We could be looking at Evans vs Rockhold, Jacare, Romero, or even Weidman. Coming off his long injury lay-off a drop to middleweight could be the perfect place for Evans to re-invent himself.

The featherweight Champion has long claimed he will eventually move to lightweight and the time might just be perfect after his next fight with Conor McGregor. Aldo seems to be a fighter tiring with the fight game, critiquing the UFC over salaries and Reebok is not the hallmark of a fighter that is here for much longer. The Brazilian might well have one eye on the door but before he goes a move to lightweight might just be what the Champ needs.

With incredible match-ups on offer and big money fights, even if they’re not title fights and not having the stress of the tough weight-cut might be too enticing for the Brazilian to turn down. Aldo vs Pettis, Henderson, Dos Anjos, Cerrone, and Alvarez are all mouth-watering fights and a break from his cycle of rematches at featherweight.

This jump in weight seemed all but certain two years ago but has cooled recently, it is hard to see anything but this happening after the McGregor fight as the only option for his next featherweight fight is another rematch with one of the top 4.

Shogun The Destroyer at Middleweight 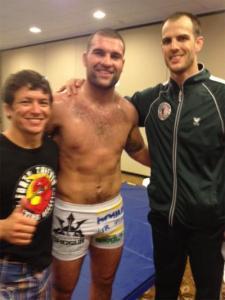 Mauricio Shogun Rua fights this weekend in the co-main event of UFC 190 but the Brazilian destroyer has had a terrible run of fights since he captured the UFC light heavyweight belt, winning only three out of his last nine bouts.

Regardless of how his fight at the weekend goes many have and while continue to call for either a retirement of the once great fighter or a potential drop and rejuvenation at middleweight. Shogun has always been one of the smaller guys at 205.

And his only hope for a title shot will come if he drops to middleweight. Here is Shogun with UFC featherweight Cole Miller, just to drive in the nail as to how small Rua is..

Duffy, the new Irish sensation, has said in the past his camp, Tristar, have mentioned a possible drop to featherweight for him and he seemed to relish the idea. Two super impressive wins at lightweight have since put a stop to the notion but I would argue that after the Poirer fight.

If he manages to get a win, would be the perfect time to announce his pending move down in weight class. He would be a fresh fighter to the division with huge momentum and a great history that could really push his career to the next level.

Vitor Belfort, the once-great Belfort looked smaller than most welterweights when he squared off against Chris Weidman and if he continues to fight a trip down in weight might be his best chance. 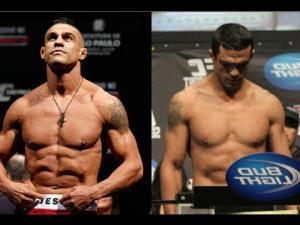 Chad Mendes, while undoubtedly one of the best at Featherweight two losses to Aldo and one to McGregor does not bode well for the Alpha Male, a trip down in weight might be an option, that’s if he doesn’t mind squaring off against Dillashaw (if he’s still champ).

Anthony Pettis, the former lightweight champ will, without doubt, make a run back at the belt but has said in the past a drop-down to featherweight was an option, a quick title shot would all but be guaranteed for the stand-up wizard.

There it is, my list of fighters who could really benefit from either going up or down in weight class. Some might agree others disagree, be sure to let me know especially if I have let any noticeable people out.