Bellator MMA hosts its first-ever card in the Big Apple this weekend at the world-famous Madison Square Garden. With a card headlined by one of the most revered faces in the history of mixed martial arts.

As Fedor Emelianenko makes his return to mainstream MMA. I say mainstream, because quite frankly, not that many US fans keep tabs on the goings-on outside of the Stateside bubble.

July 30th, 2011 signalled Fedor’s third consecutive loss on US soil. This time to Dan Henderson, who had moved up from middleweight to take on the Russian at 205lb’s. It would be the last time we saw Fedor fighting on US television. At the ripe age of 34, really not that old for a heavyweight. He made the decision to continue his career back in mother Russia.

Fedor’s plan to dominate in the US hadn’t gone according to plan. And with his move east, any hope of fight fans ever seeing him inside the famed UFC Octagon had all but evaporated too.

Back in the USSR, oops! Russia. Emelianenko managed to put together a three-fight win streak. Culminating with a vicious KO stoppage under the St Petersburg floodlights of a grizzled veteran, Brazilian Pedro Rizzo.

With the victory, Fedor finally called an end to a 12 year, 38 fight career. A fighter, so many of his own peers who are also considered greats, had chosen as their best of all time.

The mild-mannered man of few words. The humble samurai revered by fighters and fans from Japan to Jakarta. The Last Emperor Fedor Emelianenko signed off for the final time.

A recurring theme in the world of combat sports. Fighters who feel they still have something left in the tank. More to give or something left to prove!

With rumblings and whispers having reverberated around the MMA world for some time. Fedor is back! New Years Eve 2015 signalled his return to competing as he faced a fighter almost no one had heard of in Jaideep Singh.

A gimme, as they say in the business. Fedor, as expected made light work of the kickboxer. But what if anything did we learn in a one-sided bout, that really made no sense since it was the first announced. Nothing!

July of 2016, Emelianenko stepped in against the ultra-durable Fabio Maldonado. Winning a somewhat dubious decision on home soil, in a fight, many had the Brazilian winning on points. What happens in St Petersburg stays in St Petersburg! 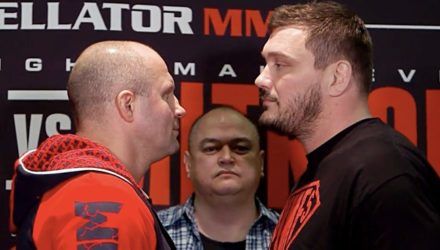 Jump forward to June 24th, 2017. As one year on, Fedor returns to US soil to stake his claim and set the record straight. As the co-main headliner at Bellator 180.

Emelianenko once again faces a dangerous big man in Matt Mitrione, “Meathead” to his fans. A fighter who made his name, albeit as the heel in The Ultimate Fighter house.

Having come to the sport pretty late in his career. Mitrione is a fighter who at least claims he’s not at all fazed by the Russian’s mystique. And you know what, I believe him.

And with that being said, he’s got all the tools and attributes to make it a very long night for Fedor at MSG. With history yet to be written. Will it be a successful return of The Last Emperor to a land which has dealt him all of his professional losses, bar one. The one we don’t really count!

How will he compete at the ripe age of 40? With the wind at his back and the crowd perhaps on his side. One more time… one last time?