Eddie Alvarez Rebounding From His Loss

Six months ago, Eddie Alvarez entered the cage for the biggest fight of his life. After slowly climbing the world ranks with classic fights in other promotions, Alvarez’s long-awaited UFC stint had been a major success thus far. After four fights inside the octagon, Alvarez had won three and was now the UFC Lightweight champion.

With a dramatic victory over the feared Rafael Dos Anjos to claim his title, Alvarez had positioned himself for a super-fight as the transcendent Conor McGregor loomed, looking to make history. The Irishman’s stock had just raised after he’d avenged his defeat to Nate Diaz by scoring an enthralling majority decision win over the courageous Stocktonite.

Though other circumstances made it look unlikely at times, all issues were eventually smoothed out and suddenly we had a fight, the Featherweight champion McGregor would challenge Alvarez for his Lightweight crown. It would take place on an event worthy of its grandeur too, UFC 205, the first MMA show in history to emanate from the historic Madison Square Garden.

At long last Alvarez had secured a major payday and he’d played his part in the promotion too, confidently questioning his challenger’s credentials as an elite 155lbs fighter. The animosity, whilst not overstated, was certainly there and now it was fight night. Time to find out the answers to all of the questions.

Many expected an instant classic but it was clear very early that wouldn’t be the case. Alvarez was determined and focused but McGregor’s poise and immaculate timing was apparent quickly as he floored the defending champion with a counter left hand. McGregor couldn’t capitalise though as Alvarez immediately scrambled to his feet.

That wouldn’t be the last time though as Alvarez was dropped twice more before the round’s end. Just like he had throughout his whole career, Alvarez simply kept getting up, refusing to fold under the immense pressure coming from his immovable Irish foe. His courage was admirable but in reality, the writing was on the wall. 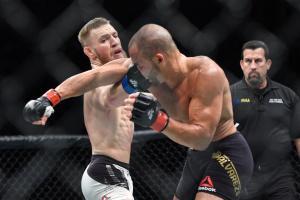 Soon the inevitable finish would come too when just over three minutes into round two, McGregor closed the show, dropping Alvarez one final time to become the UFC Lightweight champion. Post-fight, the focus was rightly on the incredible history making McGregor. Now double-champion, ‘Notorious’ spot in history was undeniable and clearly we were in the midst of witnessing someone and something very special.

The opposite side of that though, the defeated now former champion. After years of being the victor in blood and guts battles, Alvarez hadn’t done himself justice in his biggest fight on the biggest stage. Of course almost all of that was due McGregor’s brilliance but my heart still hurt for Alvarez.

A one Sided Decision

In an ideal world, the sport’s great fighters showcase everything that makes them special in front of the biggest audience but with so many dynamics and such unpredictability, that just can’t always be the case. It wasn’t Alvarez’s best night and he obviously paid for it, losing the title to his rival in one-sided fashion.

However, to the surprise of no one, Alvarez isn’t prepared to leave on that note and now returns this Saturday night to take on Dustin Poirier in the FOX Sports 1 headline prelim. It’s a tough match that will likely shape Alvarez’s future but regardless of what happens next, we shouldn’t ignore what the Philadelphian has already achieved.

Whether it be trading knockout punches with Tatsuya Kawajiri in an instant classic, making MMA magic with Michael Chandler or more recently vanquishing Dos Anjos with a frenzied flurry, Eddie Alvarez has given MMA a lot. Granted not all of his highlights have occurred inside of the UFC’s octagon but that doesn’t change the spirit, courage and heart that Alvarez fought with, whether it be in a ring or cage.

Eddie Alvarez’s spot in history is pretty secure and now it’s more a question of potentially adding to it. If that’s the plan it must start with a victory over Dustin Poirier Saturday night so for now, the focus is firmly on the blockbuster UFC 211 event.

Images courtesy of skysports.com and washingtonpost.com