This Sunday night in the UFC fight night main event, two fighters with the same goal will meet, their journeys almost complete opposites. In a clash of fringe Heavyweight contenders, Derrick Lewis looks to continue his ascension of the top 15 as he takes on Travis Browne, a man capable of brilliance that has recently struggled.

Whilst it may not be an awe-inspiring headliner on paper, there is a certain intrigue to the crossroads fight. The Heavyweight division is certainly in need of contenders and though these two names may not be everyone’s first choice, a win here for either could elevate them dramatically in both momentum and stock.

Just eighteen months ago, the idea of Derrick Lewis in the main event spot didn’t look a likely one. Coming off of a stoppage loss to UFC veteran Shawn Jordan, Lewis was now 3-2 inside the octagon. His momentum had definitely somewhat stalled following an impressive start to his UFC stint.

At this time Browne himself was coming off of a stoppage loss, a surprising defeat to Andrei Arlovski. The fight had been a dramatic one as the assured former champion walked Browne down, rocking him badly with regularity. There was a stunning moment of success for the wobbled Browne though, as he dropped Arlovski himself. However, it was too little too late as Arlovski recovered and finished ‘Hapa’ after almost five minutes of chaos.

Even though it had been a disappointing loss for Browne, his standing as a contender still remained. That had only been the third defeat of his career and was outweighed by eight victories inside the octagon, including superb knockouts over legends Josh Barnett and Alistair Overeem. Nonetheless, there were some concerns surrounding Browne’s alarming showing.

It had been just the second fight under the tutelage of polarising coach Edmond Tarverdyan for the Heavyweight, and his issues with Arlovski’s boxing were certainly somewhat surprising. Nonetheless, as history has shown so many times before, sometimes in MMA craziness simply occurs and not everything makes sense. Time would tell.

Either way in October 2015, Derrick Lewis would return to the octagon to stop Viktor Pesta in the third round. It hadn’t been a spectacular performance exactly from ‘The Black Beast’ but he eventually found the finish and put himself back in the win column. Three months later and Browne would too make his return, fighting Lewis’ old conqueror Matt Mitrione.

After a troublesome start in which Browne found it hard to find his range, eye-pokes would change the fight as a suddenly blinded Mitrione was left almost defenceless to force a 3rd round stoppage. Though he was officially a winner, Browne’s stock certainly hadn’t gone up. The focus was on the undeniably poor officiating and prior to the fouling, Browne’s showing hadn’t been particularly impressive.

Weeks later and Lewis would make it two straight, using aggression and scary physicality to absolutely overwhelming Damian Grabowski in just over two minutes. The performance seemed to represent real progression for Lewis, he had looked more comfortable and imposing than ever before.

That sudden forward momentum would continue too, as two months later Lewis brutally knocked out veteran Gabriel Gonzaga. In a somewhat stagnant Heavyweight division, Lewis had now emerged as one to watch outside of the familiar faces taking up much of the top 10, even if the competition hadn’t been great.

In the biggest fight of his career to that point, Lewis would overcome a grappling disadvantage to narrowly take the decision with aggression on the feet. It was hard, tough and at times torrid but nonetheless, ‘The Black Beast’ had made it four straight and took another step forward in his climb of the Heavyweight ranks.

Two days later and Travis Browne would make the walk for his clash with Velasquez, a fight that could rejuvenate his credentials as a top contender. After a solitary hard right hand though, Browne’s success was minimal and he quickly unravelled under Velasquez’s immense and intense pressure. With just seconds left in the opening round, it was all over and Browne had suffered another disappointing setback. 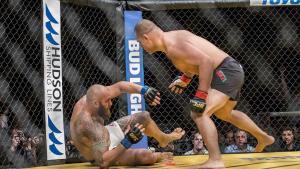 It’s important that we remember that there’s never any shame in losing to one of the best Heavyweights of all time but there was a certain lethargic look to Browne that seemed to be becoming permanent. Fortunately, Browne wouldn’t be out of action for long, stepping in for Ben Rothwell to rematch Fabricio Werdum in September 2016.

The first fight between the two had been a number one contender bout and Werdum’s victory that night would lead him to UFC gold. Browne had started well on that night but quickly faded and sustained great punishment on the way to a one-sided decision loss.

That defeat had led to Browne’s move in camp and this rematch represented a chance to erase not only that first encounter but all of the negativity that had come since.

Fighting a seemingly under-par Werdum, Browne’s struggles continued. There seemed to be aggression missing as Browne meandered through the three rounds, unable to mount any real success, which in fairness was understandable considering the gruesome finger injury he sustained early on.

It was another hurtful loss and some bizarre post-fight shenanigans between Werdum and Tarverdyan only added to the disappointment. It felt like Browne had lost everything that once made him so special, he was no longer a dynamic kickboxer, now instead of a flat-footed boxer. His offence felt so much more limited and predictable.

Once again though, it’s only right to point out that these limitations are highlighted by how elite Browne’s competition has been as of late. Either way, as Browne’s befuddling decline, seemed to continue, Lewis’ gradual ascension only progressed.

In the Big Main Event!

On December 9th 2016, Lewis would compete in the first main event of his UFC career. It would be disingenuous to claim that this was a major UFC show but his spot in the main event was still a credit to his recent four-fight win streak. Lewis had emerged as a genuine factor in the division, both due to his in-cage performances as well as his personality outside of it.

In fairness, his fight with Shamil Abdurakhimov that night wouldn’t really catch fire and Lewis certainly had some serious issues early, losing the first three rounds of the fight. Lewis would take advantage of his first 5 rounder inside the octagon though, rallying in the fourth and finish his foe with ground and pound.

This Sunday night, Lewis steps into his second main event spot when he fights a desperate Travis Browne. The last time Browne headlined he was one fight away from a title shot, he now finds himself fighting for his future as a contender of any kind. This is undeniably a match-up of a fighter that’s moving forward against one that’s been dropping downwards.

However, Browne’s losses have come at a level higher than anything Lewis has experienced or shown before. Regardless, whilst their routes to this point have been almost complete opposites, their ideal destination is the same: challenging for UFC gold. If either is to ever do that, a win here is frankly imperative.