Tyron Woodley Is not a big draw

Last Saturday at UFC 228 submitted the undefeated Darren Till in the second round to earn his fourth straight title defence. This arguably cements him as a top 3 all-time welterweight. A return to form for the once prolific finisher, the charismatic and well-spoken Tyron Woodley now finds himself with total backing from the UFC machine as they prop him up as their next star. Oh, wait… That’s not happening at all, because Dana White hates him.

the Imaginarium of dana white

As Dana White wrapped the belt around Tyron’s waist last weekend, it wouldn’t take a body language expert to recognise his expression was not one belonging to a proud boss.

Dana then exited the venue instead of sticking around for the post-fight press conference as he usually does, presumably leaving a trail of salt in his wake.

To be fair, we don’t know if he didn’t have some kind of personal emergency, but when you spend fight week verbally trashing the champ to anyone who will listen it’s difficult to avoid being the subject of a few memes.

White and Woodley have a history, most of the heat being generated by “the Chosen Ones” last two title fights. The high stakes tactical affairs against Stephen “Wonderboy” Thompson and Demian Maia were efficient nights at the office for Tyron as he took no damage.

This came at the cost of his output, as the Maia fight at UFC 214 set a record for least amount of strikes attempted in a UFC fight. The notoriously bloodthirsty Dana White was none too pleased by this and has since made it his mission to disparage and discredit the champ ever since.

As recently as last week Dana was individually telling each media outlet why Tyron Woodley is not a big star. He told Megan Olivi, “There’s been plenty of opportunities for Tyron Woodley to become a big star, but he always likes to shoot himself in the foot.”

Now, the fans were quick to condemn Woodley as a boring fighter after two back to back “snoozers”, so White isn’t alone in his assessment, but is it not a promoter’s job to convince the fans that they want something, despite perceived flaws? That’s a trick question, yes, that is exactly the job of a promoter.

Getting Tyron Woodley out of the picture 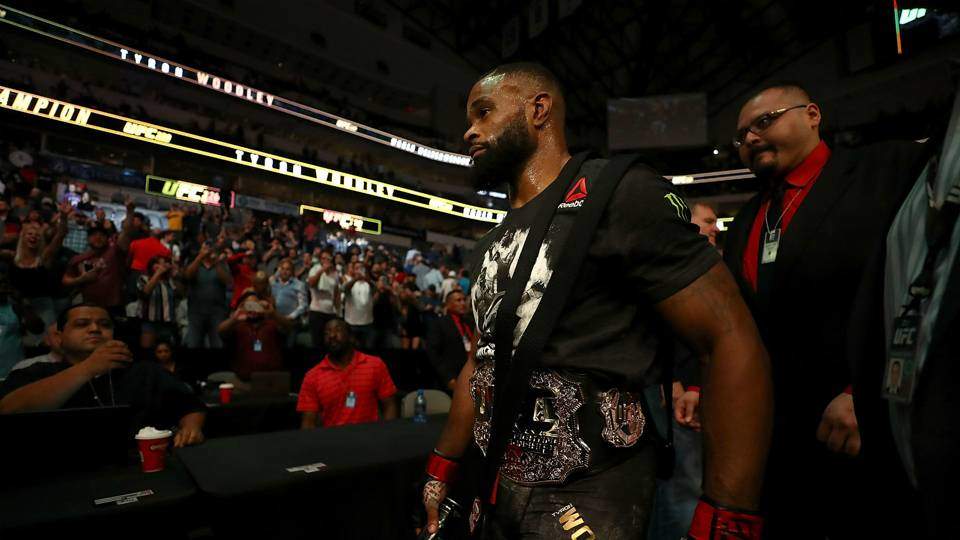 When it comes to Tyron Woodley and Dana White, this seems personal. For one, Dana has made it a habit to publicly trash fighters whenever they don’t perform like he expects them to, so that’s nothing new.

But ever since Woodley won the title he made it extremely clear he wasn’t a yes man. If that’s anything Dana hates more than a boring fight, it’s someone who won’t kiss the ring. Prior to UFC 226, Brian Ortega refused to fight any replacements for Max Holloway.

Dana spent half a press conference passive-aggressively admonishing him and chastising his manager. This isn’t new behaviour.

So, Tyron is “boring” and “difficult”. Enter Darren Till, an exciting and confident Muay Thai striker from England, one of the UFC’s most important markets. Never mind that he’s missed weight twice or his fight with “Wonderboy” was just as “boring” as Woodley’s (BTW, how else is one supposed to beat Thompson?).

He’s a golden ticket to a key market and he speaks well and fights well. Give him a title shot and he’ll get Woodley out of our hair and be a new marketable champion.

Woodley is Here to stay

That didn’t happen. Woodley has now strengthened his stranglehold on the welterweight division and Dana has to eat his words… or just leave and sulk. Most promoters would use this dominant performance as evidence that Tyron isn’t what everyone says he is. Not Dana.

Unfortunately, the UFC president is just as petty as many of the internet fans and frankly, it isn’t fun anymore. The man’s transparent and impassioned opinions are likely a reason so many people gravitated to him in the early days, but as the sport has evolved so have the fans. Do we still want a president so controlled by his own ego he can’t see what’s right before him? I don’t think we do.

Surely a promoter needs to work with what he’s got. You can control most things in the fight game except the fight itself, and Tyron is a truth-teller in that octagon. He is the best welterweight in the world and Dana White needs to accept that.

Either swallow your pride and back him or take it in the wallet, as I have a sneaking suspicion the “Chosen One” will be ruining more weekends for the President for years to come.