Check out Part 1 of the interview here.

This is part 2 of MMAMicks’ interview with DADA 5000 who will be fighting none other than Kimbo Slice at Bellator 149. Check out what DADA 5000 says about his opponent and their on-going dispute and more.

How did the relationship between Kimbo Slice and yourself begin and is there still a sincere feud, or grudge between you and Kimbo?

Yes, there is man. I’m glad you asked that. We both grew up inside the same community of the Miami, West Perrine area. He stayed right up the street in a two-bedroom community complex with his family. Then when the opportunity arose they moved into a three-bedroom home that was still inside West Perrine.

So same school buses, same schools, same streets; we grew up knowing each other very, very well. Everybody knows him as Kimbo Slice, I know him as Kevin Ferguson.

When he got an opportunity to fight Ray Mercer, I was in the same backyards as he was. I was giving this guy tips and pointers on how to actually market himself and to be great! So when he came to me and was like “Yo DADA, I want you to roll with me.” I gladly accepted, you know, cause I was a friend!

I went, not for the monetary gain, because there was none. I came on board because I’m a real friend man. I watched you since day one man, you know, develop. And it’s an honour because I understood. But I could see the trees despite the forest.

The thing was he got all these guys surrounding him now. I’m the one with sense, the only one speaking with logic. And all of the great things that I’ve done, believe it or not, and regardless of how many people it stunned and shocked, it wasn’t a surprise to Kevin Ferguson. Because he knew that I had something up here (Points to his head), which is the same thing that I’m going to utilize to cause his demise.

Now, individuals knew they needed to get rid of DADA because we can’t get to Kimbo because DADA’s going to see through the Bull crap. So they started putting funny things inside of his mind. He knew me, and instead of him coming to me to ask me about certain things, he just started doing sneaky/sly type stuff. And real recognize real, and I couldn’t understand that for the life of me. I caught those dudes talking about me several times.

When we were out in Corpus Christie, Texas where he (Kimbo Slice) was fighting Bo Cantrell. Those individuals were poisoning my name, damaging my credibility and my character. They said “You got to watch DADA 5000. This dude is nasty. He’s going to take your spot!”. Kimbo, you know me better than anybody inside that room. They just met you. You been knowing me my entire life. So you take these stranger’s word over mine?!

God don’t make no mistakes! If I didn’t witness this with my own eyes, I would have gotten hurt. We’re shifting around, we’re moving. “DADA go at 40%!” and then you’re trying to take my head off! But I knew that you had bad intentions because God put me in a position to understand and to witness what I witnessed.

Trying to Set Me Up!

You’re trying to set me up. Your guys have me going certain places and you’re setting up fights for me and I know nothing about it! So I’m really fighting off of the principle of respect. So there’s no monetary gain involved or nothing. And I’m like “If I’m your boy if I’m on your team; you don’t gotta set me up!”.

You know I fought for these guys a few times and they never showed the public any of the footage. So I said to them (Kimbo’s entourage) “Listen, I’m your boy now, at least let me see the footage.” And they would tell me “Yeah we’re going to let you see it!”. But they were lying, they’re full of it. They’re liars, they’re bad people, and they’re very selfish.

Kimbo Slice tried to shut the door on the backyard. He didn’t want anybody else to go through it! He’s a hypocrite, he said something in the Miami Herald. He said these words “There’s a little something going on in West Perrine right now. It’s illegal, I don’t condone it and I wish it would get shut down. If I could do all over again I would train in a dojo. I would go to an MMA facility.”. You’re a damn liar, you damn hypocrite. You wouldn’t be as big as you are if you would have taken the legitimate route!

Anything I put forward they (Kimbo’s entourage) didn’t support it. But I knew better, and when I got back I told him “Hey, the best part of this conversation gentleman is that you will never have to have it again. I’m done.”

They told me I made the biggest mistake of my life that day. I still ask them if they really think that was the biggest mistake of my life. I went very big on ESPN four times, covered two editions of Rolling Stones, Maxim, National Geographic, Vice Media, Taboo USA, EA Sports, NBCC, CNN, ABC, Major Motion Picture. My accomplishments to this day still trump his (Kimbo Slice)

How have you changed your training in preparation for this fight?

I’m taking it more serious. I’m still inside the backyard of course. But I’ve backed away from the Krispy Kreme doughnut shops!

But I am working on various things. Hardcore strength and conditioning training. I love the fresh air, love the outdoors. But you know, I’m not really focused on him (Kimbo). I’m not preparing for him; this is a personal goal for myself. I know what he brings to the table, I know what he’s got, and what he don’t got.

I’m just really focusing on destroying this guy, you know what I’m saying. Hitting to hurt with bad intentions. They call Kimbo Slice a bear, but you see this left hook or this right uppercut is going to hibernate that fellow for the rest of his life.

See he’s talking a lot and that’s only because he’s a scared man. There’s no respect for the disrespectful.

I’m a sharp individual, I’m devising a plan that’s going to fit him like a glove. And that glove is called DADA 5000. He needs to start planning his Eulogy now because he will not win this fight.

Do you think anything will change between you and Kimbo after the fight? Regardless of the outcome. 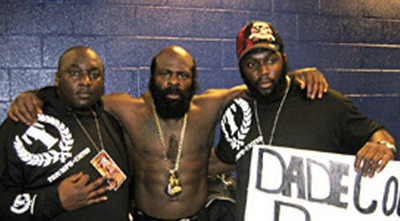 Well, we don’t lose and we don’t go back. If you’ve seen any of my fight footage I attack. If you look at Roman soldiers; they were only protected from the front. If you died from getting a spear to the back, you were deemed a coward!

We move forward, maybe side to side, but, no going back.

Am I one and done? I will say this, no I will not be one and done. You know how it is when you get the taste of blood back in your mouth, you start back killing, you can’t stop. So for him, he’s going to be in a world of hurt, a world of trouble.

My tip for the ambulance and the medical personnel for this fight is to keep the bed ringside for that guy because he’s gonna need it.

The feud between us is for real. I’m trying to hurt him and he’s trying to hurt me. I’m coming out to enforce my will and to put him down. How I look at it is like this, I’m gonna hit him with the right or the left, to the body or the head and If he doesn’t die, then the stuff he better lay down and acts dead. Because this is nothing but blunt force trauma.

His mouth is writing a cheque his mouth can’t cash. He’s going to get a cheque and it’s going to be a reality check!

Also on the card is Shamrock Vs. Gracie. What do you think of the fight and who do you think is going to come out with the win?

Both of those guys are pioneers and no disrespect to them but everybody out there is talking about DADA 5000 vs. Kimbo Slice. This is the newer generation, although Kimbo Slice is probably as old as the slippers that Jesus had on. They say Ken Shamrock is old but so is Kimbo Slice. Every time I look, his age is going down. I’m like what the f aha. This guy took too many hits and forgot how old he is!

But I met Ken Shamrock and we spoke briefly and just to be in the presence of those guys is heroic and historic. And I think this one is going to be one for the ages. Royce Gracie is a tough dude but I think that fight could go any way. I’m a fan of both of them so may the best man win.

There was a lot of talk about the Kimbo Slice vs. Ken Shamrock fight perhaps being rigged. What’s your take on the fight and do you think it was fixed?

Of course man, Shamrock is in his fifties and there not going to be blowing up his phone for too much longer. Who else is he going to fight after this fight with Royce?! Even if he beat Kimbo, both of there careers are still over.
What still bothers me about the Kimbo and Shamrock fight is that you never forget how to put a guy inside a friking chokehold!

Hell, we already know that Kimbo has a track record with this kind of stuff. When he fought Houston Alexander, you know Houston is the executioner! But he ran away the whole friking fight.

A Lot of Fishy Things Going On

There’s a lot of fishy things that happened in this guy’s career. They’ve been babying him, trying to buy him some time and obviously he still never got it together. I’ve been with him since day one so I know they play dirty, I know they don’t mind throwing bribes out, I know they paid a couple of guys off, but none of that stuff is going to help him. He’s more valuable to me knocked out, face down and butt up in front of the entire world.

I just want to say this, stay tuned for the biggest movement in the world, bybextreme.com. You know, DADA 5000 is on Youtube, follow the DADA 5000 Facebook page, Instagram page and Twitter. We are in a position to do some great things and we’re giving individuals opportunities to live their lives. We’re large, we’re respected all over the country and we’re not showing any signs of stopping anytime soon.

Part 1 of the interview can be found here.