A dark cloud of trepidation hangs low over this coming weekend’s historic championship bout. For the first time in the Ultimate Fighting Championships, two female fighters will contest the 145lb featherweight title. With Holly Holm (10 – 2) facing Germaine De Randamie (6 – 3) to decide who will be the very first to hold the belt.

The women’s 145lb division has been somewhat of a touchy subject for the UFC President Dana White. Who was from the outset, very reluctant indeed to give the green light. His reasoning? Quite frankly the talent, or lack there of.

Holly Holm has been fighting at 135lb’s since joining the UFC, a weight she has often looked pretty rough in making. While having already tasted great success, holding and subsequently losing the belt. As well as currently being on a two fight losing streak. Holm now finds herself in the somewhat odd position of fighting for the inaugural 145lb strap.

Conspicuous by her absence… 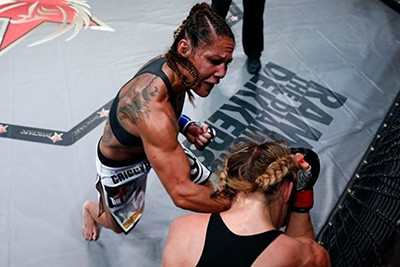 In reality the fighter who should have been her opponent in this bout, the woman for whom this new division is to be built around. In much the same way 135lb’s was for Ronda Rousey. That fighter in question is glaringly conspicuous by her absence. Many have wondered why is it that Cristina ‘Cyborg’ Justino (17-1) would not be inside the octagon on February 12th. One of the most feared fighters on the planet and the presumptive queen of the division. Cyborg had decided to choose her health and wellbeing over the inaugural title fight and really who could blame her.

MMAFighting reached out to find out what the fighter had to say. And in a lengthy and detailed official statement we learnt the full extent of the story.

“In my last weight cut I almost died. I was in the bathtub cutting weight, and I thought, ‘I will die in this bathtub.’ It was the worst weight cut in my life. My nutritionist George Lockhart, who, by the way, is a UFC employee, didn’t do an effective job with this birth control pill he indicated saying that would help me. But thank God, in a war, I made weight, cutting 24 pounds in a week. My body was retaining a lot of water. The last time I spoke with George Lockhart was in the locker room before my fight. He disappeared after the fight. I’m not working with him anymore.

For the first time I didn’t warm up in the locker room like I do for every fight because I was too weak. I was just praying for God and went for the fight, and, once again, God gave me the victory. After all this, I went back to my hometown on Sunday and I felt sick on Sunday. My mother gave me tea and I fell asleep. The next day, like I always do after my fights, I did blood tests to see if everything was okay after a terrible weight cut. And for the first time, the nurses couldn’t take my blood, it was so thick it wouldn’t come out, so we couldn’t do tests. I was in treatment for 10 days with Dr. Ulisseia. I was in observation because I was feeling sick all the time.7

“You can see that I give no interviews after the fight. I told UFC Brazil PR Lilian (Caparroz) that I wanted to cancel all my interviews and couldn’t travel. After all that, at home, I decided I would not fight at this weight anymore, that I would only fight at my division. And only with 12 weeks’ notice. For my last fight, they told me eight weeks before.

I got a call from the UFC offering me another catchweight fight, and I said I would not fight at this weight anymore. I needed a break to get my health back to normal because my body was weak, I was anemic.

After that, they invited me to fight again, but this time at my weight and for the belt, but with 10 weeks’ notice. Knowing that I was recovering, like I said, I told them I can fight anyone in March, but I need to take care of my body, and no mention of the fact that I’m dealing with severe depression and can’t have another brutal weight cut like before. This decision is more important than the belt or the division, I’m thinking about my health.
I thank my fans. We did it! I’ll soon be fighting in my division, where I’m the world champion. You and God are loyal. I’ll be ready to fight in March.”

If you have seen the raw footage of cyborg’s brutal weight cut, it’s pretty tough to watch. I’m no expert, but I am pretty sure the human body can only take so much repeated severe and chronic dehydration, which she had to endure to make that 140lb limit.

As fight fans, all we should want to see back inside the octagon is a 100% healthy, fit, ferocious and perhaps most important of all, happy Cris Cyborg. A destroyer of world’s and one of the most feared competitor’s in the sport. Who will be the heir apparent to the featherweight crown when she finally returns to action in March 2017. We can only make some educated guesses as to her mindset after being forced to stand by while the belt gets raised inside the octagon by someone other than her. Who’s going to have the unenviable task of defending that throne when she is once again ready to compete… who can?