You might have missed it over the weekend. But Cris Cyborg Justino got yet another world title fight under her belt. This time it wasn’t in mixed martial arts competition, but rather Muay Thai. For the inaugural Lion Fight women’s welterweight title. 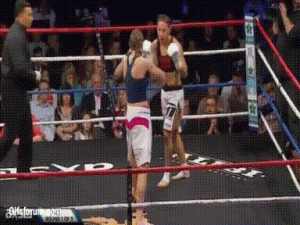 Entering the fight as the heavy favourite, Cyborg looked to add yet another title to the list. But! it just wasn’t to be! Her opponent on the night, Dutch fighter Jorina Baars, who is ranked number one in the World in Muay Thai, put on an absolute clinic. Making the standup of Justino look pretty average, to say the least. Her crisp jab, kicks and beautifully delivered knees led to a number of knockdowns throughout the fight.

With only ever a few instances where Cyborg managed to catch the Dutch woman with a clean shot. There was a very obvious gulf in the level of striking between two of MMA’s and Muay Thai’s elite. With Cyborg using her physical strength to try and bully Baarswhere possible. Cyborgs aura probably didn’t receive much of tarnish due to this only being her third ever professional Muay Thai fight, for some, it may have even grown.

And although she doesn’t consider herself a MMA fighter, Baars has already dabbled a little in the sport with a professional record of (1-3-0). But as she alluded to on MMA Junkie Radio, her main focus at least for now is Muay Thai and that’s the way it’s going to stay for the foreseeable future.

So what if any effect does this result have on Cyborgs push to fight UFC‘s bantamweight champ, Ronda Rousey? With the latest rumour being touted that Gina Carano will come out of semi-retirement to fight Rousey for the belt at UFC 175. Although there maybe something a little bit suspicious about the supposed breaking news on April fools day.

With such a long layoff, would Carano be any real competition for Rousey? Although it would be a huge draw and possibly the biggest women’s MMA fight to date. Would it really be a competition or just a big payday for the UFC. And it would really beg the question. Is the UFC looking for someone to really put it on Rousey or are they just looking to sell PPV? You can decide that one for yourself.

But one thing is for sure. The majority of male fans want their female fighters to be tough, but at the same time retain their femininity sex and appeal. It’s what separates them from the male fighters in the sport. Take that away through the abuse of steroids and PED’s and they become far less desirable or marketable.

So perhaps that has something to do with the reluctance of the UFC to embrace Justino with open arms. It wouldn’t be outside the realms of possibility for the UFC to be planning well past a potential super fight with Cyborg. And what forms her promoting and merchandising would take in a sport with a predominantly male fanbase. Not quite sure where Cyborg fits into this long term picture.